The lateral metalation-electrophilic trapping reaction of alkyl-substituted pyrazines has always been challenging and poorly regioselective, with the corresponding derivatives often being isolated in moderate yield. In this contribution, we first report on the preparation of an unsymmetrically-substituted pyrazine, that is 2-diphenylphosphinomethyl-3-methylpyrazine, by subjecting to metalation with n-BuLi the commercially available 2,3-dimethylpyrazine, followed by interception of the putative lithiated benzyl-type intermediate with Ph2PCl. Such a functionalization has been successfully carried out in the absence of additional ligands, working either in THF at −78 °C or in a more environmentally friendly solvent like cyclopentyl methyl ether at 0 °C, with the desired phosphine derivative being isolated in 70–85% yield. The newly synthesized adduct has been fully characterized by means of multinuclear magnetic resonance spectroscopic techniques, and also by preparing a selenium derivative, which furnished single crystals that were suitable for X-ray analysis.
Keywords: pyrazines; lithiation; organophosphorus compounds; heterocycles; X-ray diffraction studies; NMR studies pyrazines; lithiation; organophosphorus compounds; heterocycles; X-ray diffraction studies; NMR studies

Pyrazine-based skeletons are present in many natural bioactive products and have been extensively incorporated in clinically used drugs and molecules exhibiting noteworthy antibiotic, antifungal, antitubercular, antidepressant, antineoplastic, diuretic, antiulcerogenic, and anti-infective effects [1,2,3,4,5,6]. Moreover, they can also serve as important building blocks for the preparation of dyes and electroluminescent materials, and were found to act as suitable ligands in coordination chemistry [7,8,9,10,11,12].
Heteroatom-promoted lateral lithiation of benzylic alkyl groups closest to the heteroatom, followed by trapping reaction with electrophiles, represents a valuable tool to elaborate (hetero)aromatic systems by providing either a chain extension at the benzylic position or the synthesis of fused carbo- and heterocyclic systems via the annulation of chain-extended adducts [13,14,15,16].
Among nitrogen-containing heterocyclic systems, lateral metalation of pyrazines-bearing Me groups has largely remained unexplored [17,18,19,20,21]. Kamal and Levine pioneered the use of sodium amide in liquid ammonia to promote acylation, alkylation and hydroxyalkylation reactions of dimethylpyrazines [22,23]. Later on, Houminer et al. prepared 2-(2-hydroxy-2-arylethyl)pyrazines by benzylic lithiation of alkylpyrazines with lithium diisopropylamide (LDA) in ether or diglyme, followed by electrophilic interception of the corresponding anions with aromatic aldehydes, with the desired adducts, however, being isolated in poor-to-moderate yields (25–60%) [24,25].
Based on our long lasting interest in the functionalization of heterocycles by direct [26,27,28,29,30,31,32,33], ortho- [34,35], and lateral [36,37] lithiation reactions, we became interested in synthesizing a pyrazine derivative incorporating a phosphine unit into its scaffold as transition metal-phosphine complexes are known to be powerful catalytic tools for numerous C–C bond-forming reactions in modern organic synthesis [38,39,40,41].
In this Short Note, we report on the synthesis and the structural characterization of a novel, unsymmetrical diphenylphosphinomethyl pyrazine (2), by selectively deprotonating one of the methyl group of 2,3-dimethylpyrazine (1) with an organolithium compound, followed by trapping of the resulting putative lithium intermediate 1-Li with diphenylchlorophosphine (Ph2PCl) (Scheme 1). A comparison has been made on the effectiveness of using more eco-friendly solvents in place of traditional volatile organic compounds (VOCs). To date, only symmetrical pyrazine-based aryl- or alkyldiphosphines have been made accessible when using in the deprotonation reaction of the corresponding precursors a mixture of n-BuLi and tetramethylethylenediamine (TMEDA) as a privileged ligand, and working in ethereal solutions of VOCs at −78 °C [42].

Treatment of a solution of 1 in THF with n-BuLi (1 equiv) (1.4 M solution in cyclohexane), under Ar at room temperature (RT), followed by dropwise quenching with Ph2PCl (1 equiv) in THF after 45 min, gave no reaction. Lowering the temperature to −78 °C was found to be similarly ineffective. Pleasingly, upon first stirring a THF solution of 1 with n-BuLi for 45 min at RT under Ar, and then adding dropwise the resulting mixture to a pre-cooled (−78 °C) THF solution of Ph2PCl, adduct 2 could now be isolated in 85% yield (Scheme 2a). The latter was fully characterized by multinuclear (1H, 13C and 31P) magnetic resonance spectroscopy (Supplementary Materials).
Further characterization of 2 came by allowing it to react at RT with chalcogens like selenium (2 equiv) directly in an NMR tube, and subsequently monitoring the appearance of phosphine selenide 3, which formed with >98% conversion within a few minutes (Scheme 2c). The structure and the connectivity of 3 were unambiguously assigned by means of mono- (1H, 13C, 31P and 77Se) and two-dimensional ((1H-1H)-COSY, (1H-13C)-HMBC and HMQC)) NMR techniques (Supplementary Materials), and by X-ray analysis (Figure 1 and Supplementary Materials). The major resonance displayed in the 31P NMR spectrum at δ 32.4 (C6D6) is that typical of phosphine selenides [43]. 31P-77Se NMR coupling could be seen either in 31P NMR spectrum as satellites (1JP-Se = 756.3 Hz) or directly in the 77Se NMR spectrum (Supplementary Materials).
Upon switching THF for an environmentally friendly solvent such as cyclopentyl methyl ether (CPME) (relatively high boiling point, non-inflammability, low toxicity and low peroxide formation rate, and stability under acidic and basic conditions) [44], compound 2 could be isolated in 70% yield when a CPME solution of 1-Li (prepared by reacting 1 with n-BuLi (1.4 M in cyclohexane, 1 equiv) and aging the resulting solution at 0 °C for 45 min) was cannulated into a solution of Ph2PCl (1 equiv) in CPME, which was kept at 0 °C (Scheme 2b).

A suitable crystal of 3 immersed in perfluorinated oil was mounted and measured by means of an Oxford Diffraction Excalibur diffractometer equipped with a Spellman generator (50 kV, 40 mA) and a Kappa CCD detector, using MoKα radiation (λ = 0.71073 Å). Data collection was performed with the program CrysAlis CCD. Data reduction was carried out with the program CrysAlis RED (CrysAlis RED, 2006) [46]. The intensities were corrected for Lorentz and polarization effects, and an absorption correction based on the multi-scan method using SCALE3 ABSPACK [47] in CrysAlisPro was applied. The structure was solved by direct methods using the program SIR97 [48], refined by means of full matrix least-squares based on F2 using the program SHELXL-97 [49], and checked with PLATON [50]. Non-hydrogen atoms were refined anisotropically. Hydrogen atoms involved in hydrogen bonds were located in the Fourier difference map. Data collection and refinement parameters are given in Tables S1–S4 (Supplementary Material). Interactions between selenium and the neighbouring protons are shown in Figure S13 (Supplementary Informations). Illustrations of the molecular structure were drawn with DIAMOND [45]. CCDC-2092648 contains supplementary crystallographic data for this compound. These data can be obtained free of charge from The Cambridge Crystallographic Data Centre via www.ccdc.cam.ac.uk/data_request/cif [51].

3.2. Synthetic Procedure for the Synthesis of 2 in THF

To a solution of 1 (18.55 mmol) in 30 mL of dry THF, n-BuLi (1 equiv) (13.25 mL of a solution 1.4 M in cyclohexane) was rapidly added under Ar at RT. The resulting dark red mixture was vigorously stirred for 45 min. This solution was then cannulated into a pre-cooled (−78 °C) THF solution of Ph2PCl (1 equiv) (18.55 mmol in 20 mL of dry THF) under Ar. The mixture was allowed to warm to RT. After 4 h, the organic layer was filtered through a silica pad under Ar, using ethyl acetate as the eluent. The solvent was removed under reduced pressure to provide the desired product 2 in 85% yield.

3.3. Synthetic Procedure for the Synthesis of 2 in CPME

3.4. Synthetic Procedure for the Synthesis of 3

The preparation of an unsymmetrically substituted pyrazine, 2-diphenylphosphinomethyl-3-methylpyrazine, was presented, by subjecting to lithiation the commercially available 2,3-dimethyl pyrazine followed by an electrophilic interception of the putative benzyl-type intermediate with Ph2PCl. The chemical structure of the synthesized adduct was unambiguously secured by using NMR and mass techniques, and by preparing a selenium derivative, which furnished single crystals that were suitable for X-ray analysis. The described lateral lithiation/functionalization was proven to be regioselective in the absence of additional ligands, and was successfully achieved either working in a VOC such as THF at −78 °C (85% yield) or in an environmentally friendly solvent like CPME at 0 °C (70% yield). Further investigation is in progress to prepare transition-metal complexes of such a P,N-heterocyclic phosphine motif to investigate their biological properties and their applications as auxiliary ligands in organometallic catalysis.

This work was carried out under the framework of the National PRIN project “Unlocking Sustainable Technologies Through Nature-Inspired Solvents” (Code: 2017A5HXFC_002) and financially supported by the University of Bari.

The data presented in this study are available in this article and in its Supplementary Materials. The X-ray data are deposited at CCDC as stated above.

University of Bari and Ludwig-Maximilians-Universität München are gratefully acknowledged for participating in an Erasmus scholarship programme. 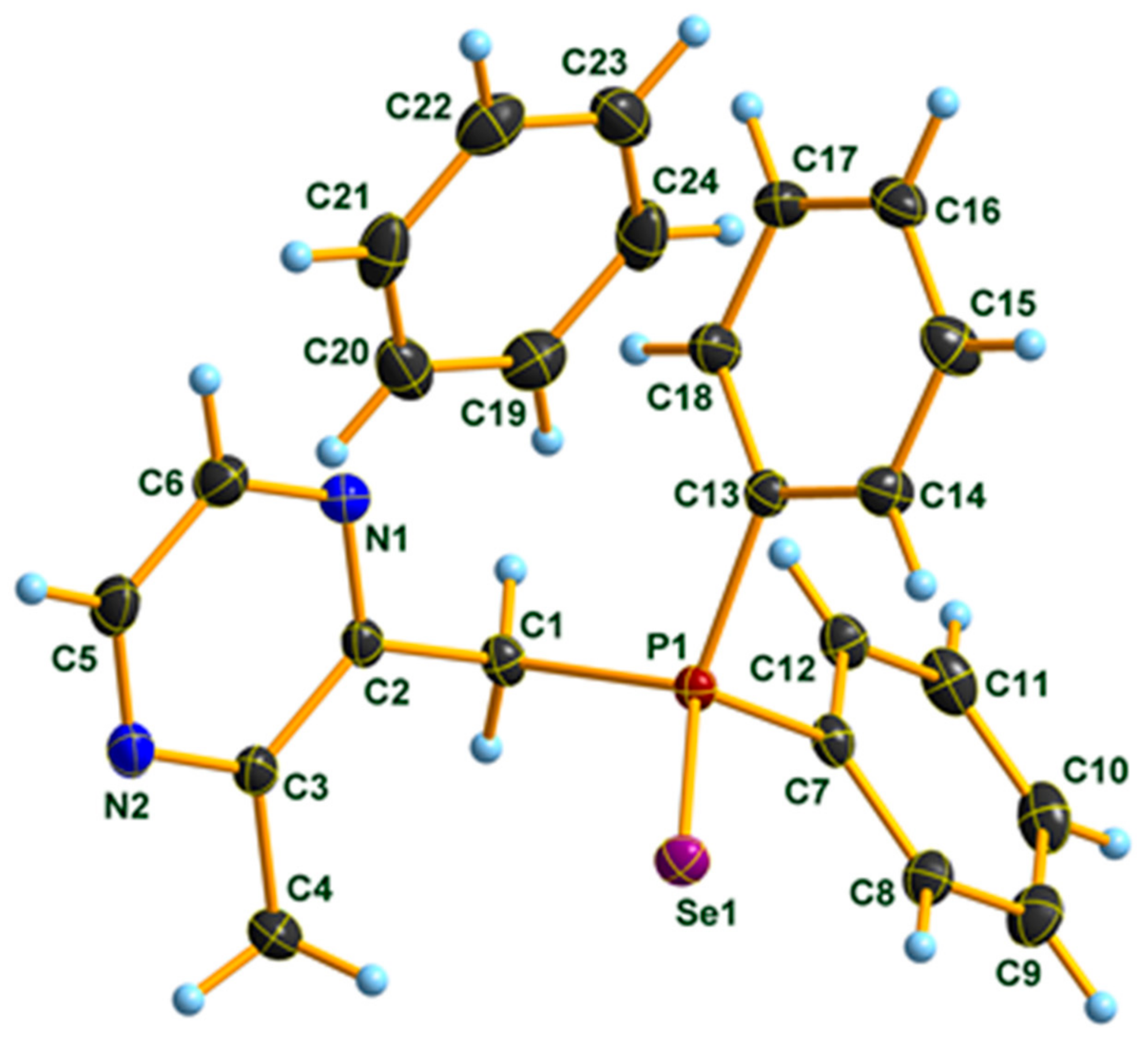