Copper is an essential trace element. It plays a fundamental role in our metabolism, since it is important for the structural and catalytic properties of many proteins and enzymes that are crucial for the normal growth, development and functioning of living organisms [1]. At catalytic sites, copper often participates in the electron transfer in oxidation-reduction reactions [2], exploiting a facile conversion between the oxidized +2 and the reduced +1 state. The biological role of copper is one of the main reasons for the great interest in its coordination chemistry. Copper(II) has a d9 electronic configuration. In complexes, it can be coordinated by four, five, or six donors. Due to the Jahn−Teller effect, the geometries are often distorted. Typically, the axial bonds of the octahedron are lengthened. Such a coordination pattern is known as the “4 + 2” coordination. In the extreme, the axial ligands are lost with a square planar geometry as the end result [3]. Copper(II) ions have an unpaired electron and are therefore paramagnetic [4]. According to Pearson’s classification of hard and soft acids and bases, Cu2+ ions are borderline [5]. Thus, they do not have great preferences towards donor atoms, but nevertheless oxygen and nitrogen ligands predominate [4].
Quinaldinic acid (IUPAC name: quinoline-2-carboxylic acid), shown in Scheme 1, is a structural analogue of picolinic acid (IUPAC name: pyridine-2-carboxylic acid) which has found wide use in the coordination chemistry of many transition metals [6]. Upon giving off its proton, each acid forms an anion with two functional groups, carboxylate and pyridine nitrogen which can bind to transition metal cations. Although literature abounds with the structural data on picolinate complexes, the quinaldinate complexes remain relatively rare [6]. Quinaldinate usually binds in a bidentate chelating manner, described as a 1.101 coordination mode in the Harris notation [7]. The quinaldinate is important in chemical engineering and chemical recognition due to its ability to form hydrogen bonds and π∙∙∙π stacking interactions.
As part of our study on copper(II) quinaldinate complexes with various N- and O-donor ligands, we have prepared a heteroleptic neutral complex which contains both the quinaldinate and ethanol ligands. Herein, we report on its synthesis, X-ray structure, infrared vibrational spectrum and thermal analysis results. The quinaldinate to copper(II) ratio used in the synthesis was 1:1. With such a ratio, a rarely observed bridging coordination of quinaldinate was expected. However, regardless of the reaction conditions used, the composition of the only solid isolated from the copper(II)-quinaldinate-ethanol reaction system was [Cu(quin)2(EtOH)2] (1).

2.1. Description of the Crystal Structure

In the title compound, copper(II) is coordinated by two bidentate chelating quinaldinates and two monodentate ethanol molecules. The ORTEP drawing of the complex molecule is shown in Figure 1. The ligands are arranged in trans geometry and the distribution of N2O4 donors describes a distorted octahedron as a result of an operating Jahn−Teller effect [3]. The octahedron is elongated with the ethanol molecules at a relatively large distance, 2.4017(15) Å. Such a bonding pattern is described as the “4 + 2” coordination. Quinaldinate ligands are nearly planar, since the angle between the carboxylate moiety and the quinaldinate bicyclic system is 2.7(3)°. There is a short intramolecular contact between C–H of one quinaldinate ligand and coordinated carboxylate oxygen of the other quinaldinate with a length of 2.985(2) Å. The bond lengths between the copper(II) ion and the quinaldinate in compound 1 are similar to those observed in [Cu(quin)2(MeOH)]∙MeOH [8]. The Cu–N bond lengths are 2.1197(14) Å in 1 and 2.0994(15) and 2.0836(15) Å in [Cu(quin)2(MeOH)]∙MeOH, while the Cu–O bond lengths are 1.9034(12) Å in 1 and 1.9112(12) and 1.9081(12) Å in [Cu(quin)2(MeOH)]∙MeOH [8]. Only one length is given for compound 1 because the asymmetric unit contains one half of the complex molecule. The pair displays markedly different copper–to–alcohol bond lengths: the methanol complex, [Cu(quin)2(MeOH)]∙MeOH, features a much shorter bond of 2.2806(14) Å [8]. Moreover, the Cu–O bond length of 2.4017(15) Å in compound 1 is longer than the average value for bonds between copper(II) ions and O-donor atoms of alcohol molecules [9].
A survey of the Cambridge Structural Database (CSD) [6] revealed that few compounds with the same composition but different transition metal cations are known, namely trans-[Mn(quin)2(EtOH)2] [10], trans-[Fe(quin)2(EtOH)2] [11] and trans-[Co(quin)2(EtOH)2] [12,13]. It should be noted that the isostructural homologues exhibit significantly shorter metal-to-ethanol bonds. Interestingly, the same three metal cations display another type of compounds which also contain quinaldinate and ethanol. Their composition is trans-[M(quin)2(H2O)2]∙2H2O∙2EtOH (M = Mn2+ [14], Fe2+ [15] and Co2+ [16]). In these compounds, water molecules are coordinated instead of two ethanol ligands. The existence of the analogous copper(II) compound is not likely, since the copper(II)-quinaldinate-water system has so far yielded a different complex, [Cu(quin)2(H2O)], which features copper(II) in a five-coordinate environment [17].

The analysis of the crystal structure shows that only one type of hydrogen bond exists, OH∙∙∙COO−. The hydroxide groups of the ethanol molecules act as hydrogen bond donors, while the non-coordinated oxygen atoms of the quinaldinate carboxylate moiety act as acceptors. Hydrogen bonds of 2.7644(19) Å therefore linked the molecules into infinite chains which propagated along the a-axis (Figure 2). Each molecule formed four such interactions with two adjacent molecules. The hydrogen bonding pattern can be described as in graph set notation [18]. The packing revealed that each chain was surrounded by six other chains (Figure 3), but no significant π∙∙∙π stacking interactions could be observed between the quinaldinate rings [19]. The shortest Cu∙∙∙Cu contact within the chain was 5.9782(2) Å.

Compound 1 decomposed in two endothermic stages over the temperature range 20–500 °C. Upon heating, mass loss began above 80 °C and continued up to 120 °C, where the mass stabilized. In the first decomposition step, the loss amounted to 17.80% of the initial value. The experimental value roughly agrees with the calculated one for the release of two ethanol molecules per formula unit, 18.43%. The residue {Cu(quin)2} displayed a region of stability up to 260 °C, when the second major degradation process set in. By 500 °C, the mass was reduced by almost 60%. Upon further heating to about 600 °C, a slight increase in the mass of the solid residue was observed. From then on to 800 °C, a continuous decrease in mass was observed. Both the thermogravimetric (TG) and differential scanning calorimetry (DSC) curves are shown in Figure 4, while the TG-MS diagram can be found in the Supplementary Materials, Figure S2. The TG-MS diagram confirms the loss of ethanol in the first decomposition step [21].

All reagents were purchased from commercial sources and used without further purification. IR spectrum was recorded on a FTIR instrument PerkinElmer Spectrum 100 (PerkinElmer, Shelton, CT, USA) between 4000 and 600 cm−1 with ATR module. Due to the instability of compound 1, elemental CHN analysis could not be performed. For the same reason, no magnetic measurements were performed. TG analysis was carried out on a Mettler Toledo TG/DSC 1 instrument (Mettler Toledo, Schwerzenbach, Switzerland). A small amount of crystals of trans-[Cu(quin)2(EtOH)2] was carefully removed from the mother liquor, placed on a filter paper for a few seconds, and then placed in a platinum crucible. The sample was heated from 20 to 800 °C at a heating rate of 10 °C min−1. The furnace was purged with argon at a flow rate of 50 mL min−1. The baseline was subtracted. The evolved gases were analyzed using a Pfeiffer Vacuum ThermoStar mass spectrometer (MS) (Pfeiffer Vacuum ThermoStar, Asslar, Germany). Single crystal X-ray diffraction data were obtained on an Agilent SuperNova diffractometer (Agilent Technologies XRD Products, Oxfordshire, UK) with molybdenum (Mo-Kα, λ = 0.71073 Å) X-ray source at 150 K. CrysAlis PRO [22] was used for data processing and Olex2 software [23] for data analysis. Intrinsic phasing in ShelXT [24] was used for structure solution and least squares method in ShelXL [25] for structure refinement. Anisotropic displacement parameters were determined for all nonhydrogen atoms. OH hydrogen atoms of the ethanol molecules were obtained from a difference Fourier map and refined with isotropic displacement parameters. The remaining hydrogen atoms were placed in geometrically calculated positions and refined with riding models. The ethanol was disordered over two positions and the disorder was successfully modeled using the PART instruction. One conformation was refined with 0.72 occupancy and the other with 0.28. Crystal structure analysis and preparation of figures was carried out with programs Platon [26] and Mercury [27]. The crystal structure was deposited to the CCDC and assigned the deposition number 2082226. These data can be obtained free of charge via http://www.ccdc.cam.ac.uk/conts/retrieving.html (accessed on 27 May 2021) (or from the CCDC, 12 Union Road, Cambridge CB2 1EZ, UK; Fax: +44 1223 336033; E-mail: [email protected]). The crystallographic data are summarized in Table 1.

Conceptualization, B.M. and N.P.; checking the reproducibility of synthesis, J.Č.; writing, review and editing, B.M. and N.P. All authors have read and agreed to the published version of the manuscript.

This research was funded by the Slovenian Research Agency (Junior Researcher Grant for N.P. and the Program Grant P1-0134).

Crystal structure data can be found at CCDC (deposition number 2082226).

The authors would like to thank Romana Cerc Korošec for performing thermal analysis. 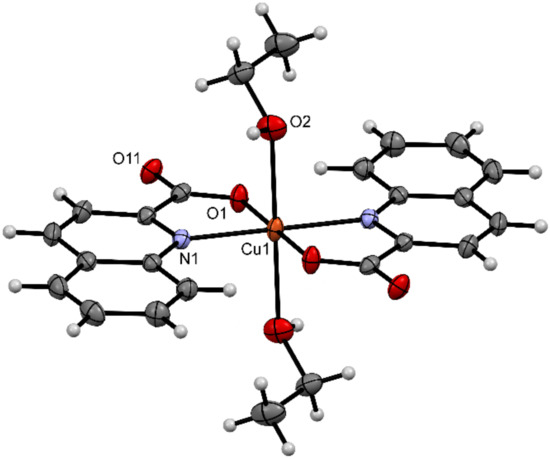 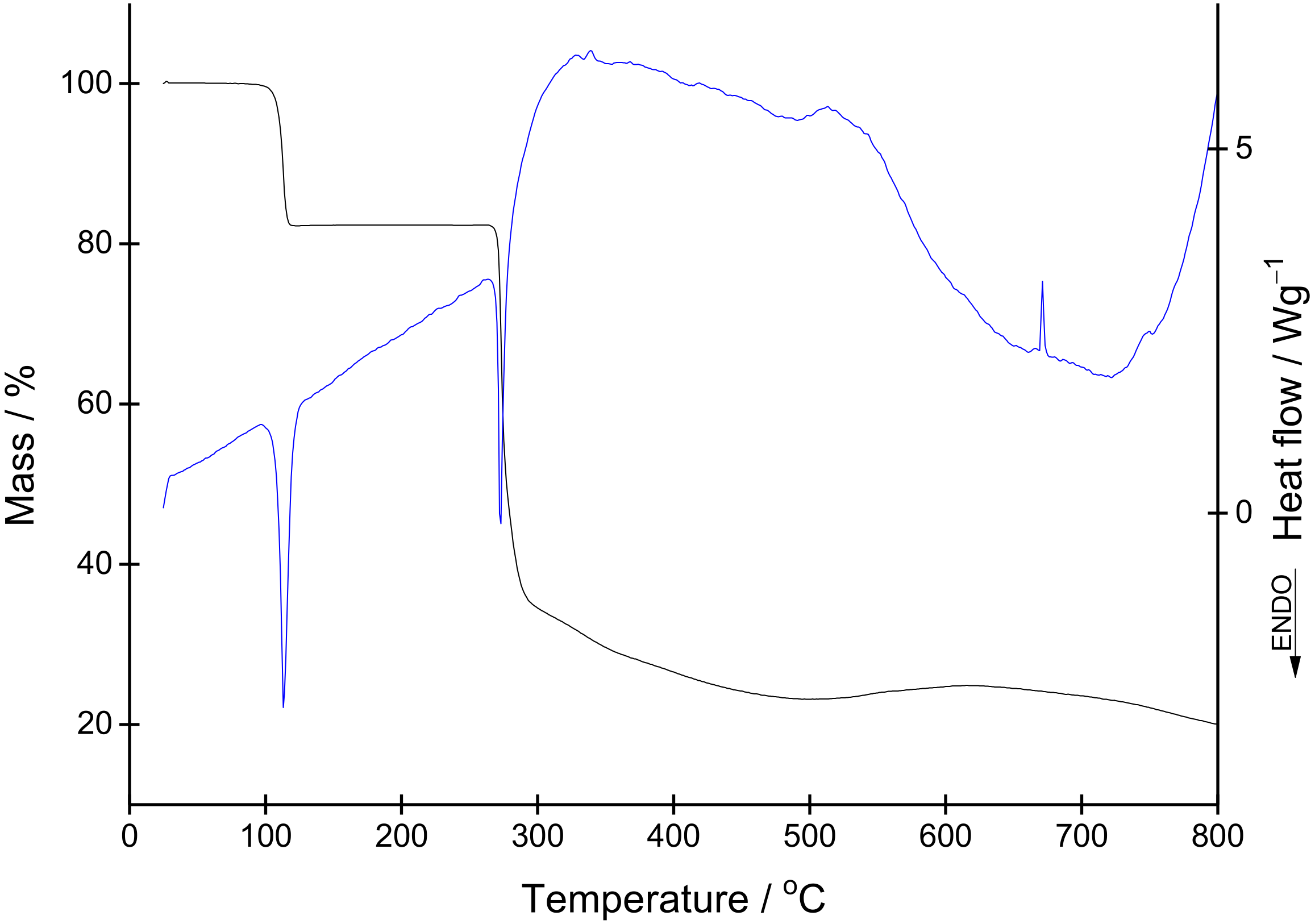 Table 1. Crystallographic data for trans-[Cu(quin)2(EtOH)2] (1).
Table 1. Crystallographic data for trans-[Cu(quin)2(EtOH)2] (1).
© 2021 by the authors. Licensee MDPI, Basel, Switzerland. This article is an open access article distributed under the terms and conditions of the Creative Commons Attribution (CC BY) license (https://creativecommons.org/licenses/by/4.0/).
We use cookies on our website to ensure you get the best experience. Read more about our cookies here.
Accept
We have just recently launched a new version of our website. Help us to further improve by taking part in this short 5 minute survey here. here.
Never show this again