Aziridines are recurrent motifs in anticancer compounds (Figure 1A) and are useful building blocks in organic synthesis, largely due to their ring strain [1].
In 1972, Kaplan and co-workers implemented an innovative methodology to prepare 6-azabicyclo[3.1.0]hex-3-en-2-ol (bicyclic vinyl aziridines) via the photochemical conversion of pyridinium salts (Scheme 1) [5]. Bicyclic vinyl aziridines are useful intermediates to access aminocyclopentitols, a family of natural compounds known for being glycosidase inhibitors (Figure 1B) [6,7]. The synthetic methodology to prepare aminocyclopentitols involves the synthesis of bicyclic vinyl aziridines, followed by a ring-opening reaction to originate an aminocyclopentene, which after further functionalization originate the desired aminocyclopentitol. This methodology was developed by Mariano [8] and applied to the synthesis of several aminocyclopentitols, such as (+)-mannostatin A [9], (+)-castanospermine [10], and (-)-swainsonine [11] (Scheme 1).
Mannostatin A is a natural product, first isolated from a soil microorganism Streptoverticillus, and is among the most potent inhibitors of class II α-mannosidase. The chemical structure of Mannostatin A contains a thiol functionality, responsible for the high affinity to the enzyme’s binding site [12]. Inhibitors of glycosidases are leading the drug discovery across cancer, and viral and bacterial infections. Mannostatin A and its analogs [13] have been used to study the inhibition of glycosidases to orientate the development of drug candidates [6,7].
Our group studied the photochemical reactions of pyridinium salts to bicyclic vinyl aziridines under continuous-flow [14,15]. The implementation of flow enabled the synthesis of bicyclic vinyl aziridines with larger productivity when compared to reported batch methods [16] and also the achievement of a gram scale production [15] (Scheme 2A).
We also studied several bicyclic vinyl aziridines transformations. In collaboration with G. Poli, we reported a palladium-catalyzed allylic substitutions using C-nucleophiles [18] (Scheme 2B). Additionally, we accomplished several ring-opening reactions using sulfur and nitrogen-based nucleophiles in an aqueous medium, including a bioconjugation with the peptide hormone salmon calcitonin (sCT) [17] (Scheme 2C). Within the reactions performed, the best yields were achieved for thiol-nucleophiles. In line with this work, we herein present the ring-opening reaction of 6-(3-hydroxypropyl)-6-azabicyclo[3.1.0]hex-3-en-2-ol by a thiol-based nucleophile, 1-methyl-1H-tetrazole-5-thiol (Scheme 2D).

The starting material, 1-(3-hydroxypropyl)pyridin-1-ium chloride (1c), was prepared from pyridine and 3-chloropronanol following our reported method. 6-(3-hydroxypropyl)-6-azabicyclo[3.1.0]hex-3-en-2-ol (2c) was obtained by photohydration of the pyridinium salt 1c (Scheme 3), also taking advantage of our previous reported synthetic methodology [18]. In this work, the bicyclic vinyl aziridine 2c was subjected to thiol-nucleophilic attack by 1-methyl-1H-tetrazole-5-thiol, applying our reported optimized conditions [17]. An excess of the nucleophile (3 equivalents) was used under mild reaction conditions (37 °C, in water), and we obtained the product 3c as a brown oil, in excellent yield (95%) after purification by silica gel chromatography (Scheme 3). The ring-opening reaction occurs via the SN2 pathway in a regio- and stereospecific manner, and the nucleophile attacks in the less sterically hindered carbon of the aziridine moiety, as previously reported by Mariano [19] and Burger [20], and more recently also by us [17].
The product 3c was characterized by 1H-NMR, 13C-NMR, HSQC, and HRMS. By analyzing the 1H-NMR spectrum (Figure S1), we can observe characteristic peaks from product 3c: a singlet at 3.96 ppm, corresponding to the methyl group linked to the tetrazole ring (H-18), and multiplets corresponding to the geminal protons of the thioether at 4.30–4.29 ppm (H-4), the alcohol at 4.59–4.58 ppm (H-1), and the amine at 3.29–3.26 ppm (H-5). The signals for the hydroxypropyl chain can be observed as a quartet (J = 6.9 Hz, 2.77 ppm), a multiplet (1.76–1.67 ppm), and a triplet (J = 6.4 Hz, 3.60 ppm), corresponding to the protons vicinal to the amine (H-7), to the middle-chain methylene (H-8), and to the protons geminal to the hydroxyl group (H-9), respectively. Additionally, the 13C-NMR (Figure S2) shows the characteristic peaks from the tetrazole ring: a quaternary carbon at 153.32 ppm (C-13), which does not correlate with a proton signal in the HSQC (Figure S3), and the carbon from the methyl group at 33.87 ppm (C-18).
The product 3c can be further functionalized, since it has a primary and a secondary hydroxyl group. Moreover, 3c has a tetrazole ring which could lead to potential biological activity, since the tetrazole moiety can be found in different approved [21] and candidate drugs [22,23]. Accomplishing the synthesis of 3c contributed to expanding our previous aminocyclopentitols library [17].

This research was funded by Fundação para a Ciência e a Tecnologia (FCT) (reference number: PTDC/QUI-QOR/32008/2017). The project leading to this application received funding from the European Union’s Horizon 2020 research and innovation program under grant agreement No. 951996. 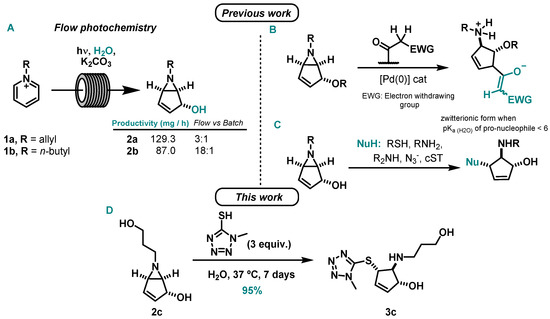 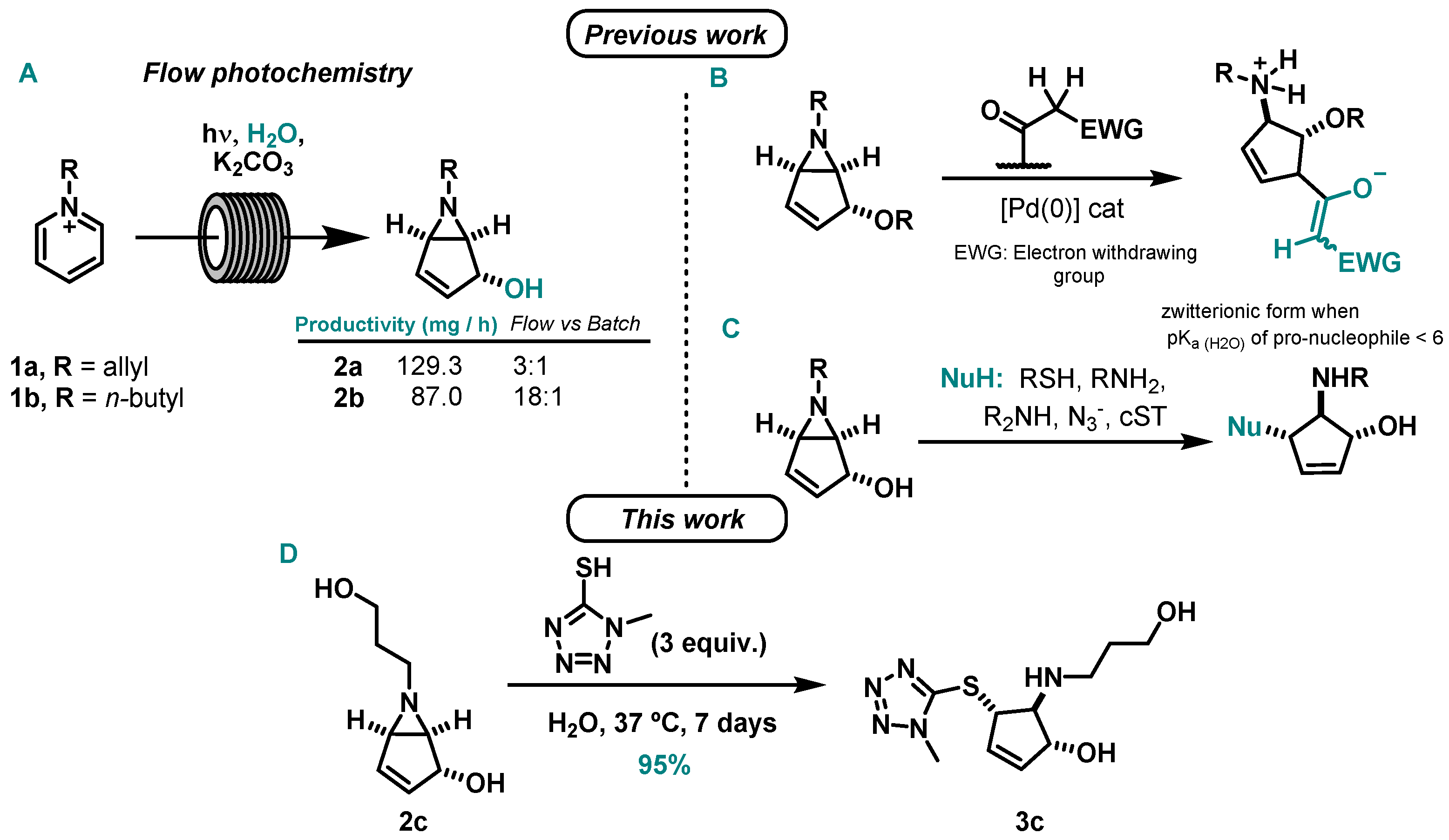