In order to synthesize amides bearing 1-aminoanthraquinone, the corresponding acid chloride were treated with the amine. The synthesis of the title compound, N-(9,10-dioxo-9,10-dihydroanthracen-1-yl)-2-methylbenzamide (7), was achieved by reacting o-toluoyl chloride (2-methylbenzoyl chloride) (8, Scheme 2) with 1-aminoanthraquinone (3, Scheme 2) under standard amide formation reaction conditions to afford the corresponding target benzamide (7) in 94% yield.
For comparison purposes, the synthesis of the target compound (7) was carried out by coupling the corresponding, relatively cheaper carboxylic acid with 1-aminoanthraquinone. Thus a mixture of 2-methylbenzoic acid (9, Scheme 3) and 1-aminoanthraquinone (3) was treated with the coupling agent; DCC (dicyclohexylcarbodiimide) in the presence of DMAP (4-N,N-dimethylaminopyridine) to give the desired title compound, N-(9,10-dioxo-9,10-dihydroanthracen-1-yl)-2-methylbenzamide (7), in 24% yield.
Consequently, the synthesis of the target amide is better achieved using the acid chloride method illustrated above (Scheme 2). The amide product was characterized by various spectroscopic methods; 1H-NMR, 13C-NMR, IR and GC-MS analysis.

In our continuing program of the design of directing groups suitable for metal-catalyzed C-H bond functionalization reactions, a synthesis of a design-based amide, bearing N,O-directing group bearing the commercially cheap 1-aminoanthraquinone is reported. Thus, the target title compound, N-(9,10-dioxo-9,10-dihydroanthracen-1-yl)-2-methylbenzamide, was synthesized in 94% yield from 2-methylbenzoyl chloride and 1-aminoanthraquinone. The compound was characterized by various spectroscopic methods (1H-NMR, 13C-NMR, IR, and GC-MS analysis. With bearing 1-aminoanthraquinone in hand, work is currently underway to investigate their N,O-bidentate directing group-potential in metal-catalyzed C-H bond functionalization reactions.

A.A.S. carried out all experimental work under the supervision of H.H.A.M. All authors have read and agreed to the published version of the manuscript.

The support of Sultan Qaboos University is gratefully acknowledged. 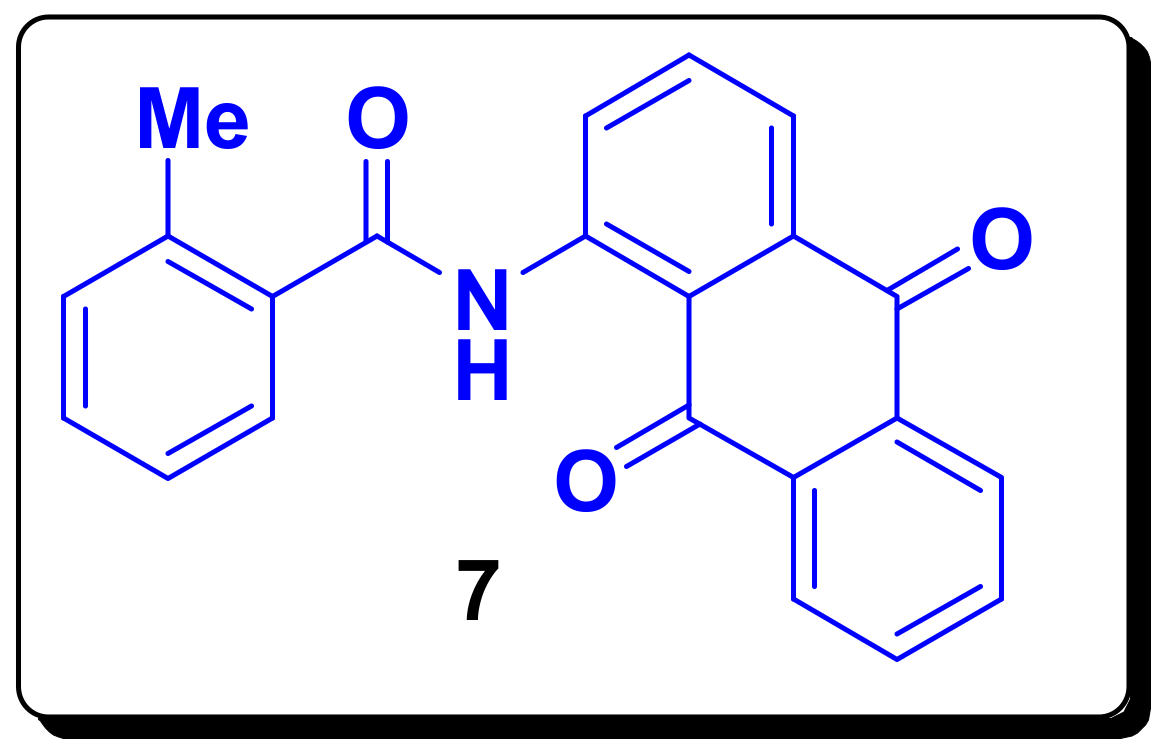