The formation of 2,4,6-trimethylbenzyl chloride 1 by chloromethylation of mesitylene was first mentioned by Sommelet in 1913 [1], although no data were given for the product. Subsequent reports [2,3,4,5] described the stepwise development of this into a reliable synthetic procedure [6], with the product characterised by melting point and boiling point values. The compound has also been characterised by infrared [7], 1H and 13C nuclear magnetic resonance [8], and nuclear quadrupole resonance [9] spectroscopy, as well as mass spectrometry [10]. However, as far as we are aware, its solid-state structure has not been examined, perhaps as a result of its waxy nature and low melting point of 37 °C. We report here the crystal and molecular structure of 1 as determined by single crystal X-ray diffraction and compare the result with those of similar benzylic chlorides that have been previously reported.

Crystals suitable for diffraction were obtained from the inner surface of a commercial bottle (Lancaster Synthesis) that had been stored for >20 years, allowing slow sublimation. The resulting structure (Figure 1) shows two chemically equivalent but crystallographically independent molecules per asymmetric unit. As expected, there are no significant intermolecular interactions, and the shape of each molecule is determined largely by steric factors and, in particular, the presence of the 2,6-dimethyl substituents, which forces the CH2Cl group to take up an orientation with C-Cl almost perpendicular to the plane of the benzene ring. The key geometric parameters for 1 are compared with those for a range of other crystallographically characterised benzyl chlorides (Figure 2) taken from the Cambridge Structural Database (CSD) and shown in in Table 1. These included benzyl chloride itself 2, which is a liquid at room temperature but whose structure was determined at 150 K, and seven further crystalline compounds containing a benzene ring and only CH2Cl, Me, or Cl groups: the three isomeric bis(chloromethyl)benzenes or α,α′-dichloroxylenes 3–5, 1,3,5-tris(chloromethyl)benzene or α,α′,α″-trichloromesitylene 6, and the hexasubstituted benzene derivatives 7–9. The parameters examined are the length of the ring to CH2 bond, the length of the CH2 to Cl bond, the ring C to CH2 to Cl angle, and finally the torsion angle between the plane of the benzene ring and the CH2 to Cl bond.
Of the compounds examined, the molecules of 3, 5, 8, and 9 lie on special positions that impose crystallographic symmetry on the molecule, thus exhibiting only one independent set of parameters for CH2Cl, while the molecules of 4, 6, and 7 have all CH2Cl groups with independent geometries; in addition 6, similar to 1, shows two independent molecules per asymmetric unit, thus giving rise to six sets of values.
While the length of the C-CH2 bond does not vary significantly between any of the compounds, the same cannot be said for CH2-Cl, where the values measured for the two molecules in our structure are significantly longer than most of the previously reported values. The value of the C-CH2-Cl angle also turns out to vary relatively little between the compounds, and although the first listed molecule of 1 has a high value of 112.3°, the difference from the normal range of 110–111.5° is small. It is perhaps surprising to observe that the torsion angle between the plane of the aromatic ring and the C-Cl bond is generally between 78° and 89° regardless of the position and nature of substituents present. Apart from a slightly lower value for two such bonds in one molecule of 6, all the other values are in this range indicating that even in the absence of ortho substituents as in compound 1, the favoured orientation in a benzyl chloride is to have the C-Cl bond essentially perpendicular to the plane of the benzene ring.
In summary, we obtained the X-ray crystal structure of 2,4,6-trimethylbenzyl chloride for the first time and found it to have two independent molecules per asymmetric unit both with a C-Cl bond length of 1.83 Å, which is slightly longer than for a range of comparable benzyl chloride structures previously reported.

A.M.Z.S. collected the X-ray data and solved the structure; R.A.A. designed the experiments, analysed the data, and wrote the paper. All authors have read and agreed to the published version of the manuscript. 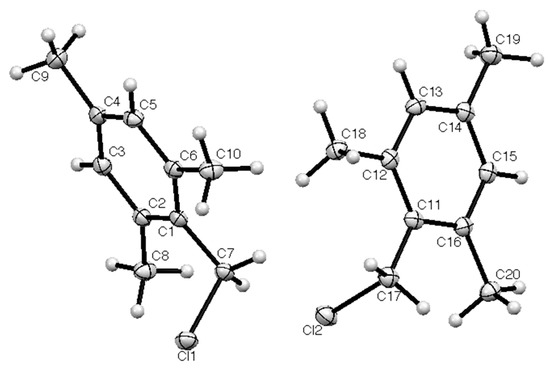 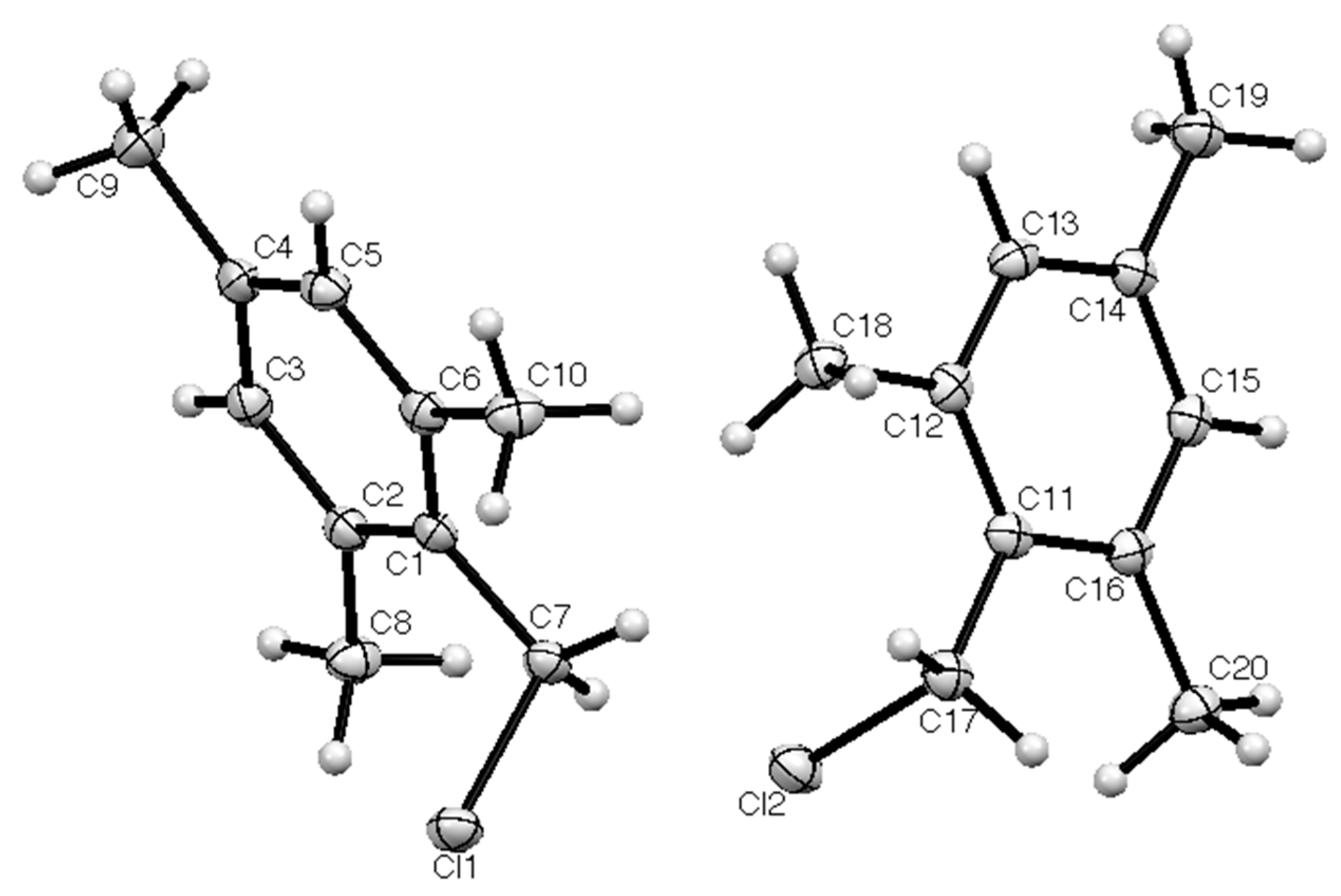 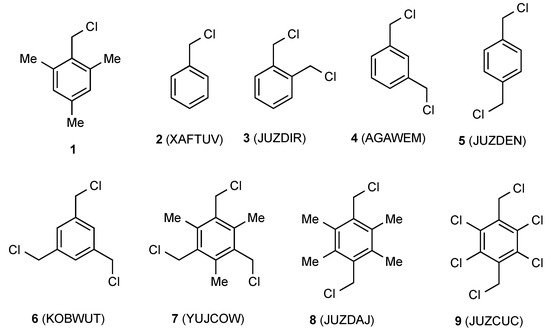 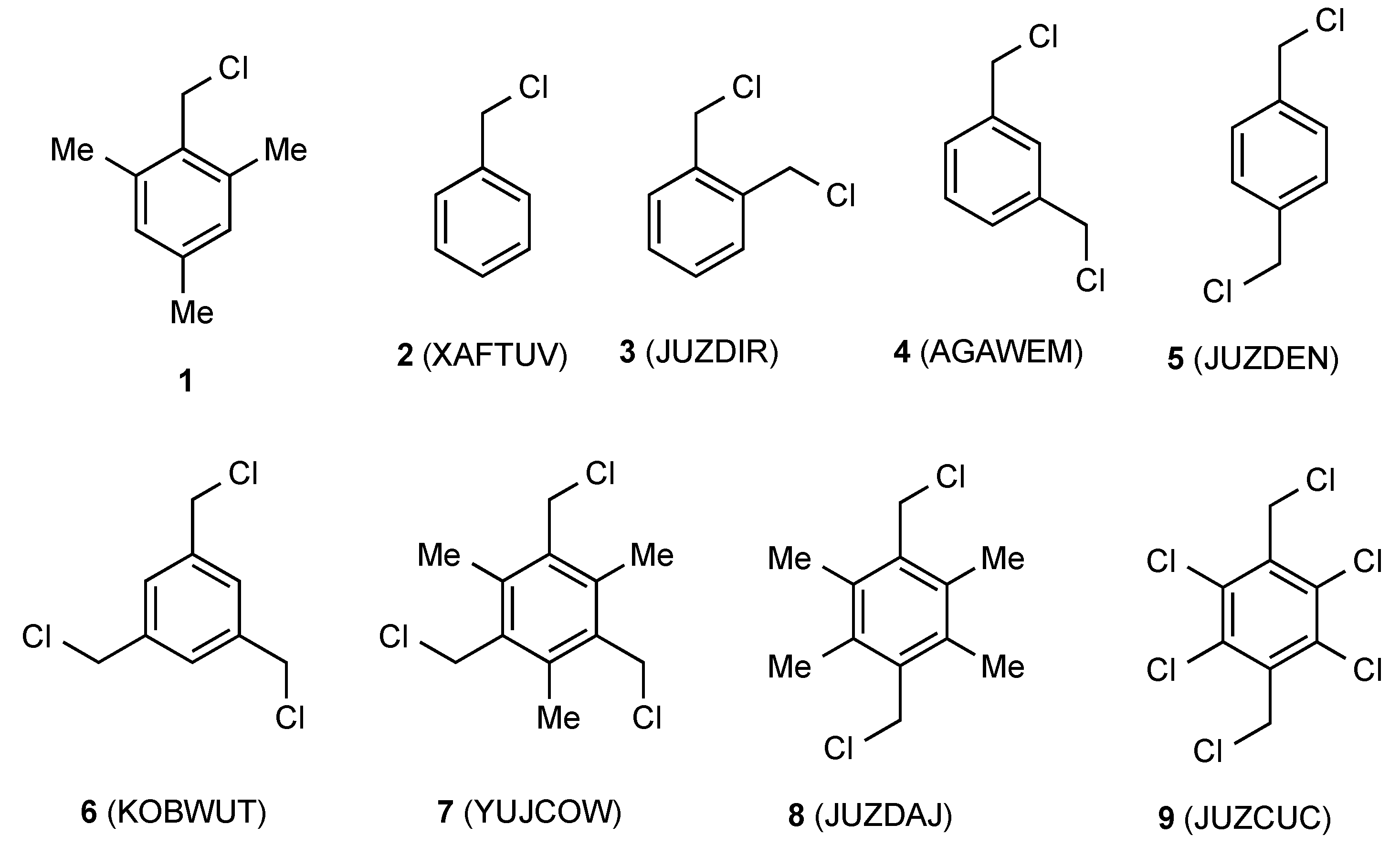 Table 1. Key geometric parameters for crystallographically characterised benzyl chlorides.
Table 1. Key geometric parameters for crystallographically characterised benzyl chlorides.
* Values for second molecule in the asymmetric unit.
© 2020 by the authors. Licensee MDPI, Basel, Switzerland. This article is an open access article distributed under the terms and conditions of the Creative Commons Attribution (CC BY) license (http://creativecommons.org/licenses/by/4.0/).
We use cookies on our website to ensure you get the best experience. Read more about our cookies here.
Accept
We have just recently launched a new version of our website. Help us to further improve by taking part in this short 5 minute survey here. here.
Never show this again