:
Bicyclo[4.2.0]octa-1,3,5-trien-3-yl-dimethyl-((E)-styryl)-silane was synthesized via three stage synthesis starting from benzocyclobutene and (2-bromo-vinyl)-benzene. The structure of the product was determined using 1H- and 13C-NMR and HRMS.
Keywords:
benzocyclobutene; Grignard reaction; bicyclo[4.2.0]octa-1,3,5-trien-3-yl-dimethyl-((E)-styryl)-silane; (2-bromo-vinyl)-benzene

Silicon organic compounds are widely used as intermediates in various syntheses and as target substances in industrial chemistry. Polysiloxanes and polysilanes are known as coupling agents for enhanced adhesion [1,2]. They increase mechanical and dielectric properties of composites [3], improve dispersion of pigments and industrial minerals, provide crosslinking, immobilize catalysts, and bind biomaterials [4].
Many companies are developing silane- and siloxane-based photo or thermo curable materials for electronics. For example, Polyset company (https://www.polyset.com) created a family of novel siloxane-based monomers and oligomers that are especially attractive for such applications as microelectronics, photonics, composites, coatings, and adhesives. These novel materials bear reactive functional groups consisting of cyclohexyl epoxy, glycidyl ether, vinyl ether, and acrylate moieties as well as combinations of these group. Dow chemicals (www.dow.com) presents a line of composite materials (CYCLOTENE™) with divinylsiloxane (DVS) and benzocyclobutene (BCB) based component as photoresists and thermosets (Divinyl siloxane bis-benzocyclobutene, DVS-BCB). In recent years, many new articles have appeared devoted to the development of hybrid silanes or siloxanes and BCB containing monomers [5,6,7,8,9,10]. The polymerization of these compounds occurs due to the presence of acrylate, silocyclobutene groups, alkenes (including vinyl, styryl, and allyl groups), etc. Crosslinking of the polymers provides a benzocyclobutene fragment capable of thermal opening (t > 200 °C) with the formation of active o-xylylenes. Several polymerization mechanisms are known: Interactions of o-xylylenes with active alkenes ([4+2] cycloaddition, (Scheme 1A)) or by itself with the formation of a polydiphenylethylene or cyclooctane structures [11]. Photocurable DVS-BCB composites include [12] photoactive bisazide compounds that are capable of forming aziridines (Scheme 1B) under UV-irradiation. BCB crosslinked polymers have high values of glass transition temperatures and thermal stability [5,6,13].
In this short note we present a synthesis of a new bicyclo[4.2.0]octa-1,3,5-trien-3-yl-dimethyl-((E)-styryl)-silane (BCB-KS) that include benzocyclobuten-3-yl and vinylbenzene moieties. It may be of interest in the creation of photo and thermopolymerizable composites and used in synthetic processes as an intermediate compound.

Synthesis of the title compound is presented on Scheme 2 and include a three stage process from (2-bromovinyl)benzene and benzocyclobutene. In the first step, (2-bromovinyl)benzene was added to mixture of dichlorodimethylsilane and magnesium in tetrahydrofuran (THF) at 25–30 °C. The resulting dimethylchloro((E)-styryl)silane was purified by vacuum distillation. The byproducts in this reaction are 1,4-diphenylbutadiene and styrene.
Dimethylchloro((E)-styryl)silane can also be obtained from phenylacetylene and dimethylchlorosilane [14,15]. Upon receipt in this way, the target product is contaminated with dimethylchloro(1-phenylvinyl)silane.
Dimethylchloro((E)-styryl)silane reacts with benzocyclobuten-3-yl magnesium bromide to produce the desired benzocyclobuten-3-yl-dimethyl((E)-styryl)silane (BCB-KS) as colorless fusible solid with 65.6% yield.
All compounds were characterized by 1H, 13C NMR, and HRMS analysis. NMR data of known compounds were compared with previously published data [16,17,18]. These NMR, HRMS and FTIR data of compounds can be found in the Supplementary Materials.
Signals of the carbon atoms of the –CH2–CH2– of the compound 7 (BCB-KS) cyclobutene ring were found in the 13C NMR spectra at 29.83 and 29.95 ppm, hydrogen atoms were detected as slightly broadened singlet at 3.21 ppm. Double bond of 7 gives two signals in 1H NMR spectra at 7.07 and 6.71 ppm with high value of J-constants (19.1 Hz), which confirms its trans orientation. Two CH3 groups of –Si(CH3)2 are detected in 1H NMR and 13C NMR spectra at 0.52 (s) and −2.26, respectively. Aromatic hydrogens were indicated at 7.11–7.50 ppm. In 13C NMR spectrum there were found high-intensity signals at 126.50 and 128.52 ppm related to pairs of symmetric carbons of the phenyl group. Six signals (145.06, 132.25, 128.10, 127.72, 127.59, and 122.01) of tertiary carbon atoms and four signals of quaternary carbon atoms (147.22, 145.63, 138.25, and 136.59) were found.

NMR spectra were registered using a Bruker AM-300 or a Bruker Avance 600 spectrometer (Bruker Corporation, Billerica, MA, USA) in CDCl3. Mass spectra were obtained on a Varian MAT CH-6 instrument (Varian, Inc, Palo Alto, CA, USA) using a direct inlet system; the ionization energy was 70 eV; the acceleration voltage was 1.75 kV. The reaction mixtures were analyzed and the purity of all products was checked by TLC on Merck Silica gel 60 F254 UV-254 plates. Dimethyldichlorosilane was purchased from abcr GmbH, Karlsruhe, Germany. Magnesium powder was purchased from Sigma-Aldrich, Co., USA. Bromine, solvents were purchase from «Base No. 1 «Chimreactivov», Staraya Kupavna, Russia. Other of the reagents were produced from JSC «Technomash, Russia.

New benzocyclobuten-3-yldimethyl((E)-styryl)silane (BCB-KS) was obtained via three stage synthesis starting from benzocyclobutene and (2-bromovinyl)benzene with good yields. Obtained product can be useful for development of new polymerizable composite materials with good thermal stability and dielectric properties or used in synthetic processes as an intermediate.

Supplementary data to this article can be found online. These data include MOL file, 1H, 13C NMR, HRMS, FTIR data of the title compound.

Synthesis, K.S.L. and K.A.C.; NMR data analysis, D.Y.D. and P.S.S.; Writing—original draft preparation, K.S.L.; Writing—review and editing, K.S.L. and P.S.S.; Supervision and project administration, E.P.G. All authors have read and agreed to the published version of the manuscript. 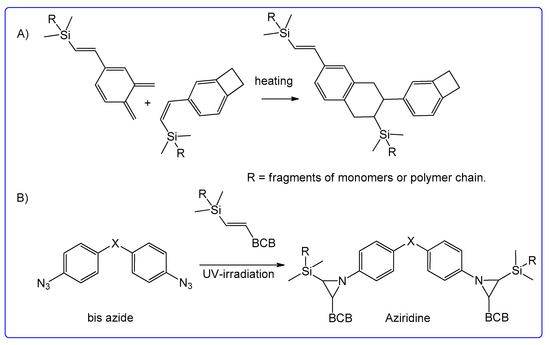 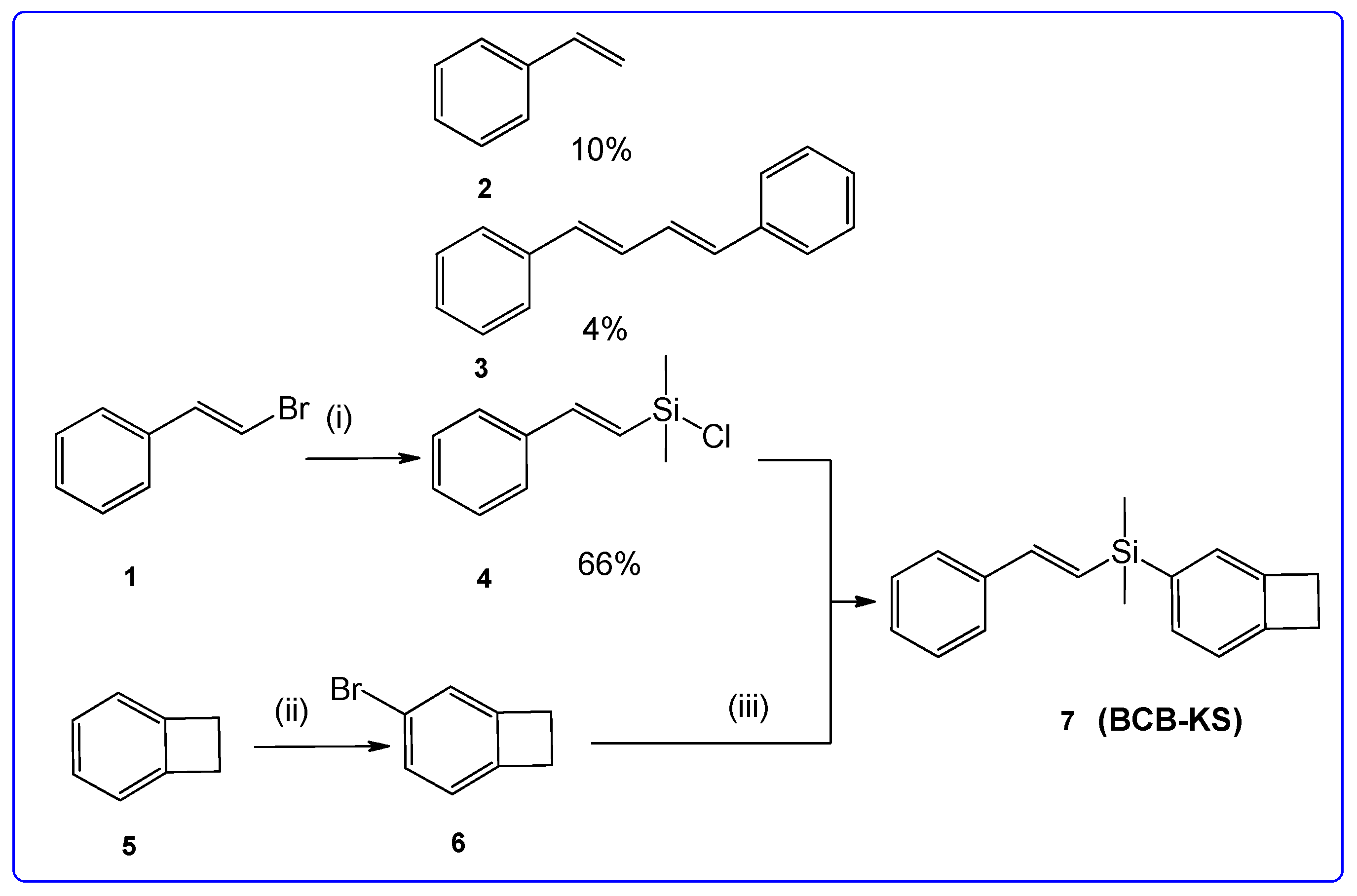