:
A novel compound involved in the aroma of the fruit Campomanesia lineatifolia was isolated; the structure was determined by spectroscopic methods, mainly 1D and 2D NMR.
Keywords:
champanone; chalcone; structure; biogenetic analysis

Champanones A, B and C are compounds isolated from the fruit of Campomanesia lineatifolia R. & P. (Myrtaceae) [1,2]. These compounds are characterized by the presence of several methyl groups in the A ring of a flavonoid or chalcone. Here, we report the structure of the new champanone D on the basis of NMR, mainly HMBC experiment; in addition, the substitution pattern can explain the biosynthesis of the other compounds.

Champanone D, 2 was isolated as a yellow powder and its structure was assigned as follows. NMR spectra displayed the presence of three methyl groups due to the singlets at δ 1.43, 1.46 and 1.89 (3H each one); in addition, a dt (2H) was detected at δ 3.02 for a methylene group methylene, and a d (J = 5.1 Hz) at δ 5.36 (1H). Finally, two more singlets were observed at δ 7.47 (5H, phenyl group) and at δ 13.84 (chelated hydroxyl group). COSY 1H-1H indicates a coupling between methylene at δ 3.02 with the singlet at δ 5.36; both signals correspond to a methylene and a methine group according to HMQC experiment.
Additionally 13C JMOD experiment revealed the presence of three methyl groups at δ 7.94, 23.11 and 25.53, which according to HMQC experiment correlates with methyl groups located at δ 1.89, 1.46 and 1.43, respectively, then, the last two signals were assigned to gem-dimethyl group. Other detectable signals were a methylene group at δ 38.26, and three methine carbon atoms at δ 76.12, 125.85 and 128.97 coupling to the intense singlet at δ 7.47 in 1H-NMR. Also six quaternary carbon atoms were displayed in 13C JMOD at δ 52.40, 101.48, 107.35, 138.13, 161.32 and 182.91, as well as two carbonyl signals at δ 201.79 and 198.11. The existence of an oxygenated methine at δ 76.12 indicates the presence of an alcohol. A formula C18H20O5 can be assigned to compound 2 based on these data.
When the spectroscopic properties of compound 2 were compared to those reported for other compounds isolated from Campomanesia lineatifolia, a high similarity was appreciated specifically with champanone B, since both possess three methyl groups (including a gem-dimethyl group), two carbonyl groups and a side phenyl ring (Figure 1).
Nevertheless, the possibility that both compound have the same structure was excluded since 1H and 13C-NMR of champanone B were significantly dissimilar to those obtained in this work; in addition, HMBC experiment showed several anomalies. Thus, a carbonyl group at δ 198.11 ppm displayed long-range correlation with the methyl group and the gem-dimethyl group. However, the other carbonyl group at δ 201.79 only coupled to gem-dimethyl, which means coupling correlations involving five bonds (Figure 2, left). To meet all requirements of an HMB experiment, the new compound 2 should have several positions interchanged in relation to champanone B. If methyl and carbonyl groups were relocated as displayed in Figure 2 (right), all observed J3 and J2 long-range correlations would be correct.
Aside from champanone D, champanone C, whose chemical shifts are shown in Table 1, was also isolated.
The structure of champanone D could explain the biosynthesis of several types of compounds, since retro-enolization of the C-5 carbonyl group leads to two type of molecules. One of them with a gem-dimethyl at C-4 or free rotation around C-4, C-5 bond produces a molecule with a C-2-gem-dimethyl group, alike champanone C (Figure 3).
Phloroglucinol derivatives have mainly been reported in the species of the Myrtaceae and Hypericaceae families [3,4] and exhibit several biological activities including degenerative diseases and antibiotics, especially antivirus [5]. 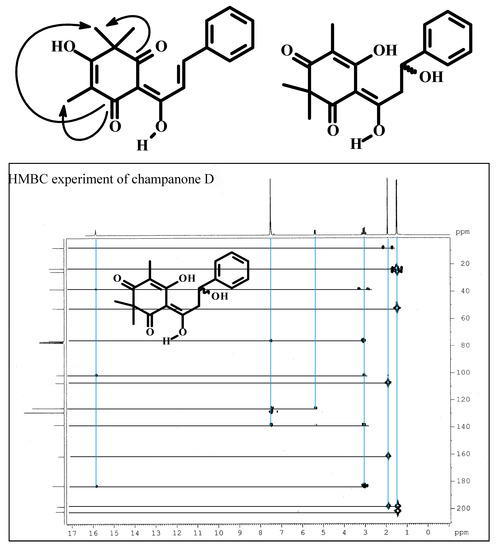