Mercury is a non-essential element that exhibits a high degree of toxicity to humans and animals. Exposure to mercury has been associated with a significant number of adverse health effects including: cardiovascular disease, anemia, developmental abnormalities, neurobehavioral disorders, kidney and liver damage, and cancer in some cases. In several studies, the toxicity of mercury has been attributed to its high affinity to protein-containing sulfhydryl groups. However, little is known regarding the molecular mechanisms by which mercury exerts its toxicity, mutagenesis, and carcinogenesis. This research was therefore designed to assess the cellular and molecular responses of human liver carcinoma cells following exposure to mercury. Cytotoxicity was evaluated using the MTT-assay for cell viability, while the gene profile assay was performed to measure the transcriptional activation of stress genes in thirteen different recombinant cell lines generated from HepG2 cells. Cytotoxicity experiment yielded a LD50 value of 3.5 ± 0.6 μg/mL upon 48 hours of exposure, indicating that mercury is highly toxic. A dose response relationship was recorded with respect to both cytotoxicity and gene induction. Overall, nine out of the thirteen recombinant cell lines tested showed inductions to statistically significant levels (p < 0.05). At 2.5 μg/mL of mercury, the average fold inductions were 5.2 ± 0.9, 21.4 ± 3.9, 7.0 ± 6.2, 6.8 ± 1.1, 2.7 ± 1.0, 4.5 ± 2.0, 7.5 ± 6.0, 2.2 ± 0.7, and 2.5 ± 0.3, for GSTYa, HMTIIA, c-fos, HSP70, CRE, p53RE, GADD153, GADD45, and GRP78, respectively. These results indicate the potential of mercury to undergo Phase II biotransformation in the liver (GSTYa), and to cause protein damage (HMTIIA, HSP70, and GRP78), cell proliferation (c-fos), metabolic perturbation (CRE), growth arrest and DNA damage (GADD153, GADD45), and apoptosis (p53RE). No significant inductions (p > 0.05) were observed for CYP1A1, XRE, NFkBRE, and RARE. View Full-Text
Keywords: Mercury; cytotoxicity; gene expression; HepG2 cells Mercury; cytotoxicity; gene expression; HepG2 cells
►▼ Show Figures 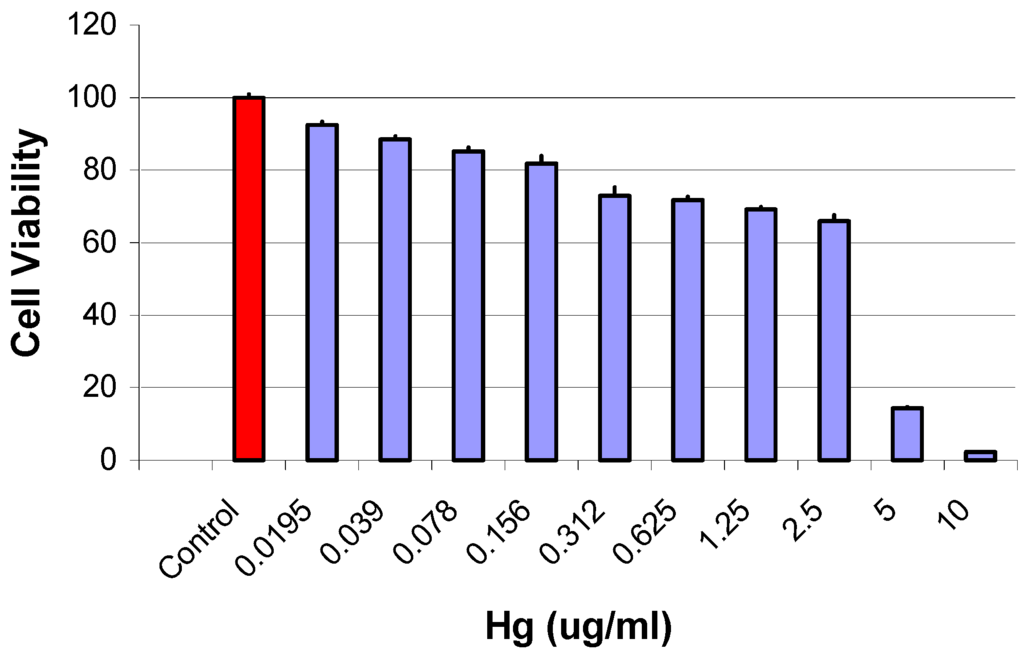