COVID-19 in Joint Ageing and Osteoarthritis: Current Status and Perspectives

Osteoarthritis (OA) is the most common musculoskeletal degenerative disease and a major cause of pain and disability in the elderly [1,2,3,4]. The main risk factors for OA include age, obesity, and joint injury [5]. OA is a whole joint disease, characterized by the irreversible degradation of cartilage, the pathological remodeling of the subchondral bone, including sclerosis and osteophytosis as well as to moderate inflammation of the synovium [2,6,7]. The remodeling of the osteochondral junction is thought to play a determinant role in OA and is reminiscent of the endochondral ossification process. It involves the hypertrophic differentiation of chondrocytes of the deepest layer of the hyaline articular cartilage followed by the mineralization and the vascularization of the cartilage matrix and the replacement of cartilage by bone, leading to sclerosis of the subchondral bone plate [8,9,10]. This complex process requires strong functional interactions between chondrocytes and bone cells. However, mechanisms and biochemical mediators governing the remodeling of the osteochondral junction in OA remain poorly characterized.
Mechanical loading is determinant for maintaining the integrity of bone, skeletal mass, and architecture. It is well established that mechanical loading enhances bone formation and favors cartilage homeostasis, whereas unloading leads to bone loss and cartilage degradation [11,12,13,14,15,16]. However, inappropriate mechanical loading, as occurs with an excessive body weight, weakness of muscles related to aging or instability after a ligament injury, promotes cartilage degradation and subchondral bone remodeling, leading to the development of OA [7,11,12,17,18,19]. Osteoblasts, osteocytes, and chondrocytes are all mechanosensitive cells that release catabolic and inflammatory factors when submitted to an excessive mechanical load [20,21,22,23,24]. Moreover, compression was proposed to be responsible for the phenotypic changes of osteoblasts in OA subchondral bone leading to sclerosis of the subchondral bone plate [22]. In this context, Gremlin-1 (Grem-1) has been identified as a mechanosensitive factor, whose expression is increased in articular cartilage under a tensile mechanical loading or joint injury [25,26,27,28]. The expression of Grem-1 in articular cartilage and its concentration in the serum of OA patients have been correlated with OA progression [14,26,29,30]. Interestingly, Grem-1 expression in OA cartilage is increased in the deepest layers of cartilage, where hypertrophic chondrocytes are found [28]. The hypertrophic differentiation of chondrocytes is a typical feature of OA cartilage and is currently considered as playing a pivotal role in cartilage disappearance and subchondral bone remodeling [10].
Grem-1 acts through VEGFR-2 activation or bone morphogenetic protein (BMP) antagonism [31,32,33,34]. BMPs play an important role in skeletal tissue development and homeostasis. BMP-2, BMP-4, and BMP-7, which can be targeted by Grem-1 [30,35,36,37], indeed stimulate chondrocyte proliferation and extracellular matrix production and show joint protective effects. However, their expression increases with age-associated cartilage degradation in the temporomandibular joint [38]. BMP-2 is detected in OA cartilage, but it is expressed at a low level in healthy cartilage [39]. Interestingly, BMP-2, present in the cartilage and the bone of osteophytes [39], has been involved in osteophyte development, a typical feature of the pathological bone remodeling in OA [40]. In addition, serum levels of BMP-2 are increased in patients with hip OA, as it is also observed for BMP-4 [41]. However, the role of BMP-4 in OA is less characterized.
In the present study, we investigated the expression of Grem-1 and its partners at the osteochondral junction of patients with knee OA and by compressed osteoblasts and chondrocytes during their hypertrophic differentiation. Finally, we investigated the response of osteoblasts, prehypertrophic, and hypertrophic chondrocytes to Grem-1 and BMP-4 stimulation. Our results suggest that Grem-1 and BMP-4 may act as partners in the remodeling events occurring at the osteochondral junction in OA.

2.1. Overexpression of Gremlin-1 and BMPs at the Osteochondral Junction with OA Progression

2.3. Grem-1 and BMP-4 Increase the Remodeling Potential of Osteoblasts and Chondrocytes

Human OA knee samples (n = 6) were obtained from patients undergoing total knee joint replacement surgery for OA in the Department of Orthopedic Surgery and Traumatology of Saint-Antoine Hospital and in the Maussins-Nollet Clinic (Paris, France). Informed consent was obtained from each patient on the day before arthroplasty. Experiments using human samples have been approved by two French Institutional Review Boards (Comité de protection des personnes Ile de France V, Comité consultatif sur le traitement de l’information en matière de recherche).
Tissue pieces from the middle part of medial and lateral tibial plateaus and femoral condyles were preserved for histological analysis. The remaining cartilage from each joint compartment was separated from the underlining bone and cut into small pieces (1 mm3) before anincubation (6 mL/mg wet tissue) in RPMI culture medium supplemented with 100 U/mL penicillin, 100 µg/mL streptomycin, and 4 mM glutamine for 24 h at 37 °C, as described [23]. The same protocol was used for subchondral bone tissue. Conditioned media was then separated from tissues, centrifuged at 3000× g for 5 min to removed debris. Conditioned media and tissues were stored at −80 °C until analysis.

At the end of the culture period, two 12-wells osteoblasts in abundant collagen matrix were collected and placed into a well of a Biopress 6-wells plate (Dunn, Germany), in 1 mL of CO2 independent medium D containing 5% FBS, 100 U/mL penicillin, 100 µg/mL streptomycin, 2% of HEPES 1 M and 4 mM glutamine, as described [23]. All of the experiments were performed at 37 °C, in air. An intermittent compression with an air pression of 16.7 Pa at 10% of 1 Hz of frequency was applied for 24 h. The compressive stress was applied to individual samples by the Biopress system (Flexercell International) described by Fermor and colleagues [58], whereas the control osteoblasts were kept in unloaded conditions. After the application of the mechanical regimen, supernatants were collected, centrifuged, and stored at −80 °C for further analysis. The cell pellets were lysed for RNA extraction and were kept at −80 °C. Results are expressed as fold-induction in comparison to controls. Each experiment was carried out in duplicate, and at least nine experiments were performed.

4.5. Stimulation of Primary Cultures of Murine Chondrocytes and Osteoblasts

Digital images of magnification views (10×) of whole tissue sections were captured by using an Olympus SC50 camera on an Olympus IX83 microscope. The staining of each protein was quantified according to a semi-quantitative score, on the basis of the intensity and repartition of each staining in the whole joint junction. 0 = no staining, 1 = few staining, 2 = diffuse staining, 3 = intense staining, 4 = high intense staining. Sections were examined blindly in random order by two observers and the scores were averaged to minimize observer bias.

Correlations between Mankin scores and Grem-1, VEGFR-2, BMP-2, BMP-4, BMPR-1a, BMPR-1b, and BMPR-2 staining were established by Spearman’s rank test. The non-parametric Wilcoxon test was used to compare protein levels of BMP-2, BMP-4, and Grem-1 released by human articular cartilage vs. bone in OA patients. The qPCR normalized gene expression levels were compared between compressed and non-compressed osteoblasts, and between prehypertrophic and hypertrophic cells using Wilcoxon test. To analyze the cell response to rmGREM-1 and rmBMP-4, we used Friedman test to determine the dose response effect and adjusted p-value for comparison with the unstimulated group. The analyses mentioned above were performed using GraphPad Prism8 (GraphPad Software Inc., San Diego, CA, USA). 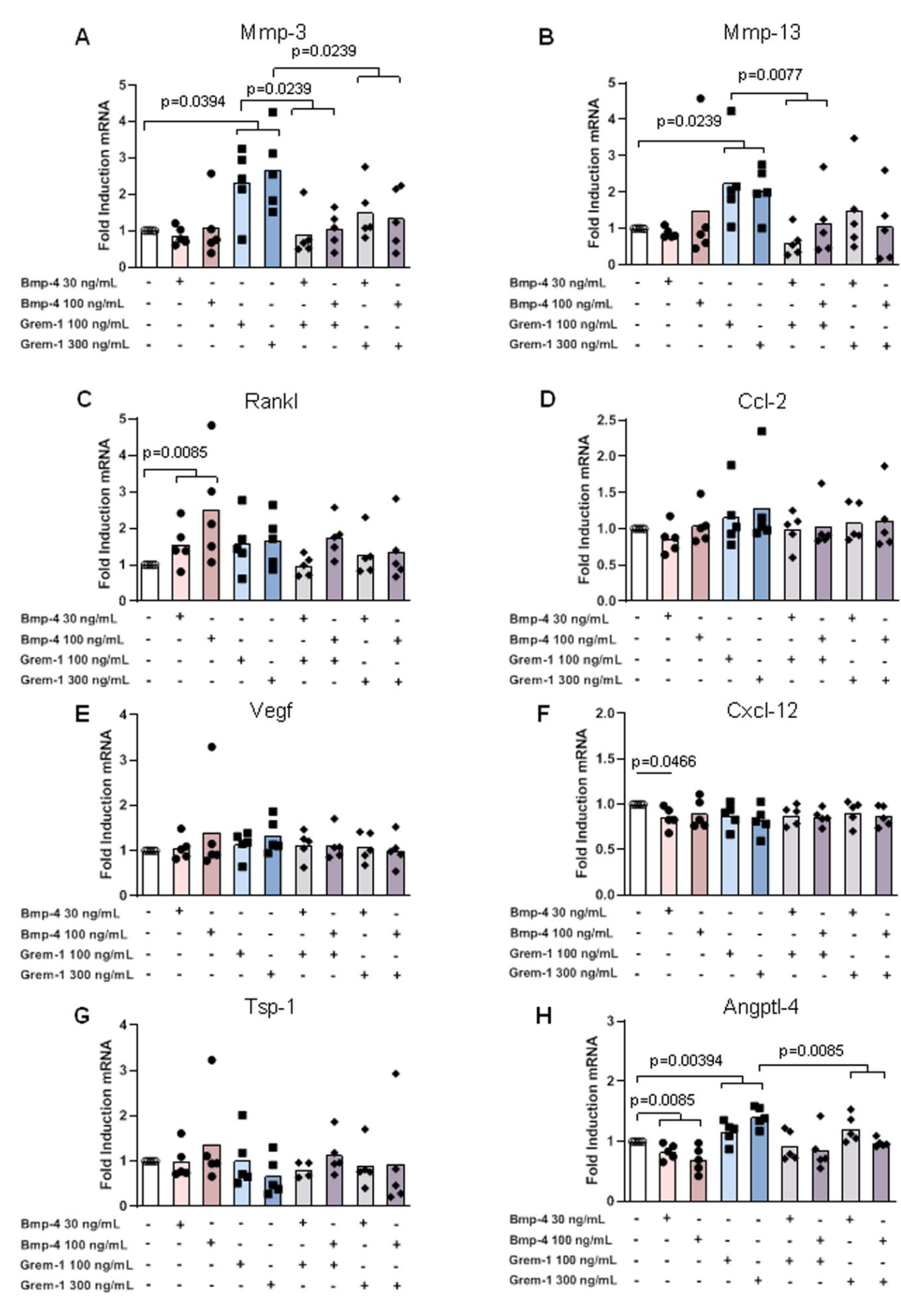 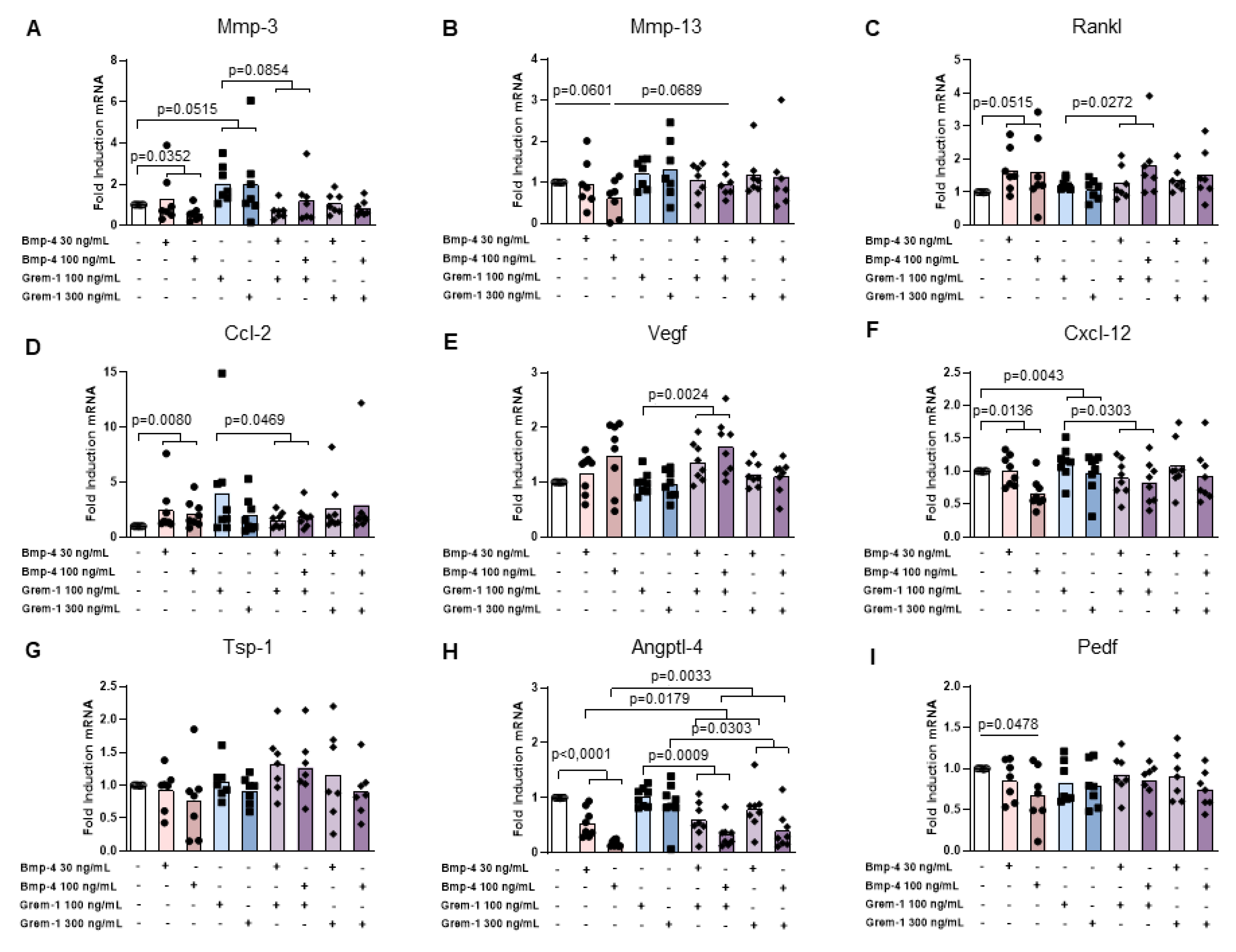