Response of Mycobacterium smegmatis to the Cytochrome bcc Inhibitor Q203

Staphylococcus aureus is a critical and commonly isolated human bacterial pathogen. Methicillin-resistant Staphylococcus aureus (MRSA), which is described as strains resistant to all available penicillin and other β-lactam antibiotics, warrants particular attention because of its limited treatment options. MRSA has been considered a hospital-acquired pathogen, but its prevalence in otherwise healthy patients without identified risk factors has reportedly increased. MRSA infections are classified as healthcare-associated MRSA (HA-MRSA) and community-associated MRSA (CA-MRSA); both strains are clinically, microbiologically, and genetically different [1,2,3]. In our 10-year (1999–2008) retrospective study, we found that the average rate of MRSA in S. aureus ocular infections was 52.8% [4]. The most common clinical presentation for both MRSA and methicillin-sensitive S. aureus (MSSA) ocular infections was keratitis [5]. We further analyzed clinical features and outcomes of S. aureus keratitis between 2006 and 2010, and found that advanced age and poor visual acuity at presentation, but not methicillin resistance, were important prognostic indicators for poor visual outcome in S. aureus keratitis [6,7]. However, our previously described studies were limited by lack of molecular data and the susceptibility of fluoroquinolones, the important ocular antibiotics.
The pathogenicity of S. aureus is related to various virulence factors, such as bacterial surface components, extracellular proteins, and toxins, which could cause profound tissue damage and modulate the immune response of the infections [8,9,10]. Among these virulence factors, Panton–Valentine leukocidin (PVL), which is predominantly present in CA-MRSA isolates but rarely observed in methicillin-sensitive S. aureus (MSSA) and HA-MRSA isolates, has caught the attention of numerous researchers [11,12,13,14,15]. PVL is a biocomponent toxin composed of LukS-PV and LukF-PV and assembles into a pore-forming heptamer on mainly polymorphonuclear neutrophils (PMN) and monocytes or macrophages, causing cell death; the toxin also induces the release of inflammatory cytokines from affected cells leading to tissue necrosis [16,17,18]. However, the role of PVL in the pathogenesis of S. aureus infections is equivocal, especially in vivo studies. Controversial data have been obtained using different animal models [12,13], which may have been caused by the differing immunology of the models, i.e., species specificity. Similarly, the effects of PVL on clinical presentation, severity, and outcomes are debated. Shalleross et al. recently presented results of a thorough systemic review of 76 clinical studies from 31 countries, and concluded that PVL genes are consistently associated with skin and soft-tissue infections and are comparatively rare in invasive disease but may increase morbidity in pediatric musculoskeletal infections [14]. However, little is known regarding the role of PVL genes in ocular infections compared with infections at other anatomical sites [19,20].
In this study, we aimed to investigate the molecular characterization, antibiotic susceptibility, and clinical features of S. aureus keratitis in Taiwan, and tried to determine the prevalence and clinical relevance of PVL in S. aureus keratitis.

Table 2 summarizes the demographics and risk factors related to S. aureus keratitis. No differences were observed in the distributions of age (p = 0.875), sex (p = 1.0), or source defined by epidemiology (p = 0.074) between MRSA and MSSA groups. Notably, 9 of 17 (52.9 %) patients with MRSA keratitis had no HA factors.
The most common predisposing factor for both MRSA and MSSA keratitis was ocular surface diseases and previous ocular surgery, which accounted for more than half of S. aureus keratitis. No differences in other local and systemic risk factors were discovered between MRSA and MSSA groups as well as PVL (+) and PVL (−) groups.

All patients with S. aureus keratitis were initially treated with topical levofloxacin (0.5%) or a combination of fortified antibiotics (vancomycin at 25 mg/mL and amikacin at 25 mg/mL). In 15 patients, the medication regimen was changed to 25 mg/mL vancomycin after obtaining the culture results. The rate of treatment modification did not differ significantly between the MRSA and MSSA groups (p = 1.0). Seven patients, three with MRSA and four with MSSA keratitis, required surgical interventions. Three patients, one with PVL (+) MRSA, the other with PVL (−) MRSA, and another with MSSA keratitis, received a patch graft with glycerol-preserved cornea for perforated ulceration. The other four patients (one PVL (+) MRSA and three MSSA keratitis) received amniotic membrane transplantation or tarsorrhaphy to promote re-epithelialization. No significant differences were identified in the rate of surgical intervention (p = 0.681), admission (p = 0.347), healing time (p = 0.648), or final visual outcome (p = 0.612) between the MRSA and MSSA groups (Table 4). There were no differences of treatments and outcomes between PVL (+) and PVL (−) S. aureus groups. Regression analysis demonstrated that a larger size of the corneal ulcer (p = 0.021), centrally located corneal ulcer (p = 0.038), elder age (p < 0.001), and higher LogMAR VA at presentation (p < 0.001) were associated with higher final LogMAR VA (i.e., worse vision).

S. aureus isolates were prospectively collected from patients with ocular infections in the microbiology laboratory of the Chang Gung Memorial Hospital, a 3700-bed medical center in Northern Taiwan, from January 1, 2013, to December 31, 2017. In total, 49 patients with S. aureus keratitis were identified. Medical records of these cases were retrospectively reviewed. Data collected included demographic information, medical and ocular history, systemic and local predisposing factors, clinical features, treatment, presenting and final visual acuity (VA), and length of follow-up.
Healthcare-associated criteria were defined on the basis of the definition proposed by the Centers for Disease Control and Prevention Active Bacterial Core Surveillance sites [43] and were as follows: specimens obtained after 48 h of admission, history of hospitalization, surgery, dialysis, living in a long-term care facility within 1 year, permanent indwelling catheter. Cases with none of these features were defined as being community-associated.
Empirical or fortified antibiotics were administered hourly to treat S. aureus keratitis. The antibiotic treatment regimens were subsequently modified on the basis of culture results, susceptibility testing, and clinical response. Surgical interventions were indicated in some cases given the clinical conditions. The healing time was recorded once the infiltration had subsided and the epithelial defect healed. If data were available, VA was recorded at least 2 months after the keratitis had subsided and stabilized. Snellen VA values were converted into logMAR units for statistical analysis. VA—assessed through counting fingers, hand movements, light perception, and no light perception—was recorded as logMAR following the schedule suggested by Scott et al. [44].

The antimicrobial susceptibility of all S. aureus isolates to antibiotics including cefoxitin, clindamycin, erythromycin, trimethoprim/sulfamethoxazole, teicoplanin, and vancomycin was routinely assessed using the disk diffusion method in our microbiology laboratory, following the guidelines of the Clinical and Laboratory Standards Institute antimicrobial susceptibility testing standards. Cefoxitin was used instead of oxacillin/methicillin to test for β-lactam antibiotic resistance. Moreover, an E-test (BioMerieux SA, Marcy-I’Etoile, France) was used to determine the susceptibility of isolates to fluoroquinolones—including ciprofloxacin, levofloxacin, gatifloxacin, and moxifloxacin—that were not included in the antibiotic susceptibility profiles in our microbiology laboratory.

All S. aureus isolates were tested by the presence of PVL genes. The PCR amplification of the lukS-PV and lukF-PV genes encoding PVL components was described previously [11]. ENREF 6 Other molecular methods used in this study included pulsed-field gel electrophoresis (PFGE) with SmaI digestion, multilocus sequence typing (MLST), and SCCmec typing. PFGE was used to fingerprint the MRSA clinical isolates and PVL (+) MSSA according to the procedures described in a previous study [45]. The criteria proposed by Tenover et al. [46] were used to analyze the DNA fingerprints generated by the PFGE typing. The genotypes were designated in alphabetical order. PFGE patterns with -4-band differences from an existing genotype were defined as subtypes of that genotype and were labeled with Arabic number suffixes. MLST was performed as described elsewhere [47]; the allelic profiles were assigned through comparison of the sequences at each locus with those of the known alleles in the S. aureus MLST database (https://pubmlst.org/saureus/ (accessed on 30 August 2022)) and were defined as sequence types (STs) accordingly. The SCCmec typing was determined by a multiplex PCR strategy described previously [48]. SCCmec type VT was determined by a particular primer described elsewhere [27]. Based on the molecular findings, the isolates carrying type I to III SCCmec and type IV or V SCCmec were classified as HA-MRSA and CA-MRSA, respectively [27].

The authors have no proprietary or commercial interest in any materials discussed in this article. This work was supported in part by Chang Gung Memorial Hospital, Linkou, Taiwan (grant number CMRPG 11002), but the funding organization had no role in the design or conduct of this research.

This study followed the Declaration of Helsinki and was approved by the Institutional Review Board of Chang Gung Memorial Hospital, Taiwan, (IRB107-2346C) which granted a waiver of consent because patient anonymity was maintained by the data source.

Patient consent was waived due to patient anonymity having been maintained by the data source.

The data analyzed during this study are available on request from the corresponding author, Ching-Hsi Hsiao. The data are not publicly available due to it containing information that could compromise the privacy of research participants.

The authors thank Wen-Hsuan Chen for assistance in data analysis. 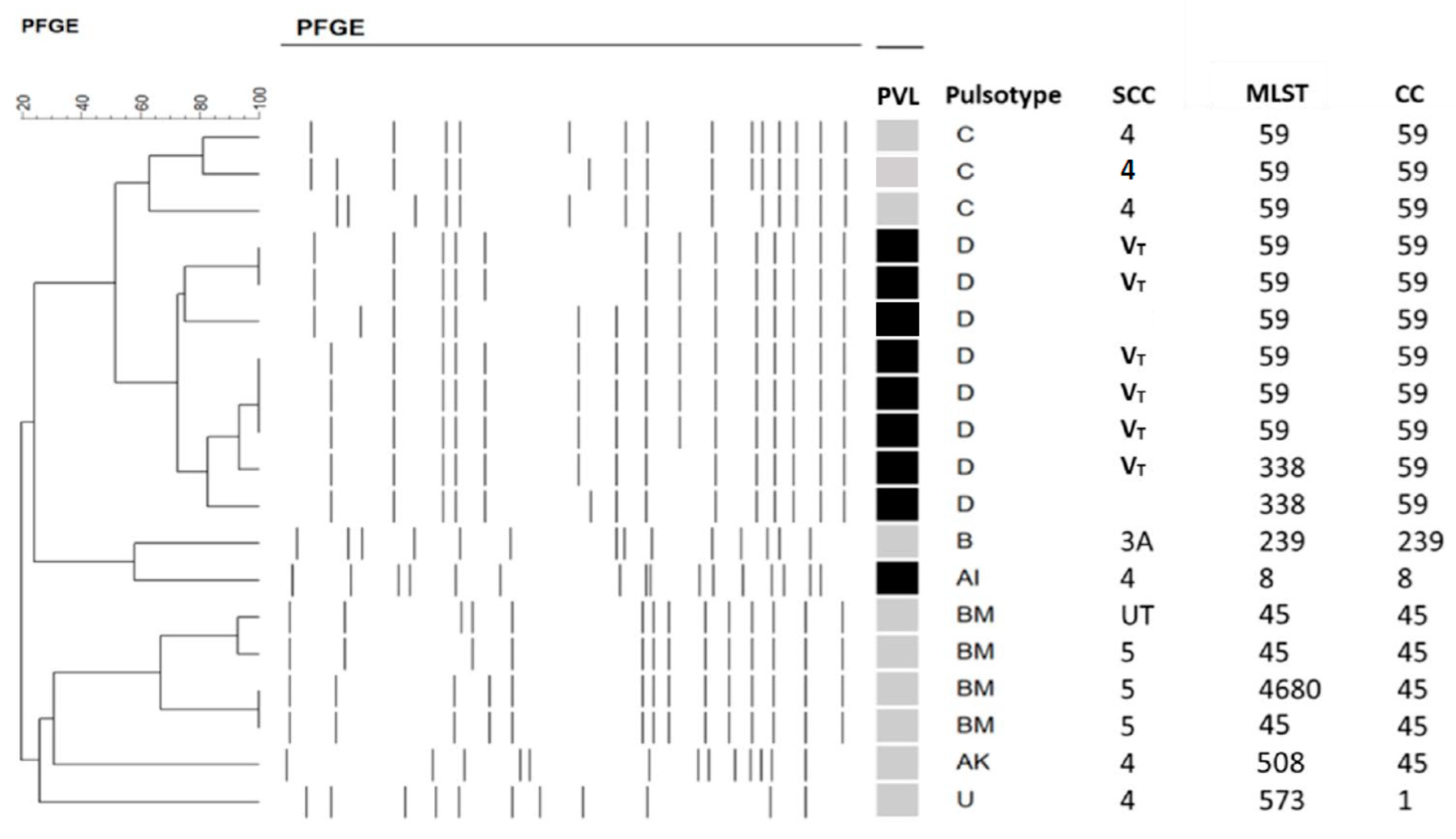