Autosomal recessive spastic ataxia of Charlevoix-Saguenay (ARSACS) is an early-onset neurodegenerative disease that was originally discovered in the population from the Charlevoix-Saguenay-Lac-Saint-Jean (CSLSJ) region in Quebec. Although the disease progression of ARSACS may start in early childhood, cases with later onset have also been observed. Spasticity and ataxia could be common phenotypes, and retinal optic nerve hypermyelination is detected in the majority of patients. Other symptoms, such as pes cavus, ataxia and limb deformities, are also frequently observed in affected individuals. More than 200 mutations have been discovered in the SACS gene around the world. Besides French Canadians, SACS genetics have been extensively studied in Tunisia or Japan. Recently, emerging studies discovered SACS mutations in several other countries. SACS mutations could be associated with pathogenicity either in the homozygous or compound heterozygous stages. Sacsin has been confirmed to be involved in chaperon activities, controlling the microtubule balance or cell migration. Additionally, sacsin may also play a crucial role in regulating the mitochondrial functions. Through these mechanisms, it may share common mechanisms with other neurodegenerative diseases. Further studies are needed to define the exact functions of sacsin. This review introduces the genetic mutations discovered in the SACS gene and discusses its pathomechanisms and its possible involvement in other neurodegenerative diseases. View Full-Text
Keywords: ARSACS; sacsin; neurodegeneration; ataxia; mutation ARSACS; sacsin; neurodegeneration; ataxia; mutation
►▼ Show Figures 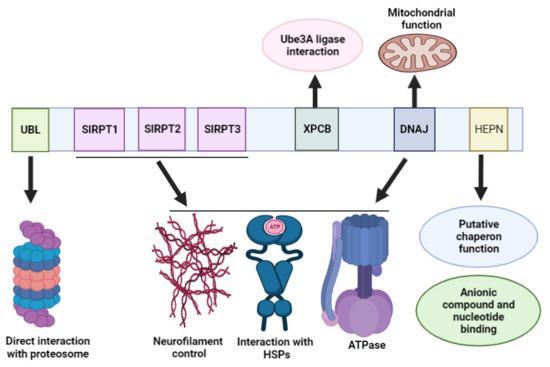 
Bagaria, Jaya, Eva Bagyinszky, and Seong S.A. An. 2022. "Genetics of Autosomal Recessive Spastic Ataxia of Charlevoix-Saguenay (ARSACS) and Role of Sacsin in Neurodegeneration" International Journal of Molecular Sciences 23, no. 1: 552. https://doi.org/10.3390/ijms23010552