Applying a feasible and straightforward study model to the pathophysiology of functional gastrointestinal disorders (FGIDs) is still challenging since FGIDs result from the complex interplay between several putative factors including genetics, biology, and psychological attitude. Thus, in recent years, to summarize and overcome this complexity, a “biopsychosocial model” has been conceptualized [1].
In this model, an important role is played by the enteric nervous system (ENS) that acts not only as a regulator of digestive and absorptive functions in the gut, but is also tightly connected with the central nervous system (CNS), constituting the brain–gut axis in which stress can modulate or activate several afferent and efferent connections [2].
Among FGIDs, irritable bowel syndrome (IBS) is a highly prevalent disorder affecting an estimated 10–15% of the worldwide population [3]. An inflammatory component has been suggested to contribute to the etiology of this syndrome [4], and miscommunication between the ENS and CNS has been evoked for the onset of several symptoms apart from the classical and major gastrointestinal (GI) ones (e.g., abdominal pain, diarrhea, and constipation). Based on this assumption, migraine, fibromyalgia, cycling vomiting syndrome, and mood disorders have all been considered functional comorbidities for IBS [5].
These functional GI and extra-GI alterations have recently been associated with low cellular energy metabolism, driven by defects in the bioenergetics supply and the intracellular mitochondrial network [6]. Emerging evidence supports a broader role of mitochondria in several GI disorders of both inflammatory and malignant nature [7,8,9]. Mitochondria have also been suggested to play a crucial role in the rescue from the stress-mediated symptoms, as these organelles are the source of the energy supply for adaptive responses [10].
Mitochondrial implications in IBS do not rely only on their role as a cell powerhouse, but also on the extensive crosstalk between these organelles and the intestinal microbiota [11,12], and recent studies have demonstrated that an altered balance of microbial populations in the gut lumen is associated with the IBS pathogenesis and gut–brain connection [13].
There is an increased interest in using low carbohydrate diets like the ketogenic diet (KD) in IBS treatment [14], even if the reports are still few and lack firm conclusions. The low carbohydrate content in KD has been demonstrated to be protective against the proinflammatory effects of saturated fatty acid intake, at least in the contest of a balanced medium-/long-chain triglyceride composition [15].
The high fat, adequate-protein, low carbohydrate KD reprograms metabolism, forcing the body to utilize fat as a source of energy as it occurs during the fasting state. Through ketogenesis, fatty acids are oxidized to ketone bodies in the liver mitochondria and then distributed via the blood to the other organs to be consumed as fuel. It is considered an effective treatment in neurological [16] and mood disorders [17], also given its ability to remodel the gut microbiota and, consequently, impact the brain–gut axis [16].
Pleiotropic effects of KD involve many targets of oxidative stress, inflammation, and mitochondrial function and biogenesis, so it is suggested as a dietary therapeutic approach in the mitochondrial Leber hereditary optic neuropathy [18] and for the impaired mitochondrial functions in the autism spectrum disorder (ASD) [19].
Limited research has explored the effects of chronic psychosocial stress [10] or early-life stress (ELS) on gut mitochondria [20], leading to the conclusion that mitochondrial activity was disturbed [10,20]. On these bases, the present study aimed to evaluate the KD efficacy in reducing the harmful effects of stress on gut mitochondrial functions.
To achieve this goal, newborn Wistar rats were exposed to ELS through maternal deprivation (MD) to induce IBS in adulthood. Different determinants for IBS were taken into account and studied in colon samples of rats exposed to ELS and afterward fed with KD or a standard diet (Std), along with unexposed control rats. In detail, the intestinal inflammation was evaluated by the levels of cyclooxygenase-2 (COX-2) and Toll-like receptor-4 (TRL-4). The antioxidant response and the cellular redox status were investigated by assaying the levels of cytoplasmic and mitochondrial superoxide dismutases (SOD 1 and SOD 2, respectively), the mitochondrial peroxiredoxin III (PrxIII), and the content of oxidatively modified purines in the D-loop region of mtDNA. Mitochondrial biogenesis was studied by assaying the protein levels of the ligand-inducible transcription factor peroxisome proliferator-activated receptors-γ (PPAR-γ) and its co-activator peroxisome proliferator-activated receptor-gamma co-activator-1 alpha (PGC-1α), along with markers of mitochondrial mass such as levels of cytochrome c oxidase, subunit4 (COX-4), and mtDNA relative content. Finally, as markers of autophagy, the levels of Beclin-1 and LC3 II were analyzed.

2.1. Evaluation of Markers of Inflammation and Determination of the Redox Status

The etiopathogenetic inflammatory component in the IBS was evaluated by western blot analysis by determining the levels of COX-2 and TLR-4 proteins in the colon tissue of control, IBS-Std, and IBS-KD rats. As shown in Figure 1, the levels of COX-2 (Panel A) and TLR-4 (Panel B) were significantly about 2-fold higher in IBS-Std than the controls. Concerning both proteins, rats treated with KD showed values not significantly different from those in the controls.
The possible imbalance in redox status was determined by analyzing the levels of the cellular (SOD 1) and mitochondrial (SOD 2 and PrxIII) antioxidant enzymes, along with the content of oxidatively modified purines in mtDNA.
As in Figure 2 (Panels A and B), the levels of SOD 1 and SOD 2, determined by the ELISA test, were higher, although not significantly, in IBS-Std rats and quite similar to controls in IBS-KD rats.
The levels of the mitochondrial ROS scavenger PrxIII, evaluated by western blot analysis, showed the same feature with a not significant increase in IBS rats fed with Std and values similar to those of controls in IBS rats fed with KD (Figure 2, Panel C).
The incidence of oxidatively modified purines, mainly 8-oxo-deoxyguanosine (8-oxodG) at the D-loop, the major control region of mtDNA, was determined using the oxidized purines-sensitive enzyme formamidopyrimidine DNA glycosylase (Fpg). The incidence appeared to be approximately two-fold higher in IBS-Std rats than Ctrl rats, and the KD appeared to be able to reduce this content to values similar to those in the controls (Figure 3).

Levels of PPAR-γ, PGC-1α, COX-4 (evaluated by western blot analysis), and the mtDNA content (evaluated by qPCR) were determined.
All the protein contents resulted in being significantly decreased by approximately two-fold in IBS-Std compared to the controls (Figure 4, Panels A–C).
The content of the specific loading marker VDAC1 was analyzed to exclude that the obtained findings could be derived from a different loading of mitochondrial proteins. No statistically significant differences were found among the three experimental groups (Figure 4, Panel D).
The mtDNA also appeared to be significantly reduced (about 2-fold) in IBS-Std than in the controls (Figure 5).
The KD was able to counteract such a reduction since the levels of all parameters were not statistically different from those in the control rats (Figure 4 and Figure 5).

2.3. Evaluation of Markers of Autophagy

As a measure of autophagy, the protein content of Beclin-1 and LC3 II was determined by western blot analysis.
As shown in Figure 6, significant decreases (1.8 fold) in Beclin-1 (Panel A) and LC3 II (−60%) (Panel B) levels were observed in IBS-Std rats compared with the control ones. The ability of the KD to rescue from these variations and restore values as in the controls was evident.

The study was approved by the Italian Ministry of Health (approval date: 28 November 2018, no. 901/2018-PR) according to European Union guidelines (Directive 2010/63/EU for animal experiments).
The animals were housed at the animal facility of the National Institute of Gastroenterology “S. De Bellis” Research Hospital, Castellana Grotte, Bari, Italy. All the applied procedures followed the International Guidelines for the use of laboratory animals, minimizing animal suffering.
The animal model chosen is the newborn Wistar Rat subjected to ELS through MD to induce IBS in adulthood [58]. Postnatal Day 0 (PND 0) was considered as the birthday. Within PNDs 2 to 14, the puppies experienced MD for 3 h a day.
The experimental design provided that, after weaning, the animals subjected to MD were further divided into two subgroups, one group fed a standard diet (IBS-Std), and one group fed a low carbohydrate, high fat ketogenic diet (IBS-KD). A control group of animals without MD and fed a standard diet was also included (Table 1).
Diets were supplied as pellets (4RF21 standard diet and KD purchased by Mucedola Srl, Settimo Milanese, Italy) and administered for ten weeks after PND 14 (Table 2).
Rats were checked every day, evaluating different parameters regarding the degree of suffering and stress-induced experimentally (namely, blepharospasm, hollow cheeks, abnormal position of the ears and the whiskers, appetite loss, and liquid stools). Each parameter was recorded, attributing a score from 0 (absent) to 2 (evident) to calculate the possible onset of pain and suffering.
All animals in the study did not show any of the above parameters, except for a slowdown in the growth of puppies with MD, which showed lower weights than the control group puppies.
After treatment, the animals were sacrificed by anesthetic overdose, and colon samples were immediately removed and stored at −80 °C until assayed.

Due to the non-normal distribution of the data, nonparametric tests were performed. Data were analyzed by Kruskal–Wallis analysis of variance and Dunn’s Multiple Comparison Test. Differences were considered significant at p < 0.05. All data represent the results of at least two independent experiments and are expressed as mean ± SEM. A specific statistical package for the exact nonparametric inference package (StataCorp. 2005; Stata Statistical Software: Release 9, College Station, TX, USA) was used.

The study was approved by the Italian Ministry of Health (approval date: 28 November 2018, no. 901/2018-PR) according to the European Union guidelines (Directive 2010/63/EU for animal experiments). All the applied procedures followed the International Guidelines for the use of laboratory animals.

The authors thank Vito Spilotro for his excellent technical support. 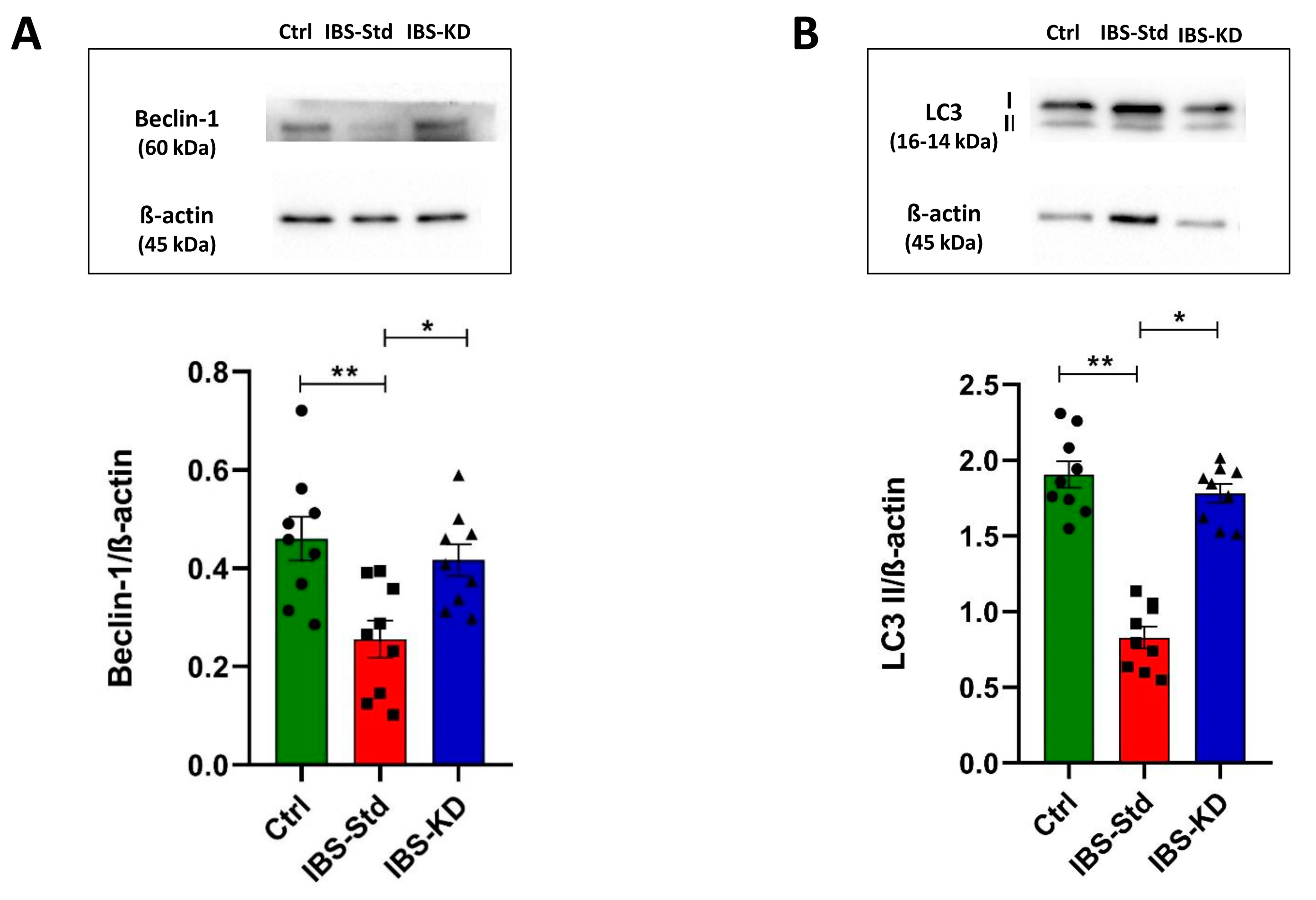