Elizabeth A. Fitzpatrick
2,* and

Two siblings with CF are homozygous for F508del (referred to as Subject A and Subject B). Despite having the same CFTR genotype and similar environment, these two subjects exhibited different disease phenotypes. We analyzed their medical records and CF Foundation Registry data and measured inflammatory protein mediators in their sputum samples. Then, we examined the longitudinal relationships between inflammatory markers and disease severity for each subject and compared between them. Subject A presented a more severe disease than Subject B. During the study period, Subject A had two pulmonary exacerbations (PEs) whereas Subject B had one mild PE. The forced expiratory volume in 1 s (FEV1, % predicted) values for Subject A were between 34–45% whereas for Subject B varied between 48–90%. Inflammatory protein mediators associated with neutrophils, Th1, Th2, and Th17 responses were elevated in sputum of Subject A compared with Subject B, and also in samples collected prior to and during PEs for both subjects. Neutrophilic elastase (NE) seemed to be the most informative biomarkers. The infectious burden between these two subjects was different.
Keywords: cystic fibrosis (CF); CFTR; F508del-CFTR; disease phenotypes; infection; inflammation; biomarkers cystic fibrosis (CF); CFTR; F508del-CFTR; disease phenotypes; infection; inflammation; biomarkers

Cystic fibrosis (CF) is a life-shortening autosomal recessive disease caused by the absence or dysfunction of the CF transmembrane conductance regulator (CFTR) channel activity, resulting from mutations in the CFTR gene [1,2]. There are more than 70,000 patients with CF worldwide [3]. The incidence of CF and the frequency of specific mutations vary among ethnic populations [4,5]. Clinically, CF can affect multiple organs, including the upper airway, lungs, pancreas, sweat glands, gastrointestinal (GI) tract, liver, and vas deferens [6]. Chronic lung disease causes most of the CF-associated morbidity and mortality. CF lung disease starts early and silently in infancy and progresses rapidly during childhood. CF lung disease is characterized by mucus obstruction, chronic bacterial infection, and excessive inflammation. These symptoms cause bronchiectasis and progressive lung function decline [7]. The median life expectancy for patients with CF has improved to more than 40 years, attributable to the early diagnosis, care provided by specialized centers, and development of novel therapies [8].
Currently, 2103 mutations have been identified in the CFTR gene [9]. Based on defect(s) nature, mutations can be grouped into six categories [10,11]. The classification of CFTR mutations helps define dysfunction-specific strategies to restore CFTR channel function. F508del (cDNA Name: c.1521_1523delCTT; Protein name: p.Phe508del) is the most prevalent CFTR mutation, with approximately 80–85% of CF patients carrying it on at least one allele worldwide. It should be noted that, in addition to genotype, other genetic and environmental factors strongly influence the severity of CF disease, which include modifier genes and genomic regions (e.g., SLC9A3, MUC4/MUC20) [12], socioeconomic status [13], and secondhand smoke exposure [14]. Chronic microbial colonization and infections are also major factors affecting the disease outcomes. Bacteria are considered classic CF pathogens. Pseudomonas aeruginosa, methicillin-resistant Staphylococcus aureus (MRSA), and Burkholderia cepacia complex species have significant impacts on lung function and mortality rates in CF patients. Viral infections (e.g., respiratory syncytial virus) and fungal infections (e.g., Aspergillus species) are increasingly recognized as important components of the CF airway infections and contribute to CF disease progression [15].
Biomarkers in CF can be categorized into two groups (i) biomarkers of CFTR function, including sweat chloride levels, nasal potential difference, intestinal current measurements, and (ii) biomarkers of disease outcomes, such as biomarkers in blood, biomarkers of inflammation, and biomarkers of infection. Biomarkers in CF are usually measured in broncho-alveolar lavage (BAL) fluid, sputum, exhaled breath, and blood samples [16,17]. Effective CF biomarkers can aid in the disease diagnosis, monitoring, and treatment.
In this study, we show the clinical case of two siblings homozygous for F508del. Despite having the same CFTR genotype and similar environmental exposure, the two siblings exhibited different disease phenotypes. To better understand these disease variations and to potentially identify their clinically relevant biomarkers, we tested a panel of inflammatory protein mediators in their sputum samples and explored the possible correlations between the levels of these mediators and disease severity for each subject. We also compared these parameters between two siblings.

Because inflammation in CF lungs is dominated by the infiltration of neutrophils and the release of oxidants and proteases [18,19], we first measured interleukin 8 (IL-8) and neutrophilic elastase (NE) levels in these samples using enzyme-linked immunosorbent assay (ELISA). IL-8 is a proinflammatory and chemoattractant cytokine, and has been shown to play a key role in the recruitment of neutrophils and other immune cells during inflammation [19]. Subject A generally had higher IL-8 levels in sputum samples than Subject B (Figure 1A, Table 4). Also, the NE levels of Subject A were generally higher than those of Subject B (Figure 1B, Table 4). However, these differences did not reach the level of statistical significance (p = 0.97 for IL-8; p = 0.22 for NE). During PE period of Subject B and preceding the PEs of Subject A, the IL-8 and NE levels increased dramatically (Figure 1, Table 4). The NE levels marginally correlated with FEV1 (% predicted) for Subject A (p = 0.08 (Pearson’s product-moment correlation and Spearman’s rank correlation)), but not for Subject B. There was no correlation between the IL-8 level and FEV1 (% predicted) for either subject.
Based on IL-8 and NE data, which seemed to show higher concentrations of these cytokines in the sputum of Subject A who exhibited a more severe lung disease phenotype, we next measured a panel of other inflammatory mediators in these samples using a multiplex bead-based assay. We found that the neutrophil myeloperoxidase (MPO) and Tumor necrosis factor alpha (TNFα) were generally increased in Subject A in comparison to Subject B (Figure 2A,B). TNFα peaked preceding the 1st PE of Subject A (sample from Visit 1) (Figure 2A). Granulocyte-macrophage colony-stimulating factor (GM-CSF) was elevated in samples from both patients (Figure 2C). Interestingly, Subject B had increased levels of the neutrophil chemokine growth related α protein (Gro-α) compared to Subject A (Figure 2D).

2.3. Levels of Other Inflammatory Mediators in Sputum Samples

In addition to neutrophil-associated markers, CF patients also exhibit elevated levels of other pro-inflammatory cytokines. We found that several cytokines including IL-6, B-cell activating factor (BAFF), serum TNF-related weak inducer of apoptosis (TWEAK), IL-27, interferon gamma (IFNγ), IL-13, monocyte chemoattractant protein-1(MCP-1), and IL-1 receptor antagonist (IL-1Ra) were increased in the sputum of Subject A in comparison to Subject B (Figure 3A–H). Only during a GI illness did Subject B exhibit an increase in these cytokines (sample from Visit 5, Figure 3A–H). There were other cytokines, including IL-22, IL-9, IL-1α, and IL-1β, that were elevated in sputum from both patients, although their levels fluctuated between samples collected at different time points (Figure 4A–D).

The levels of a panel of inflammatory mediators in sputum samples were measured using an 18-plex ProcartaPlex™ Multiplex Immunoassay according to manufacturer’s instructions (Invitrogen, Carlsbad, CA, USA). Cytokine standards were prepared to determine the concentration of cytokines in the samples. The samples were run on a Millipore Magpix instrument (Burlington, MA, USA) and analyzed with xPONENT software (Version 4.2, Austin, TX, USA). For data analysis, a five-parameter logistic curve fitting method was applied to the standards and the sample concentrations extrapolated from the standard curve.

To determine if there is a correlation between FEV1 and IL-8 levels, FEV1 and NE levels, two types of correlation coefficients, the product-moment (Pearson) and rank (Spearman), were calculated. The analysis was conducted using the R programming language (Version 3.4.0, The R Foundation, Vienna, Austria). Two-tailed t-test was used to compare the IL-8 and NE levels between two subjects. p < 0.05 was considered significant.

The following are available online at https://www.mdpi.com/1422-0067/22/5/2631/s1, Experimental procedure: Measurements of IL-8 and NE levels in sputum samples using ELISA.

The study was conducted according to the guidelines of the Declaration of Helsinki, and approved by the Institutional Review Board of the University of Tennessee Health Science Center (15-03851-XP, date of approval: 21 April 2015).

Written informed consent has been obtained from the patients to publish this paper.

The data presented in this study are available on request from the corresponding authors. The data are not publicly available due to privacy and ethical restrictions. 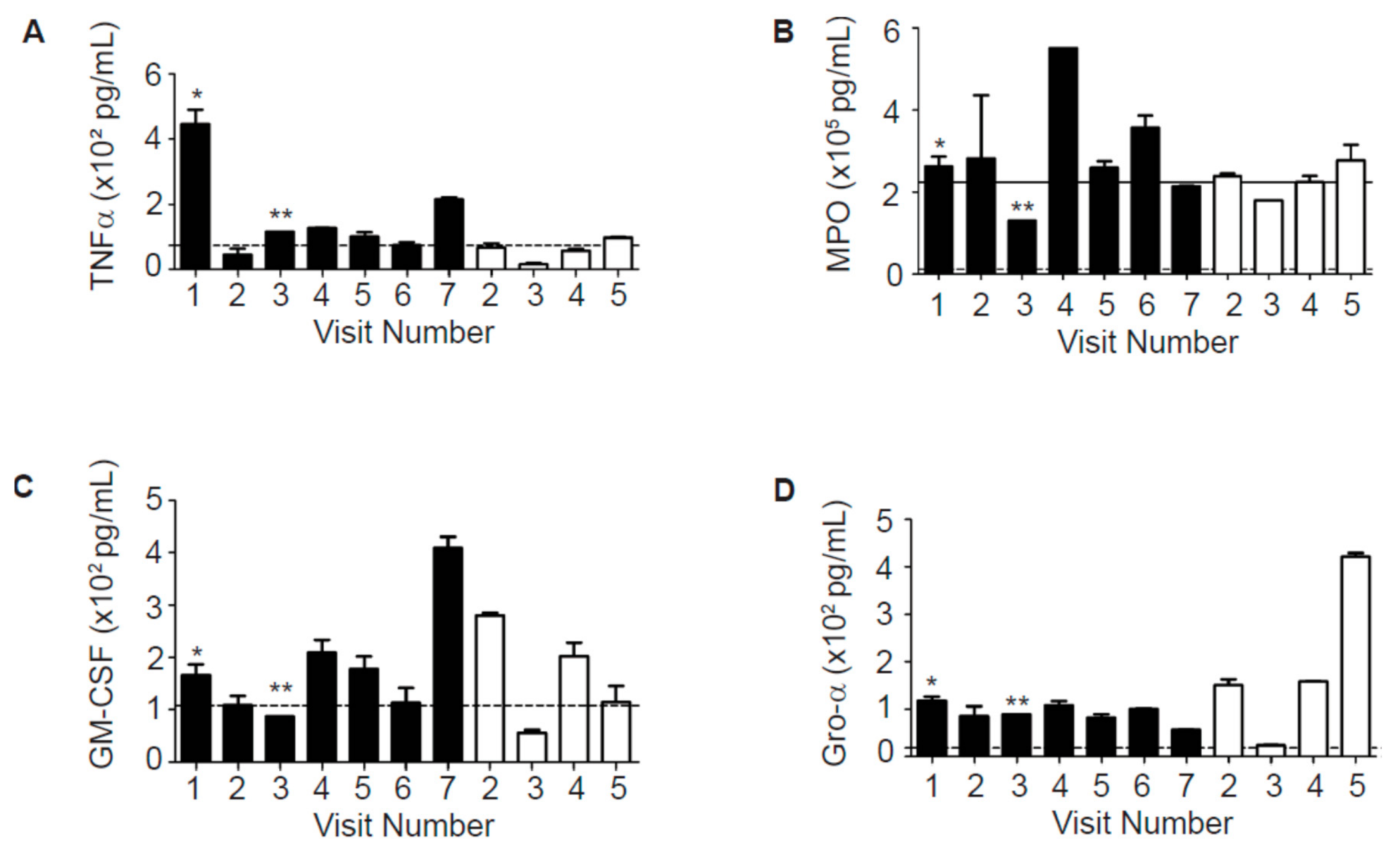 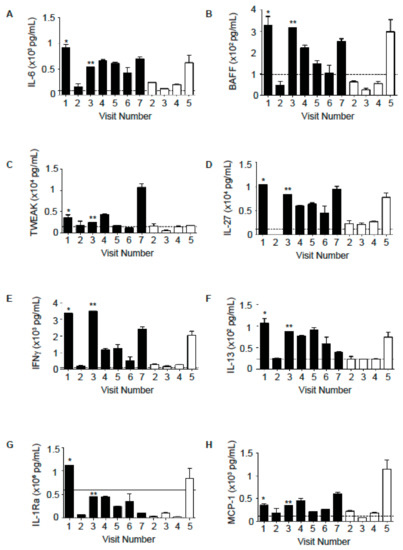 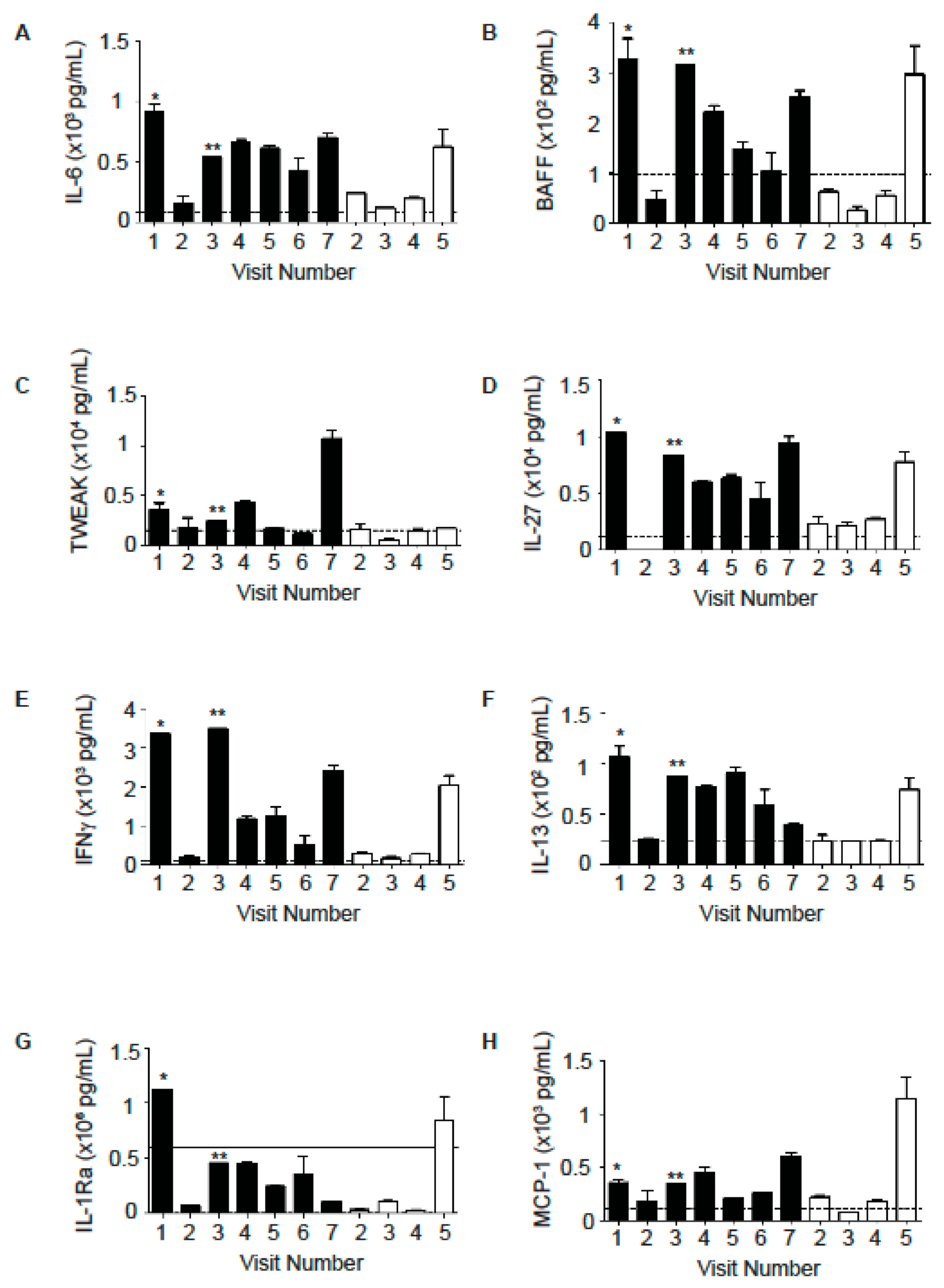 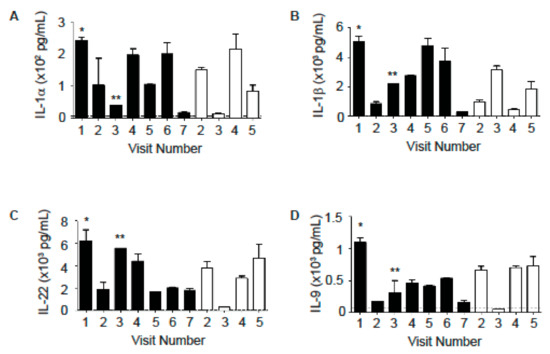