Expression and Localization of Thrombospondins, Plastin 3, and STIM1 in Different Cartilage Compartments of the Osteoarthritic Varus Knee
Previous Article in Journal

COMP and TSP-4: Functional Roles in Articular Cartilage and Relevance in Osteoarthritis

:
Osteoarthritis (OA) is a degenerative bone disease that involved micro and macro-environment of joints. To date, there are no radical curative treatments for OA and novel therapies are mandatory. Recent evidence suggests the role of miRNAs in OA progression. In our previous studies, we demonstrated the role of miR-31-5p and miR-33a families in different bone regeneration signaling. Here, we investigated the role of miR-31-5p and miR-33a-5p in OA progression. A different expression of miR-31-5p and miR-33a-5p into osteoblasts and chondrocytes isolated from joint tissues of OA patients classified in based on different Kellgren and Lawrence (KL) grading was highlighted; and through a bioinformatic approach the common miRNAs target Specificity proteins (Sp1) were identified. Sp1 regulates the expression of gap junction protein Connexin43 (Cx43), which in OA drives the modification of (i) osteoblasts and chondrocytes genes expression, (ii) joint inflammation cytokines releases and (iii) cell functions. Concerning this, thanks to gain and loss of function studies, the possible role of Sp1 as a modulator of CX43 expression through miR-31-5p and miR-33a-5p action was also evaluated. Finally, we hypothesize that both miRNAs cooperate to modulate the expression of SP1 in osteoblasts and chondrocytes and interfering, consequently, with CX43 expression, and they might be further investigated as new possible biomarkers for OA.
Keywords:
osteoarthritis; microRNAs; osteoblasts; chondrocytes; SP1; CX43

Osteoarthritis (OA) is a common degenerative joint disease characterized by cartilage degradation, synovitis, subchondral bone sclerosis and osteophyte formation [1]. OA etiology is complex and multifactorial, including biological and biomechanical factors, micro and macro environments, pathogenetic factors such as obesity, joint trauma, joint infection, previous rheumatoid arthritis, muscle weakness, metabolic disorders, disorders of bone turnover and genetics [2]. These factors act alone or in synergy to initiate a cascade of pathophysiological intra-articular reactions, leading to the i) altered activation of the synoviocytes, ii) activation of innate immune non-antigen specific response with the subsequently release of various inflammatory cytokines, and iii) the presence of cell debris and the disruption of the collagenous fibrillar network inside the joint [3]. The response of the bone cells to these different signals leads to a lower regenerative response of the osteoblasts and to an increase in the maturation of the osteoclasts, determining the lower efficiency of the osseointegration of the prosthesis [4]. For these reasons, OA patients suffer from persistent pain, stiffness and disability.
Conventional treatment includes exercise, physical therapy, life-style changes and pain medications, but no radical curative treatments are available and novel therapies for OA are urgently required. The development of cell therapies, especially with the use of mesenchymal stromal cells (MSCs), for the treatment of joint cartilage lesions or worsening of confirmed OA, have proved promising [5]. In recent years, many studies have focused on the possible roles that some miRNAs involved in musculoskeletal processes could have as predictive or prognostic biomarkers of OA and prosthesis osteointegration [6].
MiRNAs are attractive candidates as multifunctional regulators of bone signaling and have been investigated as new biomarkers of bone disease or bone regeneration. In our recent studies, different miRNAs involved in bone regeneration were identified, such as: (i) miRNA-675-5p, a modulator of HIF-1α and Wnt/b-catenin signalings in hMSCs [7]; (ii) miRNA-31-5p, a mechanosensitive-miRNA involved in hMSCs hypoxia response [8]; and miR-33a family miRNAs regulating YAP/TAZ expression during hMSCs osteoblast differentiation [9].
Concerning the role of miRNAs as biomarkers of OA, the following aspects have been highlighted: (i) miRNA expression in osteoporosis patients [10]; (ii) miR-140-3p, miR671-3p and miR-33b-3p as potential biomarkers for the evaluation of OA risk and progression [11]; and (iii) the differential miRNAs expression in synoviocytes isolated by fluid and plasma of OA patients as promising diagnostic biomarkers [6].
During the last few years, evidence has suggested the involvement of a specific protein (Sp)- transcription factor family in OA progression, whose role in osteosarcoma progression has been already investigated by bioinformatic approaches [12]. The essential role of Sp7 (Osterix) for bone development and mineralization has been already investigated through in vitro and in vivo approaches [13,14,15], by means of physiological and pathological models, while the possible role of specific protein (Sp)- transcription factor 1 (Sp1) has been partially understood [16,17]. Indeed, the in vitro studies in osteoblasts [16,18], osteoclasts [19], chondrocytes [20] and BMSCs [17] have suggested the role of Sp1 in bone cell differentiation and formation, regulating for example COL1A1 and Frizzled1 (FZD1) expression and consequently the regulation of osteoblast mineralization [13]. Sp1 regulates the expression of multiple genes, such as nuclear protein and basal transcription factors that showed on their promoter regions’ GC-rich sequences, which are Sp1 binding sites. The polymorphism to Sp1 binding sites in osteoblast genes reduced bone mineral density and increased risk of osteoporotic fracture [13,21,22].
Several in vitro studies showed a new role of Sp1 as regulator of the extracellular matrix and gap-junction proteins. The latter were found to be altered in OA contributing to the development of the disease; this alteration induces a modification in inflammatory response, mechanotrasduction signaling and gene expression through a direct link to Connexin-response CT-rich sequences in the target promoter genes [23]. Connexin-43 (Cx43) is one of the gap-junction targets of Sp1, but the interaction between Sp1 and Cx43 has been not well defined. In bone tissue, CX43 showed a Sp1 binding site in its promoter, favoring an efficient ERK1/2 activation and promoting osteoblast genes expression and functions [24]. In addition, new evidences suggest that CX43 regulates osteoblast differentiation through the additional recruitment of Sp1 to the osteoprotegerin proximal promoter, resulting in robust transcription of anti-osteoclastogenic factor, thus favoring the osteoblast differentiation [25,26]. Recent proteomic evaluations have suggested a direct role of Cx43 in the development of OA, through an enrichment of CX43 interactors in OA samples compared to control samples [27]. In addition, Stains et al., demonstrated the ability of CX43 to alter the recruitment of Sp1/ Sp3 to the promoter of COL1A1 or other genes, modifying their expression, particularly in the tumor model of osteosarcoma [28].
In the present study, the possible involvement of miR-31-5p and miR-33a-5p in the regulation of crosstalk between SP1 and CX43 in OA disease was investigated in vitro to define their prognostic role in OA disease monitoring. Preliminary miRNAs expression was carried out in osteoblasts (OB) and chondrocytes (CH) isolated from waste surgical tissues of hospitalized patients who underwent joint arthroplasty with different Kellgren and Lawrence (KL) grading. Through bioinformatic analysis, it was determined which miRNAs were strongly modulated in isolated cells and the correlation between the common miRNAs target SP-1 and its relative target Cx43 was investigated.

To investigate the possible common targets between miR-31-5p and miR-33a-5p involved in OA signaling, a bioinformatic analysis of miR-31-5p and miR-33a common predicted targets was performed. Using the bioinformatics tool miRTargetLink Human (https://ccb-web.cs.uni-saarland.de/mirtargetlink/ (accessed on 27 February 2021)) we identified the miRNAs common targets, as shown in the central node of Figure 2. The central node is surrounded by the validated targets with strong (e.g., luciferase assay in green) and weak (e.g., microarray in blue) evidence. Transcription factor SP1 was one of the predicted targets; it showed a strong and weak link with miR-33a-5p and miR-31-5p, respectively, as demonstrated by miRTarBase investigation (http://miRTarBase.mbc.nctu.edu.tw/ (accessed on 27 February 2021)).

2.3. Modulation of SP-1 Expression in OA

In conclusion, the current findings provide insightful knowledge on the significant role of miR-31-5p and miR-33a-5p in OA. The understanding of their molecular mechanisms in regulating SP1 expression might be pivotal to better clarifying osteoblast dysfunctions and chondrocytes modifications during the OA pathophysiological processes. In the current study, the crosstalk between SP1 and CX43 signaling, mediated by the probable regulation of miR-31-5p and miR-33a-5p, respectively, in osteoblasts and chondrocytes, has been preliminary elucidated. Findings provided novel evidence on miR-31-5p and miR-33a-5p as new biomarkers for identification of different OA grades, and eventually as possible actors of personalized gene therapies for treating OA disorders.

The study was conducted according to the guidelines of the Declaration of Helsinki, and approved by Ethics Committee-Protocol ID: CE AVEC 287/2018/Sper/IOR and 04/06/2018.

The informed consent was obtained from all subjects involved in the study.

The data presented in this study are available on request from the corresponding author. The data are not publicly available due to non-completion of the clinical study. 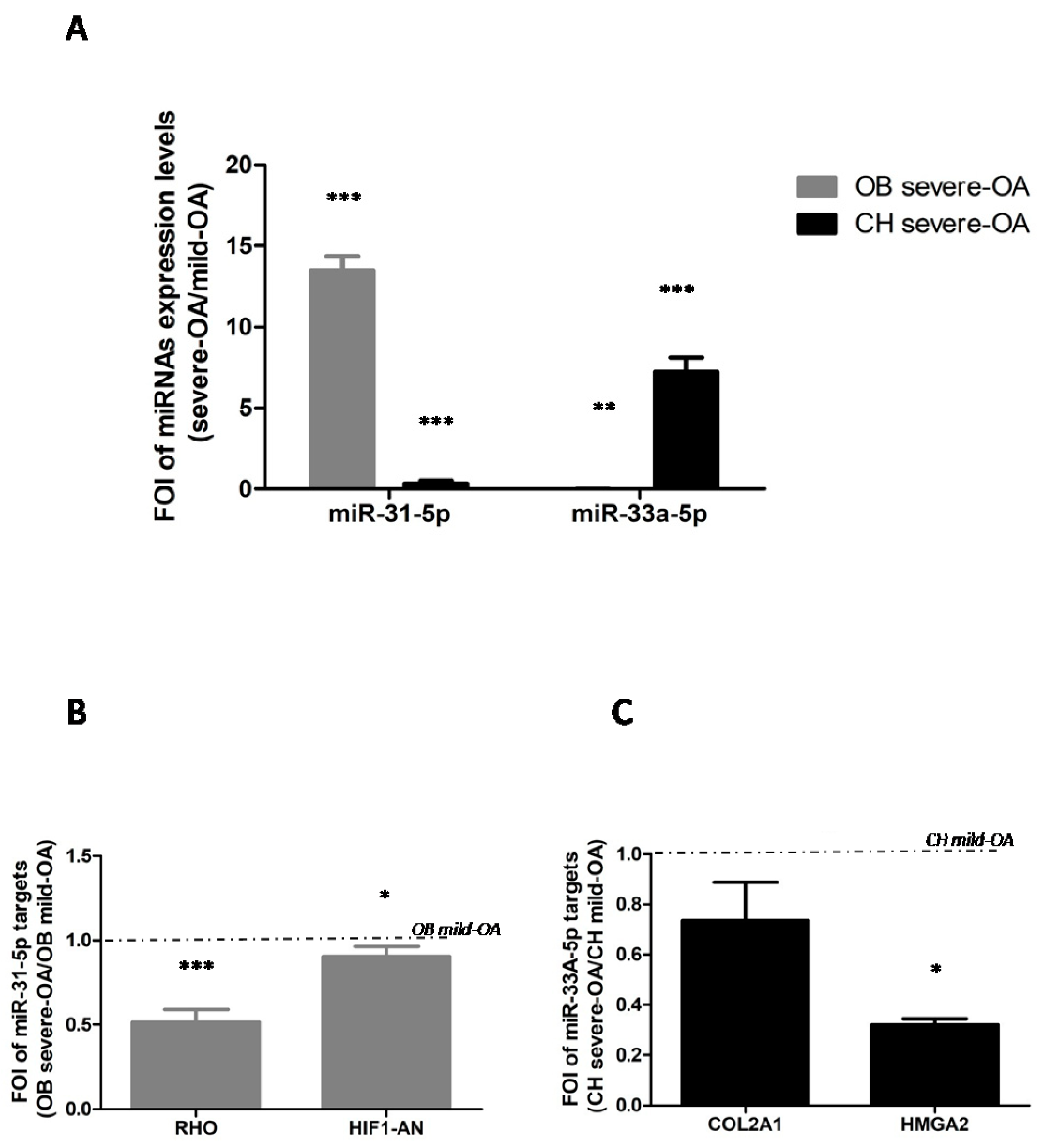 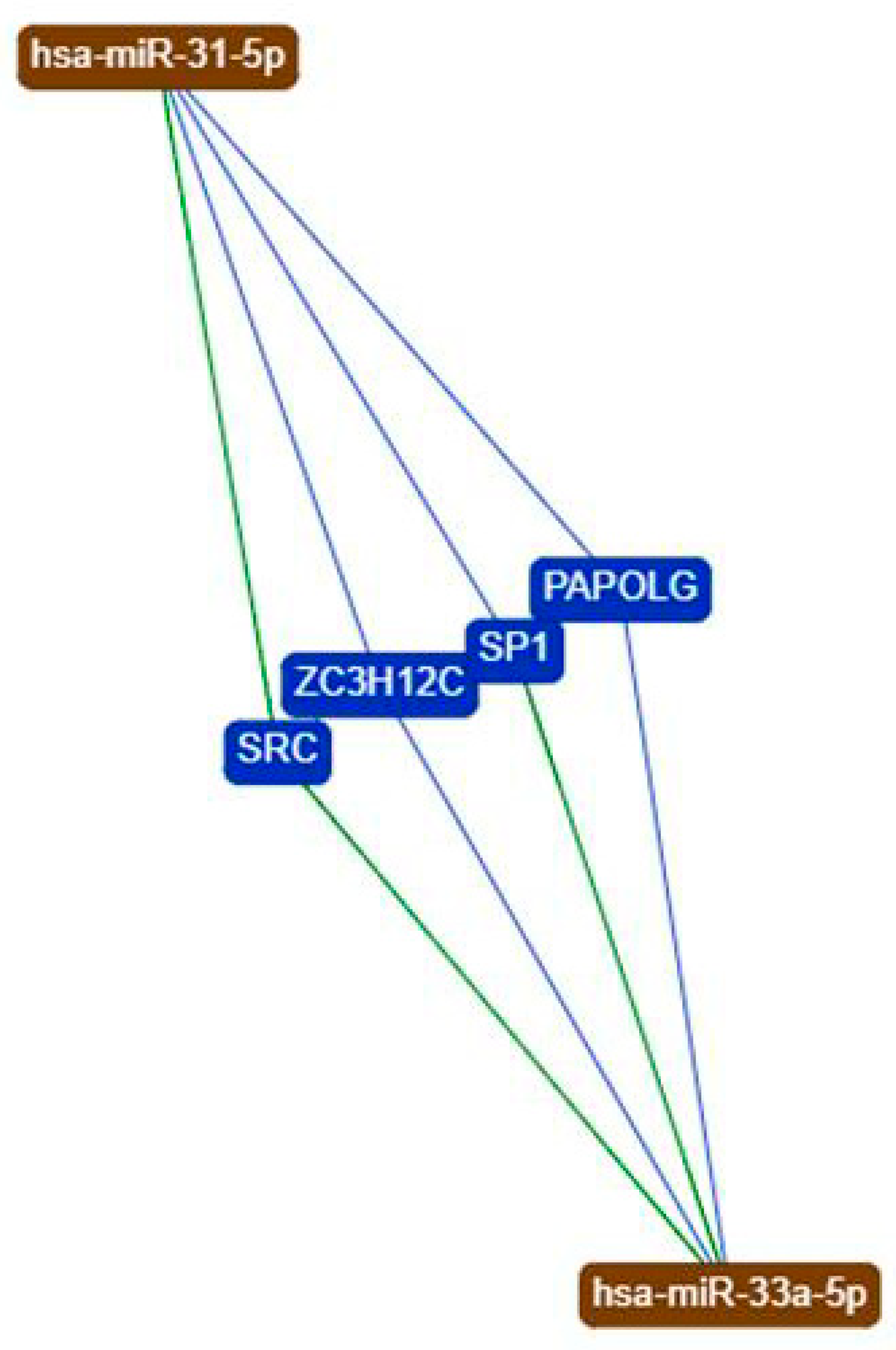 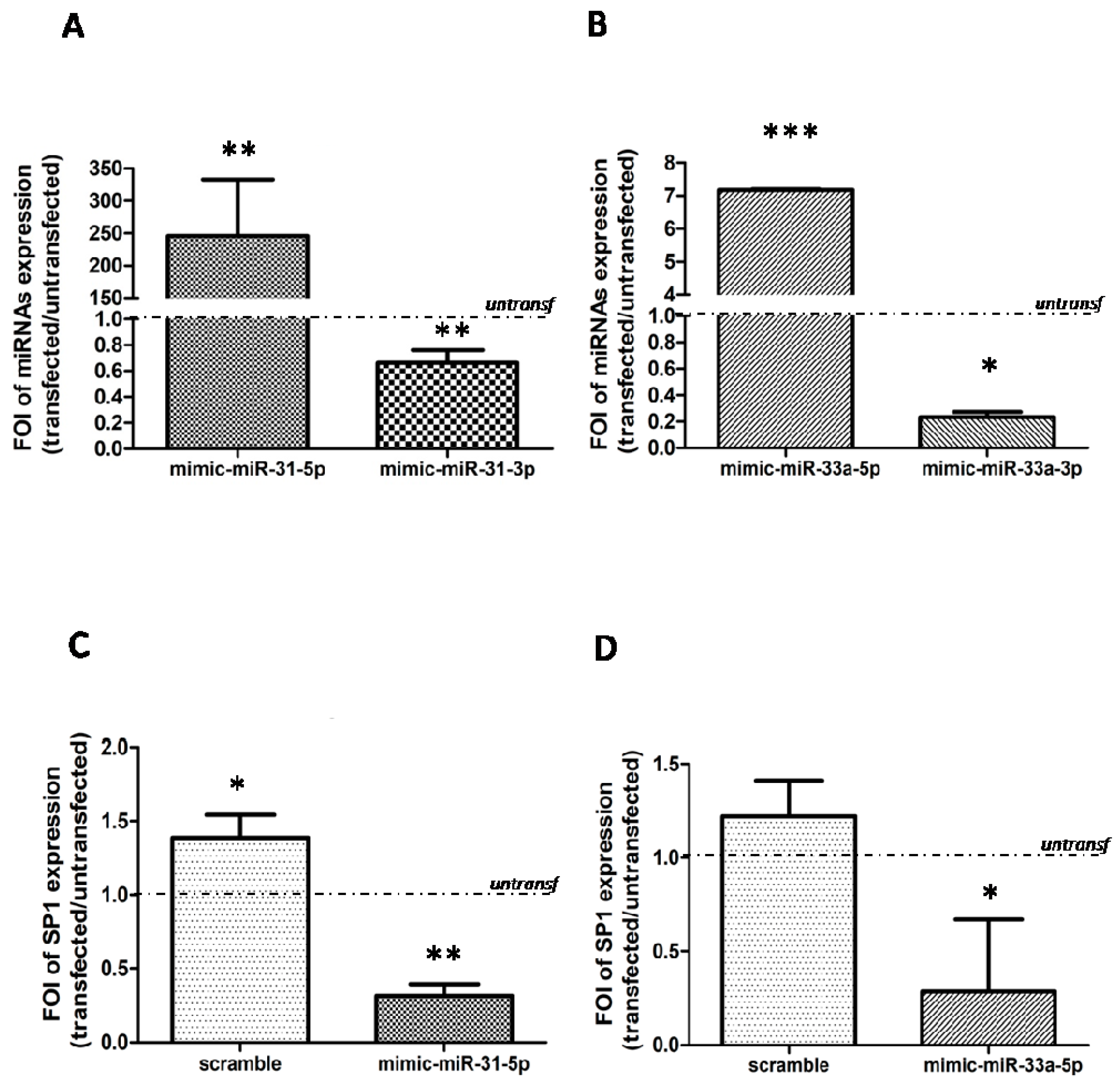 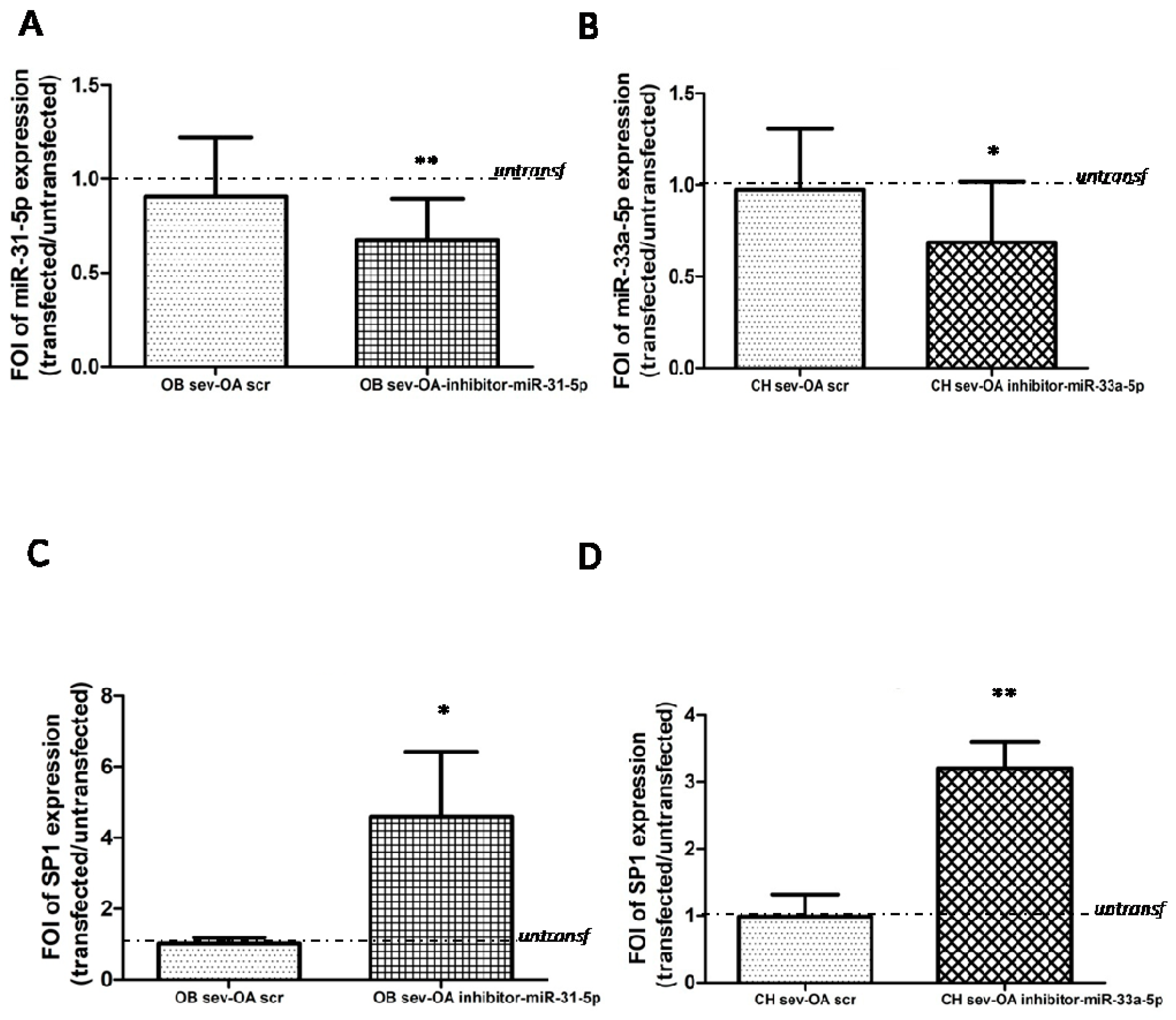