Preventive Effect of Canstatin against Ventricular Arrhythmia Induced by Ischemia/Reperfusion Injury: A Pilot Study
Next Article in Special Issue

Carboxypeptidase U (CPU, TAFIa, CPB2) in Thromboembolic Disease: What Do We Know Three Decades after Its Discovery?

Hereditary factor XIII (FXIII) deficiency is a rare autosomal bleeding disorder which can cause life-threatening bleeding. Acquired deficiency can be immune-mediated or due to increased consumption or reduced synthesis. The most commonly used screening test is insensitive, and widely used quantitative assays have analytical limitations. The present study sought to validate Technofluor FXIII Activity, the first isopeptidase-based assay available on a routine coagulation analyser, the Ceveron s100. Linearity was evidenced throughout the measuring range, with correlation coefficients of >0.99, and coefficients of variation for repeatability and reproducibility were <5% and <10%, respectively. A normally distributed reference range of 47.0–135.5 IU/dL was derived from 154 normal donors. Clinical samples with Technofluor FXIII Activity results between 0 and 167.0 IU/dL were assayed with Berichrom® FXIII Activity, a functional ammonia release assay, and the HemosIL™ FXIII antigen assay, generating correlations of 0.950 and 0.980, respectively. Experiments with a transglutaminase inhibitor showed that Technofluor FXIII Activity can detect inhibition of enzymatic activity. No interference was exhibited by high levels of haemolysis and lipaemia, and interference by bilirubin was evident at 18 mg/dL, a level commensurate with severe liver disease. Technofluor FXIII Activity is a rapid, accurate and precise assay suitable for routine diagnostic use with fewer interferents than ammonia release FXIII activity assays. View Full-Text
Keywords: automation; bleeding disorder; blood coagulation; clinical validation; diagnostic assay; factor XIII; isopeptidase; transglutaminase automation; bleeding disorder; blood coagulation; clinical validation; diagnostic assay; factor XIII; isopeptidase; transglutaminase
►▼ Show Figures 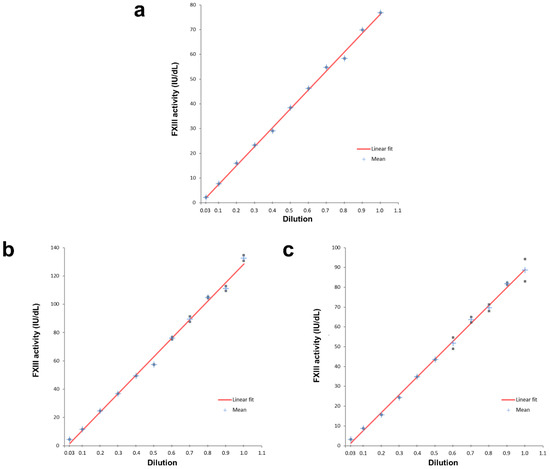