Effects of Mephedrone and Amphetamine Exposure during Adolescence on Spatial Memory in Adulthood: Behavioral and Neurochemical Analysis

A synthetic cathinone, mephedrone is widely abused by adolescents and young adults. Despite its widespread use, little is known regarding its long-term effects on cognitive function. Therefore, we assessed, for the first time, whether (A) repeated mephedrone (30 mg/kg, i.p., 10 days, once a day) exposure during adolescence (PND 40) induces deleterious effects on spatial memory and reversal learning (Barnes maze task) in adult (PND 71–84) rats and whether (B) these effects were comparable to amphetamine (2.5 mg/kg, i.p.). Furthermore, the influence of these drugs on MMP-9, NMDA receptor subunits (GluN1, GluN2A/2B) and PSD-95 protein expression were assessed in adult rats. The drug effects were evaluated at doses that per se induce rewarding/reinforcing effects in rats. Our results showed deficits in spatial memory (delayed effect of amphetamine) and reversal learning in adult rats that received mephedrone/amphetamine in adolescence. However, the reversal learning impairment may actually have been due to spatial learning rather than cognitive flexibility impairments. Furthermore, mephedrone, but not amphetamine, enhanced with delayed onset, MMP-9 levels in the prefrontal cortex and the hippocampus. Mephedrone given during adolescence induced changes in MMP-9 level and up-regulation of the GluN2B-containing NMDA receptor (prefrontal cortex and hippocampus) in young adult (PND 63) and adult (PND 87) rats. Finally, in adult rats, PSD-95 expression was increased in the prefrontal cortex and decreased in the hippocampus. In contrast, in adult rats exposed to amphetamine in adolescence, GluN2A subunit and PSD-95 expression were decreased (down-regulated) in the hippocampus. Thus, in mephedrone—but not amphetamine-treated rats, the deleterious effects on spatial memory were associated with changes in MMP-9 level. Because the GluN2B-containing NMDA receptor dominates in adolescence, mephedrone seems to induce more harmful effects on cognition than amphetamine does during this period of life. View Full-Text
Keywords: mephedrone; spatial memory; MMP-9; NMDA; young adult rats mephedrone; spatial memory; MMP-9; NMDA; young adult rats
►▼ Show Figures 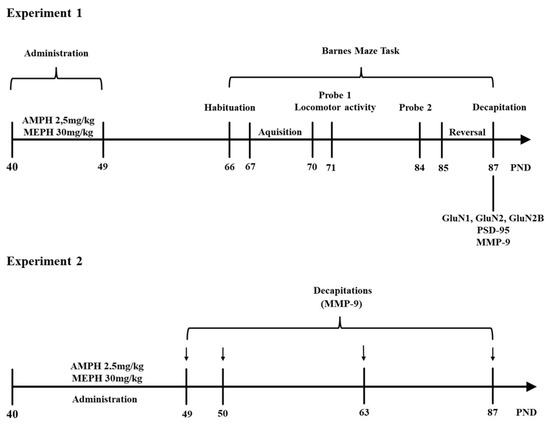