The goal of diabetes care is to achieve and maintain good glycemic control over time, so as to prevent or delay the development of micro- and macrovascular complications in type 1 (T1D) and type 2 diabetes (T2D). However, numerous barriers hinder the achievement of this goal, first of all the frequent episodes of hypoglycemia typical in patients treated with insulin as T1D patients, or sulphonylureas as T2D patients. The prevention strategy and treatment of hypoglycemia are important for the well-being of patients with diabetes. Hypoglycemia is strongly associated with an increased risk of cardiovascular disease in diabetic patients, due probably to the release of inflammatory markers and prothrombotic effects triggered by hypoglycemia. Treatment of hypoglycemia is traditionally based on administration of carbohydrates or of glucagon via intramuscular (IM) or subcutaneous injection (SC). The injection of traditional glucagon is cumbersome, such that glucagon is an under-utilized drug. In 1983, it was shown for the first time that intranasal (IN) glucagon increases blood glucose levels in healthy volunteers, and in 1989–1992 that IN glucagon is similar to IM glucagon in resolving hypoglycemia in normal volunteers and in patients with diabetes, both adults and children. IN glucagon was developed in 2010 and continued in 2015; in 2019 IN glucagon obtained approval in the US, Canada, and Europe for severe hypoglycemia in children and adults. In the 2010s, two ready-to-use injectable formulations, a stable non-aqueous glucagon solution and the glucagon analog dasiglucagon, were developed, showing an efficacy similar to traditional glucagon, and approved in the US in 2020 and in 2021, respectively, for severe hypoglycemia in adults and in children. Fast-acting glucagon (nasal administration and injected solutions) appears to represent a major breakthrough in the treatment of severe hypoglycemia in insulin-treated patients with diabetes, both adults and children. It is anticipated that the availability of fast-acting glucagon will expand the use of glucagon, improve overall metabolic control, and prevent hypoglycemia-related complications, in particular cardiovascular complications and cognitive impairment. View Full-Text
Keywords: glucagon; hypoglycemia; diabetes; T1D; T2D; nasal glucagon; dasiglucagon; stable non-aqueous injected glucagon; diabetic complications; glycemic control glucagon; hypoglycemia; diabetes; T1D; T2D; nasal glucagon; dasiglucagon; stable non-aqueous injected glucagon; diabetic complications; glycemic control
►▼ Show Figures 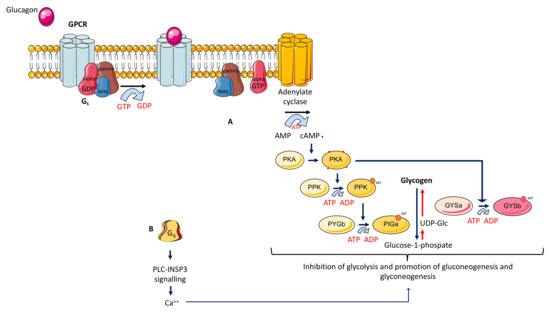