The YAP/TAZ Signaling Pathway in the Tumor Microenvironment and Carcinogenesis: Current Knowledge and Therapeutic Promises
Previous Article in Journal

Chronic pain (CP) is one of the most frequent and difficult-to-manage clinical entities in medical practice [1]. Multiple disorders featuring CP are the leading causes of disability worldwide, corresponding to a significant public health issues [2,3,4]; as well as marked reductions in quality of life related to restrictions of mobility and daily activities, anxiety, and depression [5,6]. Current pharmacological options for the treatment of CP are imperfect, including significant efficacy and tolerability issues [7]. In particular, opioid abuse has been linked to increasingly larger mortality rates in recent years, representing a large-scale epidemic [7,8].
These problems have invigorated neuropharmacological research on CP [9], centering on neuroinflammation as a therapeutic target [10]. Inflammation as a pathophysiologic component of pain has long been recognized in neural phenomena such as peripheral sensitization (PS), central sensitization (CS), and long-term spinal potentiation (LTP) [11]. Recent preclinical and clinical studies have described anti-nociceptive effects for specialized pro-resolving lipid mediators (SPMs), which derive from polyunsaturated fatty acids (PUFA) [12,13,14,15]. These molecules are important regulators of the balance between pro-inflammatory and anti-inflammatory substances, in addition, they might regulate the excessive sensitization of nociceptors after inhibiting specialized channels and thus achieving the suppression of pain [13]. In this way, SPMs would function as a bridge between the immune and nervous systems, and could be the future of CP therapy. The objective of this review is to describe the molecular pharmacological mechanisms through which SPMs act in CP, as well as summarize current preclinical and clinical evidence on SPMs as analgesic agents, serving as a novel approach to CP management.

This is a narrative review in which an extensive literature search was performed on Scopus, EMBASE, PubMed, ISI Web of Science, and Google Scholar databases, from inception to August 2021. The terms “Chronic pain”, “Neuroinflammation”, “specialized pro-resolving lipid mediators and chronic pain”, and “Chronic pain and nociception” were among the ones used throughout the search.

3.2. Specialized Pro-Resolving Lipids Mediators in the Neurobiology of Pain: Anti-Inflammatory and Analgesic Mechanisms

3.3. Preclinical and Clinical Evidence on Specialized Pro-Resolving Lipids Mediators in the Management of Pain

In light of the many mechanistic links between SPMs and the pathophysiology of CP, their potential for clinical use has become a key emergent object of research. Preclinical data underlines the efficacy of LX in various animal models of pain, including chronic post-ischemic pain (CPIP) [151], carrageenan-elicited pain (CEP) [127,152], bone cancer-induced pain (BCIP) [130], spinal cord injury (SCI) [15,129,153], chronic constriction injury (CCI) [154], chronic compression of the dorsal root ganglion (CCD) [155], and non-compressive lumbar disc herniation [128].
Notably, in a recent study by Liu et al., BML-111—an LXA4 receptor agonist—was used in rats with SCI, resulting in significantly lower levels of TNF-α, IL-1β, and IL-6 in serum and spinal cord tissue [129]. Sun et al. reported similar results in CCD models, where LXA4 reduced mechanical hypersensitivity in association with decreased TNF-α, IL1β, and IL-6 [155]. Treatment with LXA4 and LXB4 has also been described to reduce mechanical allodynia in rats with BCIP [130]; and LXA4, LXB4, and AT-LXA4 appear to reduce mechanical hypersensitivity in carrageenan-treated rats [127,152]. Besides, treatment with AT-LXA4 has been reported to decrease chronic morphine-induced thermal hyperalgesia by blocking NALP1-derived IL-1β levels in vivo and in vitro, pinpointing a promising pharmacological target for the treatment of pain [156].
Regarding SPMs derived from DPA and DHA, many studies have shown efficacy for RvD, PD, and MaR in animal models of pain, such as CCI [134], formalin-induced pain (FIP) [79,93,94,96], capsaicin-induced pain [89,93,94], complete Freund’s adjuvant (CFA)-induced pain [79,93,94,96,105], osteoarthritis pain [95], and CEP pain [79,93,100,152]. They may also intervene significantly in temporomandibular joint inflammatory pain [92], CPIP [151], chronic post-thoracotomy pain (CPTP) [120,157], post-operative pain induced by tibial bone fracture (PTBF) [133], herniation-induced radicular pain [158], chronic pancreatitis-induced visceral pain [104], and peripheral neuropathic pain induced by chemotherapy (PNPC) [114].
A study performed by Zhang et al. evaluated intravenous perioperative treatment with DHA (500 μg), RvD1 (500 ng), and MaR1 (500 ng) on a mouse model of PNPC, revealing efficacy for these alternatives in pain prevention and delay. They may also alleviate established pain, though this remains less clear [159]. Likewise, RvD2 has been reported to reduce heat hyperalgesia, mechanical allodynia, second-phase spontaneous pain, and thermal sensitization in FIP, CEP, capsaicin-induced pain, AITC, CFA, and fibromyalgia-like pain [94,160]. Conversely, Luo et al. did not find analgesic effects with intrathecal administration of RvD3 and RvD and reported a reduction in mechanical hyperalgesia with RvD5 treatment only in CIPN male mice [114].
Finally, RvE has also been found effective in animal models of CFA-induced inflammatory pain [79,161], FIP [37,161], CEP [79,161], CCI [123], and spinal nerve injury (SNI) [123]. Indeed, in an equivalent dose 1000 times lower than morphine, RvE1 appears to reduce second-phase spontaneous pain in FIP models [79]. Furthermore, in two studies, Xu et al. reported a decrease in mechanical allodynia, heat hyperalgesia, edema, neutrophil infiltration, and expression of pro-inflammatory cytokines and chemokines in diverse pain models treated with RvE1 [79,123]. This is notable, since RvE1 has been shown to be significantly increased by n-3 fatty acids supplementation in humans [162]. Even though effective in reducing inflammation, no robust analgesic effects have been described for RvE2 and RvE3 [163,164]. On the other hand, a phase 2 study examined the therapeutic effectivity of RX-10045, a synthetic analog of RvE1, in the treatment of eye inflammation and pain in cataract surgery [165].
Beyond mechanistic and animal studies, SPMs have also been tested as analgesics in humans with various pain-related conditions (Table 1), such as chronic headaches [166], migraines [167], joint discomfort [15,168], sickle cell disease [169], diabetic neuropathy [170], and various rheumatic diseases [15,171,172,173,174,175]. Firstly, supplementation with certain doses of ω-3 PUFAs appears to produce an increase in circulating anti-inflammatory mediators in humans [176]. For example, in a meta-analysis by Goldberg et al. [15] included 17 trials evaluating the pain-relieving effects of ω-3 PUFA in patients with rheumatoid arthritis or joint pain related to inflammatory bowel disease and dysmenorrhea. The researchers found that supplementation reduced patient-reported joint pain intensity (SMD: −0.26; 95% CI: –0.49 to −0.03, p = 0.03), minutes of morning stiffness (SMD: −0.43; 95% CI: −0.72 to −0.15, p = 0.003), number of painful and/or tender joints (SMD: −0.29; 95% CI: −0.48 to −0.10, p = 0.003), and NSAID use (SMD: −0.40; 95% CI: −0.72 to −0.08, p = 0.01).
Likewise, a 12-month, double-blind, controlled study compared daily supplementation with various doses of ω-3 PUFA, reporting significant improvement in patients’ global evaluation and physicians’ assessment of pain in those taking doses of 2.6 mg/day. This group also significantly reduced the use of anti-rheumatic medications [173]. Similarly, in a randomized, double-blind, placebo-controlled trial fish oil with ω-3 PUFA reduced symptoms of pain and stiffness significantly after nine weeks of treatment were observed [168]. In the “En Balance-Plus” study, an interventional study designed to assess the efficacy of dietary ω-3 PUFA in diabetic patients, significant reductions in pain-related neuropathy symptoms were reported after three months [170]. A randomized, parallel-group, 12-weeks trial with a diet high in ω-3 fatty acids and low in ω-6 PUFA demonstrated a reduction in pain frequency, intensity, and psychological distress in patients with chronic headaches [166]. Various other clinical trials have evaluated the use of PUFA in conditions such as pediatric sickle-cell anemia [177], post-traumatic headache [178], fibromyalgia [179], among others [180,181,182], with promising results. Although these effects may not be wholly attributed to SPM—with changes in sphingolipid metabolism also playing a purportedly significant part—their significance in this context is notable.

Currently, CP remains one of the most prevalent clinical entities in clinical medicine, related to a wide range of diseases. In response, in recent years there has been a search for novel alternatives for its management. SPMs stand out in this scenario as a group of bioactive lipids which play a fundamental role in the resolution of inflammation and can ameliorate CP through various mechanisms.
These molecules have immunomodulatory properties which can diminish inflammation associated with peripheral and central nociception. Abundant preclinical and clinical evidence supports the role of SPMs in neuroinflammation associated with CS and LTP, either through the modulation of microglia, the regulation of nociceptors, or the regulation of the neuronal pathways implicated in pain.
Nevertheless, further high-quality studies are necessary to better characterize the clinical utility of SPMs in CP, especially attending to the large variety of etiologies, pathophysiologic mechanisms, and clinical presentations that may be associated with this entity. Likewise, deeper research in this area would allow the assessment of adverse effects, tolerability and pharmacological interactions of SPMs. Continued investigation in this field is worthwhile, as SPMs could prove to be an invaluable treatment tool in the future. 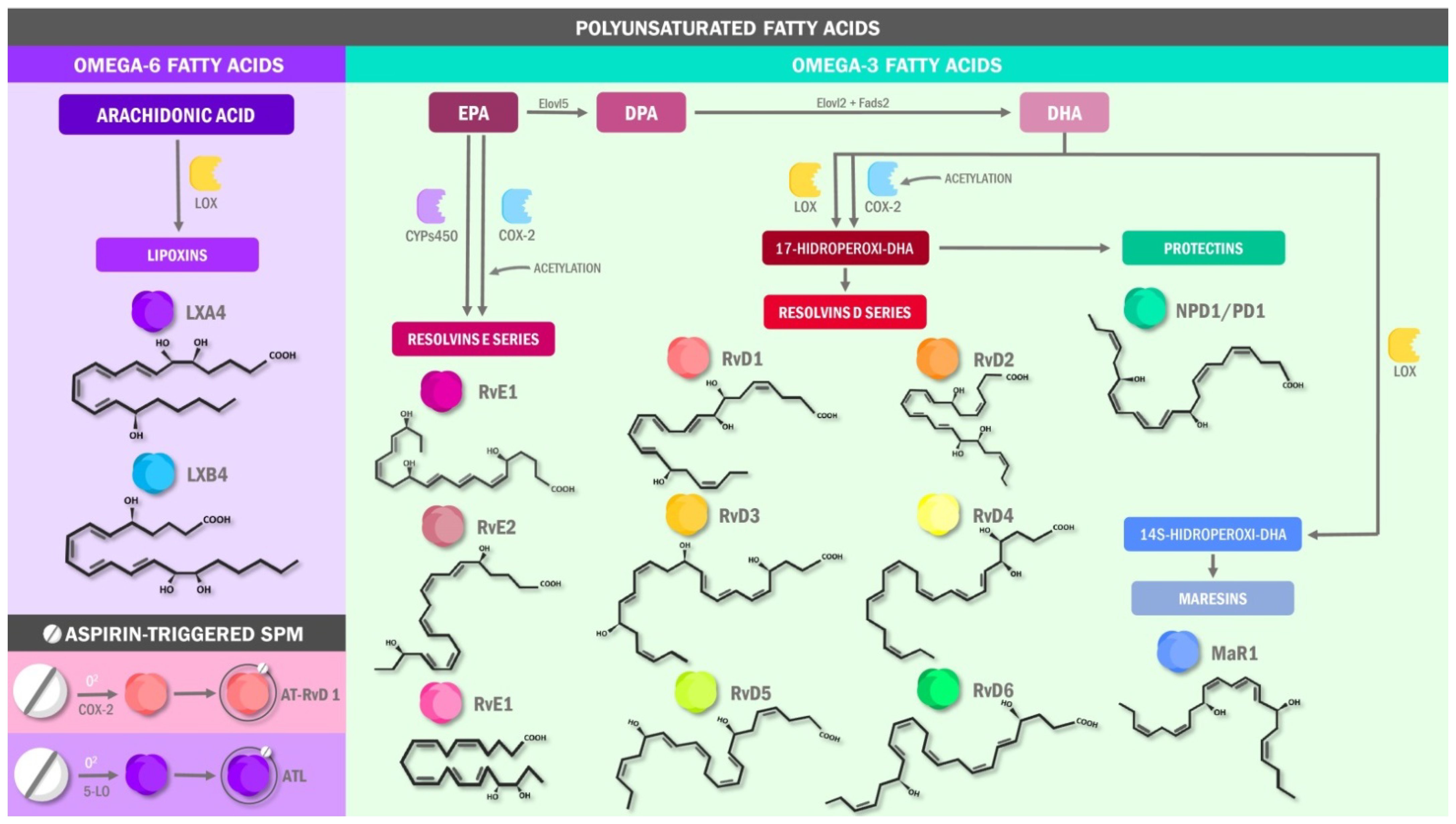