Bacteria of the genus Listeria (phylum Firmicutes) include both human and animal pathogens, as well as saprophytic strains. A common component of Listeria spp. genomes are plasmids, i.e., extrachromosomal replicons that contribute to gene flux in bacteria. This study provides an in-depth insight into the structure, diversity and evolution of plasmids occurring in Listeria strains inhabiting various environments under different anthropogenic pressures. Apart from the components of the conserved plasmid backbone (providing replication, stable maintenance and conjugational transfer functions), these replicons contain numerous adaptive genes possibly involved in: (i) resistance to antibiotics, heavy metals, metalloids and sanitizers, and (ii) responses to heat, oxidative, acid and high salinity stressors. Their genomes are also enriched by numerous transposable elements, which have influenced the plasmid architecture. The plasmidome of Listeria is dominated by a group of related replicons encoding the RepA replication initiation protein. Detailed comparative analyses provide valuable data on the level of conservation of these replicons and their role in shaping the structure of the Listeria pangenome, as well as their relationship to plasmids of other genera of Firmicutes, which demonstrates the range and direction of flow of genetic information in this important group of bacteria. View Full-Text
Keywords: Listeria; plasmids; adaptation; heavy metal resistance; plasmidome; pangenome; Firmicutes; horizontal gene transfer Listeria; plasmids; adaptation; heavy metal resistance; plasmidome; pangenome; Firmicutes; horizontal gene transfer
►▼ Show Figures 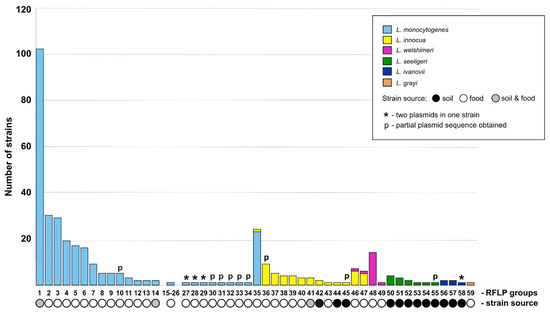