Xenogeneic biomaterials Cerbone® and OsteoBiol® are widely used in oral implantology. In dental practice, xenogeneic biomaterial is usually combined with autologous bone to provide bone volume stability needed for long-term dental implants. Magnesium alloy implants dissolve and form mineral corrosion layer that is directly in contact with bone tissue, allowing deposition of the newly formed bone. CSBD heals by intramembranous ossification and therefore is a convenient model for analyses of ostoconductive and osteoinductive properties of different type of biomaterials. Magnesium alloy-enriched biomaterials have not yet been applied in oral implantology. Therefore, the aim of the current study was to investigate biological properties of potentially new bovine xenogeneic biomaterial enriched with magnesium alloy in a 5 mm CSBD model. Osteoconductive properties of Cerabone®, Cerabone® + Al. bone, and OsteoBiol® were also analyzed. Dynamics of bone healing was followed up on the days 3, 7, 15, 21, and 30. Calvary bone samples were analyzed by micro-CT, and values of the bone morphometric parameters were assessed. Bone samples were further processed for histological and immunohistochemical analyses. Histological observation revealed CSBD closure at day 30 of the given xenogeneic biomaterial groups, with the exception of the control group. TNF-α showed high intensity of expression at the sites of MSC clusters that underwent ossification. Osx was expressed in pre-osteoblasts, which were differentiated into mature osteoblasts and osteocytes. Results of the micro-CT analyses showed linear increase in bone volume of all xenogeneic biomaterial groups and also in the control. The highest average values of bone volume were found for the Cerabone® + Mg group. In addition, less residual biomaterial was estimated in the Cerabone® + Mg group than in the Cerabone® group, indicating its better biodegradation during CSBD healing. Overall, the magnesium alloy xenogeneic biomaterial demonstrated key properties of osteoinduction and biodegradidibility during CSBD healing, which is the reason why it should be recommended for application in clinical practice of oral implantology. View Full-Text
Keywords: CSBD; cerabone; magnesium alloy; bone regeneration; osteoconduction CSBD; cerabone; magnesium alloy; bone regeneration; osteoconduction
►▼ Show Figures 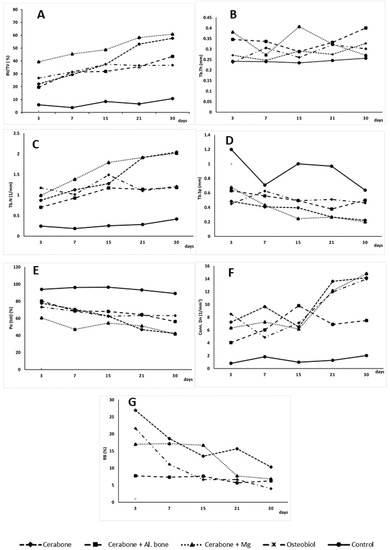