Copper, Iron, and Manganese Toxicity in Neuropsychiatric Conditions
Next Article in Special Issue

Monocarbonyl Analogs of Curcumin Based on the Pseudopelletierine Scaffold: Synthesis and Anti-Inflammatory Activity
Previous Article in Journal

New, tricyclic compounds containing a sulfonyl moiety in their structure, as potential safer COX inhibitors, were designed and synthesized. New derivatives have three conjugated rings and a sulfonyl group. A third ring, i.e., an oxazine, oxazepine or oxazocin, has been added to the 1,2-benzothiazine skeleton. Their anti-COX-1/COX-2 and cytotoxic effects in vitro on NHDF cells, together with the ability to interact with model membranes and the influence on reactive oxygen species and nitric oxide, were studied. Additionally, a molecular docking study was performed to understand the binding interaction of the compounds with the active site of cyclooxygenases. For the abovementioned biological evaluation of new tricyclic 1,2-benzothiazine derivatives, the following techniques and procedures were employed: the differential scanning calorimetry, the COX colorimetric inhibitor screening assay, the MTT, DCF-DA and Griess assays. All of the compounds studied demonstrated preferential inhibition of COX-2 compared to COX-1. Moreover, all the examined tricyclic 1,2-thiazine derivatives interacted with the phospholipid model membranes. Finally, they neither have cytotoxic potency, nor demonstrate significant influence on the level of reactive oxygen species or nitric oxide. Overall, the tricyclic 1,2-thiazine derivatives are good starting points for future pharmacological tests as a group of new anti-inflammatory agents. View Full-Text
Keywords: synthesis; tricyclic compounds; 1,2-thiazine; cyclooxygenase inhibition; model membrane; DSC; molecular docking synthesis; tricyclic compounds; 1,2-thiazine; cyclooxygenase inhibition; model membrane; DSC; molecular docking
►▼ Show Figures 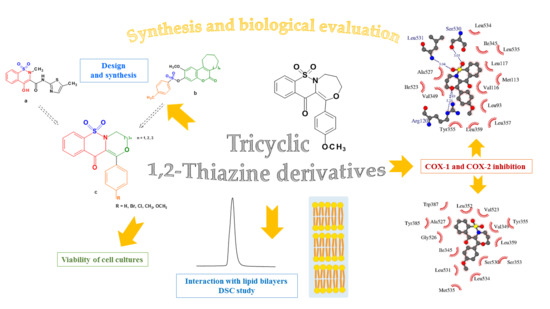 Jadwiga Maniewska
Jadwiga Maniewska graduated from the Faculty of Pharmacy, Wroclaw Medical University, in 2005. She started her research career from studying flavonoids (multidrug resistance modulators) interactions with model membranes at the Department of Biophysics, Faculty of Medicine, at the same university where she was also awarded a PhD in 2010. In 2015, following her postdoctoral training, Dr. Maniewska became an assistant professor at the Department of Medicinal Chemistry, Faculty of Pharmacy. Her research interests include new drug-like compounds—potential non-steroidal anti-inflammatory drugs—their design and physicochemical properties, together with their interactions with model lipid membranes. Jadwiga Maniewska is a member of the Polish Society of Medicinal Chemistry.
Zoom | Orient | As Lines | As Sticks | As Cartoon | As Surface | Previous Scene | Next Scene
We use cookies on our website to ensure you get the best experience. Read more about our cookies here.
Accept
We have just recently launched a new version of our website. Help us to further improve by taking part in this short 5 minute survey here. here.
Never show this again