Satellitome Analysis of Rhodnius prolixus, One of the Main Chagas Disease Vector Species

Several features already qualified the invasive bivalve species Crassostrea gigas as a valuable non-standard model organism in genome research. C. gigas is characterized by the low contribution of satellite DNAs (satDNAs) vs. mobile elements and has an extremely low amount of heterochromatin, predominantly built of DNA transposons. In this work, we have identified 52 satDNAs composing the satellitome of C. gigas and constituting about 6.33% of the genome. Satellitome analysis reveals unusual, highly scattered organization of relatively short satDNA arrays across the whole genome. However, peculiar chromosomal distribution and densities are specific for each satDNA. The inspection of the organizational forms of the 11 most abundant satDNAs shows association with constitutive parts of Helitron mobile elements. Nine of the inspected satDNAs are dominantly found in mobile element-associated form, two mostly appear standalone, and only one is present exclusively as Helitron-associated sequence. The Helitron-related satDNAs appear in more chromosomes than other satDNAs, indicating that these mobile elements could be leading satDNA propagation in C. gigas. No significant accumulation of satDNAs on certain chromosomal positions was detected in C. gigas, thus establishing a novel pattern of satDNA organization on the genome level. View Full-Text
Keywords: satellite DNA; satellitome; mobile element; Helitron; bivalve; Crassostrea gigas satellite DNA; satellitome; mobile element; Helitron; bivalve; Crassostrea gigas
►▼ Show Figures 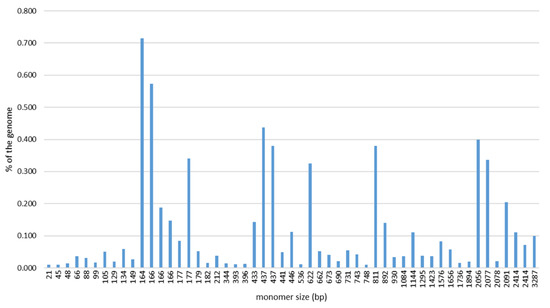