Nikolay A. Riger
1 and

We studied the effects of the addition of large neutral amino acids, such as tyrosine (Tyr) and tryptophan (Trp), in mice DBA/2J and tetrahybrid mice DBCB receiving a high-fat, high-carbohydrate diet (HFCD) for 65 days. The locomotor activity, anxiety, muscle tone, mass of internal organs, liver morphology, adipokines, cytokines, and biochemical indices of animals were assessed. The Tyr supplementation potentiated increased anxiety in EPM and contributed to a muscle tone increase, a decrease in the AST/ALT ratio, and an increase in protein anabolism in both mice strains. Tyr contributed to a decrease in liver fatty degeneration and ALT reduction only in DBCB that were sensitive to the development of obesity. The addition of Trp caused an increase in muscle tone and potentiated an increase in anxiety with age in animals of both genotypes. Trp had toxic effects on the livers of mice, which was manifested in increased fatty degeneration in DBCB, edema, and the appearance of micronuclei in DBA/2J. The main identified effects of Tyr on mice are considered in the light of its modulating effect on the dopamine neurotransmitter metabolism, while for the Trp supplement, effects were presumably associated with the synthesis of its toxic metabolites by representatives of the intestinal microflora. View Full-Text
Keywords: obesity; mice; tyrosine; tryptophan; cytokines; behavior; cytokines; inflammation; liver morphology obesity; mice; tyrosine; tryptophan; cytokines; behavior; cytokines; inflammation; liver morphology
►▼ Show Figures 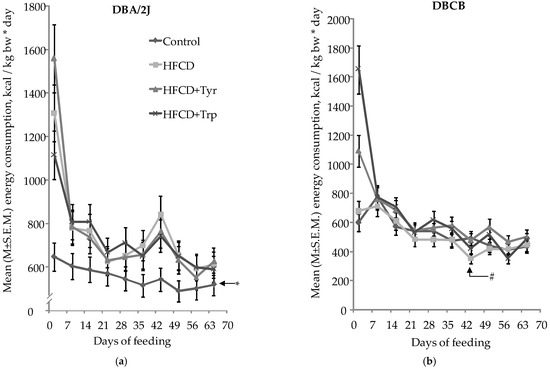