Fusarium circinatum causes one of the most important diseases of conifers worldwide, the pine pitch canker (PPC). However, no effective field intervention measures aiming to control or eradicate PPC are available. Due to the variation in host genetic resistance, the development of resistant varieties is postulated as a viable and promising strategy. By using an integrated approach, this study aimed to identify differences in the molecular responses and physiological traits of the highly susceptible Pinus radiata and the highly resistant Pinus pinea to F. circinatum at an early stage of infection. Dual RNA-Seq analysis also allowed to evaluate pathogen behavior when infecting each pine species. No significant changes in the physiological analysis were found upon pathogen infection, although transcriptional reprogramming was observed mainly in the resistant species. The transcriptome profiling of P. pinea revealed an early perception of the pathogen infection together with a strong and coordinated defense activation through the reinforcement and lignification of the cell wall, the antioxidant activity, the induction of PR genes, and the biosynthesis of defense hormones. On the contrary, P. radiata had a weaker response, possibly due to impaired perception of the fungal infection that led to a reduced downstream defense signaling. Fusarium circinatum showed a different transcriptomic profile depending on the pine species being infected. While in P. pinea, the pathogen focused on the degradation of plant cell walls, active uptake of the plant nutrients was showed in P. radiata. These findings present useful knowledge for the development of breeding programs to manage PPC. View Full-Text
Keywords: dual RNA-Seq; Fusarium circinatum; Pinus pinea; Pinus radiata; host-pathogen interaction; conifer defense; disease differential susceptibility dual RNA-Seq; Fusarium circinatum; Pinus pinea; Pinus radiata; host-pathogen interaction; conifer defense; disease differential susceptibility
►▼ Show Figures 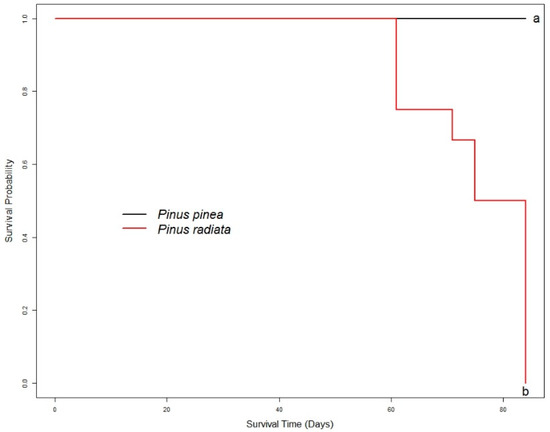