In order to support uncontrolled proliferation, cancer cells need to adapt to increased energetic and biosynthetic requirements. One such adjustment is aerobic glycolysis or the Warburg effect. It is characterized by increased glucose uptake and lactate production. Curcumin, a natural compound, has been shown to interact with multiple molecules and signaling pathways in cancer cells, including those relevant for cell metabolism. The effect of curcumin and its solvent, ethanol, was explored on four different cancer cell lines, in which the Warburg effect varied. Vital cellular parameters (proliferation, viability) were measured along with the glucose consumption and lactate production. The transcripts of pyruvate kinase 1 and 2 (PKM1, PKM2), serine hydroxymethyltransferase 2 (SHMT2) and phosphoglycerate dehydrogenase (PHGDH) were quantified with RT-qPCR. The amount and intracellular localization of PKM1, PKM2 and signal transducer and activator of transcription 3 (STAT3) proteins were analyzed by Western blot. The response to ethanol and curcumin seemed to be cell-type specific, with respect to all parameters analyzed. High sensitivity to curcumin was present in the cell lines originating from head and neck squamous cell carcinomas: FaDu, Detroit 562 and, especially, Cal27. Very low sensitivity was observed in the colon adenocarcinoma-originating HT-29 cell line, which retained, after exposure to curcumin, a higher levels of lactate production despite decreased glucose consumption. The effects of ethanol were significant. View Full-Text
Keywords: PKM1; PKM2; SHMT2; PHGDH; STAT3; serine; intracellular localization; ethanol PKM1; PKM2; SHMT2; PHGDH; STAT3; serine; intracellular localization; ethanol
►▼ Show Figures 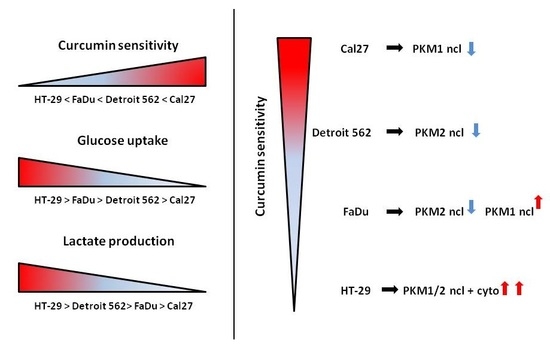