Most bones of the human body form and heal through endochondral ossification, whereby hypertrophic cartilage (HyC) is formed and subsequently remodeled into bone. We previously demonstrated that HyC can be engineered from human mesenchymal stromal cells (hMSC), and subsequently devitalized by apoptosis induction. The resulting extracellular matrix (ECM) tissue retained osteoinductive properties, leading to ectopic bone formation. In this study, we aimed at engineering and devitalizing upscaled quantities of HyC ECM within a perfusion bioreactor, followed by in vivo assessment in an orthotopic bone repair model. We hypothesized that the devitalized HyC ECM would outperform a clinical product currently used for bone reconstructive surgery. Human MSC were genetically engineered with a gene cassette enabling apoptosis induction upon addition of an adjuvant. Engineered hMSC were seeded, differentiated, and devitalized within a perfusion bioreactor. The resulting HyC ECM was subsequently implanted in a 10-mm rabbit calvarial defect model, with processed human bone (Maxgraft®) as control. Human MSC cultured in the perfusion bioreactor generated a homogenous HyC ECM and were efficiently induced towards apoptosis. Following six weeks of in vivo implantation, microcomputed tomography and histological analyses of the defects revealed an increased bone formation in the defects filled with HyC ECM as compared to Maxgraft®. This work demonstrates the suitability of engineered devitalized HyC ECM as a bone substitute material, with a performance superior to a state-of-the-art commercial graft. Streamlined generation of the devitalized tissue transplant within a perfusion bioreactor is relevant towards standardized and automated manufacturing of a clinical product. View Full-Text
Keywords: apoptosis; bioreactors; bone repair; endochondral ossification; hypertrophic cartilage; regenerative medicine apoptosis; bioreactors; bone repair; endochondral ossification; hypertrophic cartilage; regenerative medicine
►▼ Show Figures 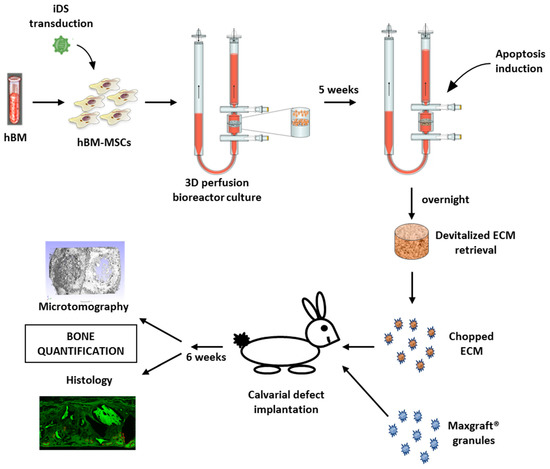