Obstacles against the Marketing of Curcumin as a Drug

Among the extensive public and scientific interest in the use of phytochemicals to prevent or treat human diseases in recent years, natural compounds have been highly investigated to elucidate their therapeutic effect on chronic human diseases including cancer, cardiovascular disease, and neurodegenerative disease. Curcumin, an active principle of the perennial herb Curcuma longa, has attracted an increasing research interest over the last half-century due to its diversity of molecular targets, including transcription factors, enzymes, protein kinases, growth factors, inflammatory cytokines, receptors, and it’s interesting pharmacological activities. Despite that, the clinical effectiveness of the native curcumin is weak, owing to its low bioavailability and rapid metabolism. Preclinical data obtained from animal models and phase I clinical studies done in human volunteers confirmed a small amount of intestinal absorption, hepatic first pass effect, and some degree of intestinal metabolism, might explain its poor systemic availability when it is given via the oral route. During the last decade, researchers have attempted with new pharmaceutical methods such as nanoparticles, liposomes, micelles, solid dispersions, emulsions, and microspheres to improve the bioavailability of curcumin. As a result, a significant number of bioavailable curcumin-based formulations were introduced with a varying range of enhanced bioavailability. This manuscript critically reviews the available scientific evidence on the basic and clinical effects and molecular targets of curcumin. We also discuss its pharmacokinetic and problems for marketing curcumin as a drug. View Full-Text
Keywords: curcumin; pharmacokinetic; bioavailability; marketing curcumin; pharmacokinetic; bioavailability; marketing
►▼ Show Figures 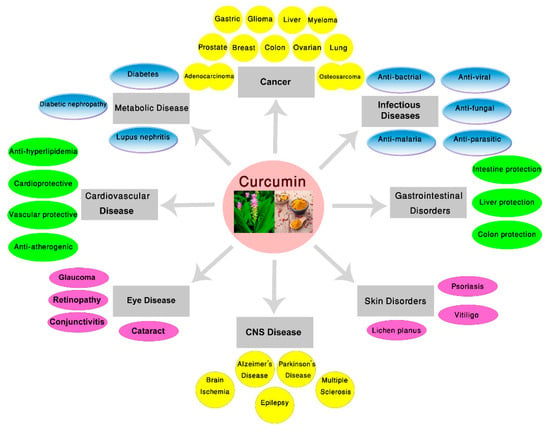