:
Cell death can be broadly characterized as either necrosis or apoptosis, depending on the morphological and biochemical features of the cell itself. We have previously reported that the treatment of mouse mammary carcinoma FM3A cells with the anticancer drug floxuridine (FUdR) induces necrosis in the original clone F28-7 but apoptosis in the variant F28-7-A. We have identified regulators, including heat shock protein 90, lamin-B1, cytokeratin-19, and activating transcription factor 3, of cell death mechanisms by using comprehensive gene and protein expression analyses and a phenotype-screening approach. We also observed that the individual inhibition or knockdown of the identified regulators in F28-7 results in a shift from necrotic to apoptotic morphology. Furthermore, we investigated microRNA (miRNA, miR) expression profiles in sister cell strains F28-7 and F28-7-A using miRNA microarray analyses. We found that several unique miRNAs, miR-351-5p and miR-743a-3p, were expressed at higher levels in F28-7-A than in F28-7. Higher expression of these miRNAs in F28-7 induced by transfecting miR mimics resulted in a switch in the mode of cell death from necrosis to apoptosis. Our findings suggest that the identified cell death regulators may play key roles in the decision of cell death mechanism: necrosis or apoptosis.
Keywords:
necrosis; apoptosis; transcriptome analysis; proteome analysis; microRNA; cell death regulator

The cell death mechanisms have become an extremely important research subject for understanding the cell survival and cell proliferation of cancer. Cell death can be broadly characterized as either necrotic or apoptotic, depending on the morphological, and biochemical features of the cell itself [1,2,3]. Previous studies have reported various types of cell death mode, including apoptosis, necroptosis, pathanatos, programmed necrosis, and necrosis [1,2,3,4,5]. Apoptotic cells shrink, form cell fragments called apoptotic bodies, and are phagocytosed by phagocytes in vivo. Cancer cells regress or disappear following apoptosis induced by treatment with anticancer drugs or radiation. Conversely, necrosis causes the swelling of cells and inflammation of neighboring cells, leading to the leakage of cell contents into the extracellular space. Necrosis is recognized as a side effect of cancer treatments with anticancer agents and radiation. In addition, necrosis in the tumor microenvironment generally contributes to resistance to treatment with anticancer drugs and radiation and causes hemorrhage and edema from the tumor tissue [6,7,8]. The incidence of necrosis has become an important clinical problem in cancer treatment.
We hypothesize that there is a mechanistic switch that determines whether a particular stimulus induces cell death via necrosis or apoptosis. We have established a cell model in which either necrosis or apoptosis can be induced via treatment with identical concentrations of the same drug. Moreover, we have compiled available research on the mechanisms of cell death and switching between necrosis and apoptosis. In this review, we outline the characteristics of these two types of cell death, the cellular models to study the mechanism of switching between them, the search for molecular regulators and their functional analysis, and the strategies targeting these regulators to treat cancers.

We have previously established a mouse mammary tumor FM3A cell line F28-7 that undergoes necrosis when treated with the anticancer drug floxuridine (FUdR) (1 μM) (Figure 1a) and a sub-clone variant F28-7-A cell line that spontaneously undergoes apoptosis when treated with the same concentration of FUdR [9]. FUdR suppresses DNA synthesis by inhibiting thymidylate synthase [10,11]. The concentration at which 50% of cells were effected (EC50) was 1 nM in F28-7 and F28-7-A cells [9,12]. Originally, FM3A cells underwent necrosis following FUdR treatment, but when a subculture was continued, cells with different properties emerged, including those that underwent apoptosis upon FUdR treatment. We established two sub-clone variants of F28-7 cells: one that underwent necrosis and another that underwent apoptosis (F28-7-A cells) by limiting dilution [9]. Figure 1b presents the morphology of cell death of F28-7 and F28-7-A cells following treatment with FUdR. In F28-7 cells, the swelling of nuclei and cells characteristic of necrosis was observed following FUdR treatment. Conversely, in F28-7-A cells, apoptotic bodies were found. In addition, DNA fragmentation of oligonucleosome units specific to apoptosis was also detected. Furthermore, the release of cytochrome c from the mitochondria was also confirmed. From the above, it was concluded that F28-7 cells undergo necrosis and F28-7-A cells undergo apoptosis following the action of FUdR. Table 1 presents the characteristics of necrotic and apoptotic cell death in these two cell sublines. The establishment of a unique cell line that shifts the mechanism of cell death without artificial gene manipulation is extremely rare, suggesting that there is a mechanism by which cell death switches from necrosis to apoptosis. Moreover, by using these two cell lines, it is possible to screen for cell death regulators that determine the pathway of necrosis or apoptosis in response to several stimuli and to analyze the cell death-switching mechanism.

As described above, the cell death regulators of the switch between necrosis and apoptosis in cancer cells could be identified using this cell death model. Necrosis causes hemorrhage and edema in tumor tissue, which are also side effects of anticancer medicine and radiation treatment [6,7,8]. In addition, necrotic cell death at the core of the tumor microenvironment promotes resistance to anticancer drugs and radiotherapy [6,7,8]. Moreover, it can protect cancer stem cells. Therefore, we consider the cell death switching from necrosis to apoptosis in cancer cells as a promising anticancer strategy. We suggest that HSP90, which regulates the expression of cell death regulators lamin-B1, cytokeratin-19, and ATF3, plays a significant role in the regulation of tumor necrosis. HSP90 is a potential anticancer drug target, and numerous drug candidates have been developed to inhibit its function [52,53,54], including GA analogs tanespimycin (17-AAG, 17-allylamino-17-demethoxy-geldanamycin) and alvespimycin (17-DMAG, 17-dimethylaminoethylamino-17-demethoxy-geldanamycin) [52,53]. These first line inhibitors have entered clinical trials for antitumor chemotherapy. Figure 3 shows the chemical structures of benzoquinone ansamycin HSP90 inhibitors, GA, 17-AAG, and 17-DMAG. These GA analog HSP90 inhibitors, tanespimycin and alvespimycin, have been reported to enhance binding affinity and anticancer efficacy as compared to GA [52,54,55,56]. In particular, tanespimycin represents one of the most studied HSP90 inhibitors with anticancer effects in various cancer cell models and in several clinical trials. In addition, other synthesized, small molecule inhibitors of HSP90, i.e., IPI-493 (tanespimycin metabolite), IPI-504 (retaspimycin hydrochloride), NVP-AUY922, AT13387, XL888, BIIB021, and PU-H71, have been studied by various clinical trials [52,54]. However, these HSP90 inhibitors demonstrated only moderate therapeutic efficacy when used in monotherapy [52,54]. Several studies have previously indicated that the HSP90 inhibitors are more effective in combination with several conventional therapies, i.e., chemotherapy, immunotherapy, and radiotherapy in experimental and clinical research [52,54].
Several previous studies have reported the important roles of HSP90 in TNF-induced necrosis and necroptosis. Inhibition of HSP90 function resulted in the degradation of death domain kinase, receptor-interacting protein (RIP), and the blockage of TNF-induced nuclear factor-κB activation [33]. Berghe et al. reported that inhibition of HSP90 function reverts TNF-induced necrosis to apoptosis [57], suggesting that HSP90 is crucial for cells to undergo necrotic cell death. In addition, Li et al. demonstrated that HSP90 and CDC37 cochaperone complex is required for RIP3 activation and the induction of TNF-α induced necroptosis [58]. Indeed, HSP90 inhibitors, GA, 17-AAG, and 17-DMAG, efficiently block TNF-α induced necroptosis by preventing RIP3 activation [58]. Furthermore, the activity of HSP90 modulates the stability of mixed lineage kinase domain-like protein and its oligomerization and translocation to the plasma membrane in TNF-induced necroptosis [59,60]. Interestingly, the disruption of HSP90 function prevents TNF-induced necroptosis in several models [58,59,60]. Notably, Li et al. reported that the administration of the HSP90 inhibitor 17-DMAG suppresses TNF-α induced systemic inflammatory response syndrome in a rat model [58]. These findings indicate the potential of HSP90 inhibitors as therapeutics for necrosis and necroptosis-related diseases. We propose that HSP90 inhibitors as adjuvants have the potential to effectively utilize the anticancer strategy of targeting the necrosis to apoptosis switching mechanism in the necrotic tumor microenvironment.
Moreover, we consider that miRNA can potentially control the switch from necrosis to apoptosis tumors. We identified miR-351-5p and miR-743a-3p as cell death regulators of necrosis and apoptosis [49]. In addition, we revealed that several miRNAs were dramatically altered in necrosis and apoptosis using these cell death models [49]. miRNA can modulate the post-transcriptional expression of dozens to hundreds of target genes, and miRNAs have been reported to be associated with various diseases, including cancer [43,44,45]. In the cancer research area, several miRNAs are used as tumor biomarkers and are being developed as targets for nucleic acid therapies [61,62]. We propose that necrosis- and apoptosis-regulated miRNAs are potentially effective targets of the unique anticancer strategy described.

We described the identification of five new regulators of cell death using a novel cell death model: the molecular chaperone HSP90, the nuclear scaffold protein lamin-B1, the cytoplasmic scaffold protein cytokeratin-19, the transcription factor ATF3, and the miRNAs miR-351-5p and miR-743a-3p. We further investigated the gene mutation of cell death regulators in necrosis and apoptosis via whole-exome sequencing analysis. In addition, we studied the whole leakage proteins, namely, secretome, of FUdR-induced necrosis and apoptosis via a shotgun proteomic approach. In the future, we will continue to elucidate the entire mechanism of switching between the modes of necrosis and apoptosis in human normal and cancer cells. These findings may lead to the development of new anticancer drugs that target cell death regulators, e.g., HSP90, lamin-B1, cytokeratin-19, ATF3, and miRNAs, which are involved in the switching mechanism from necrosis to apoptosis. 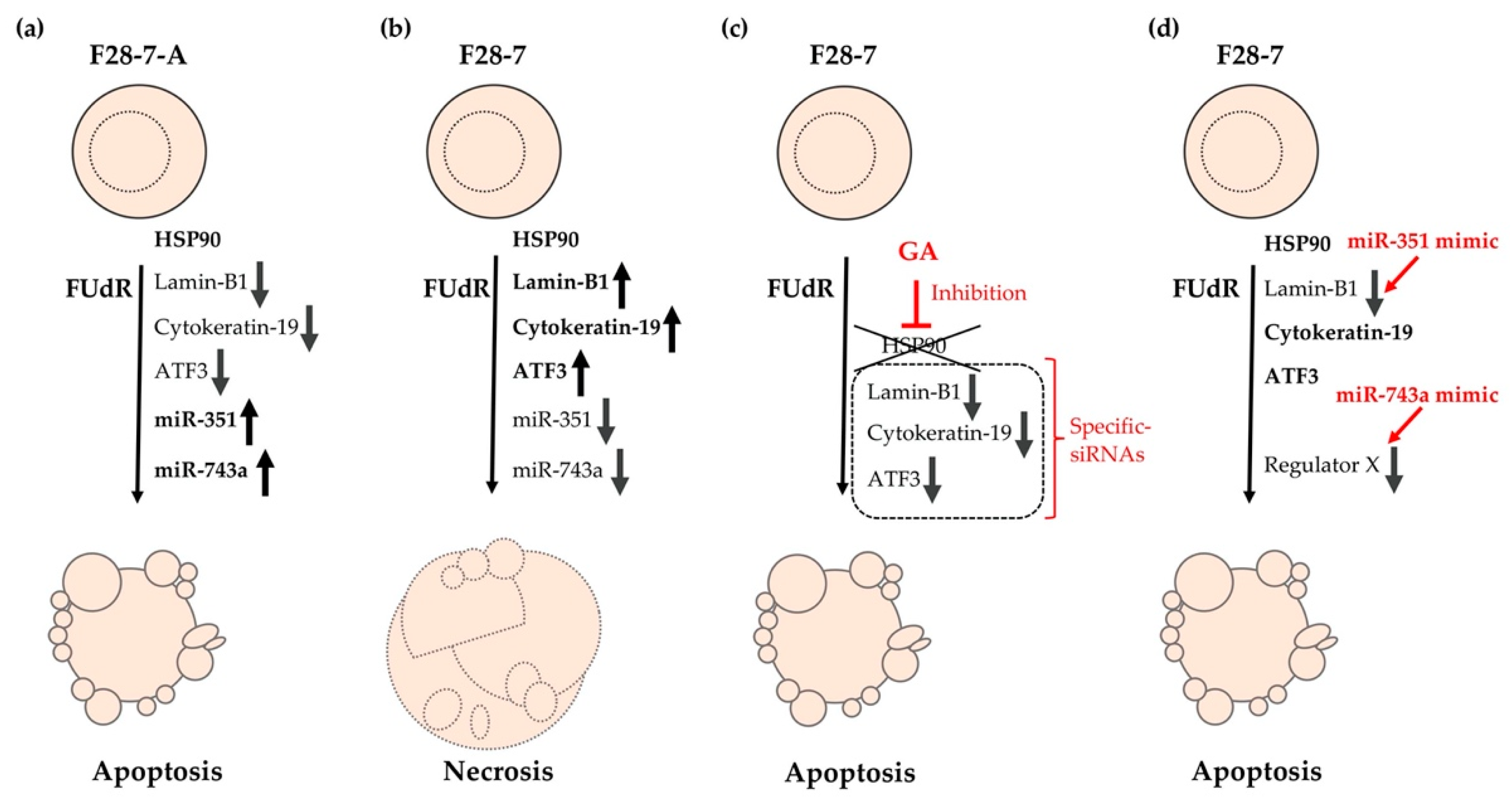 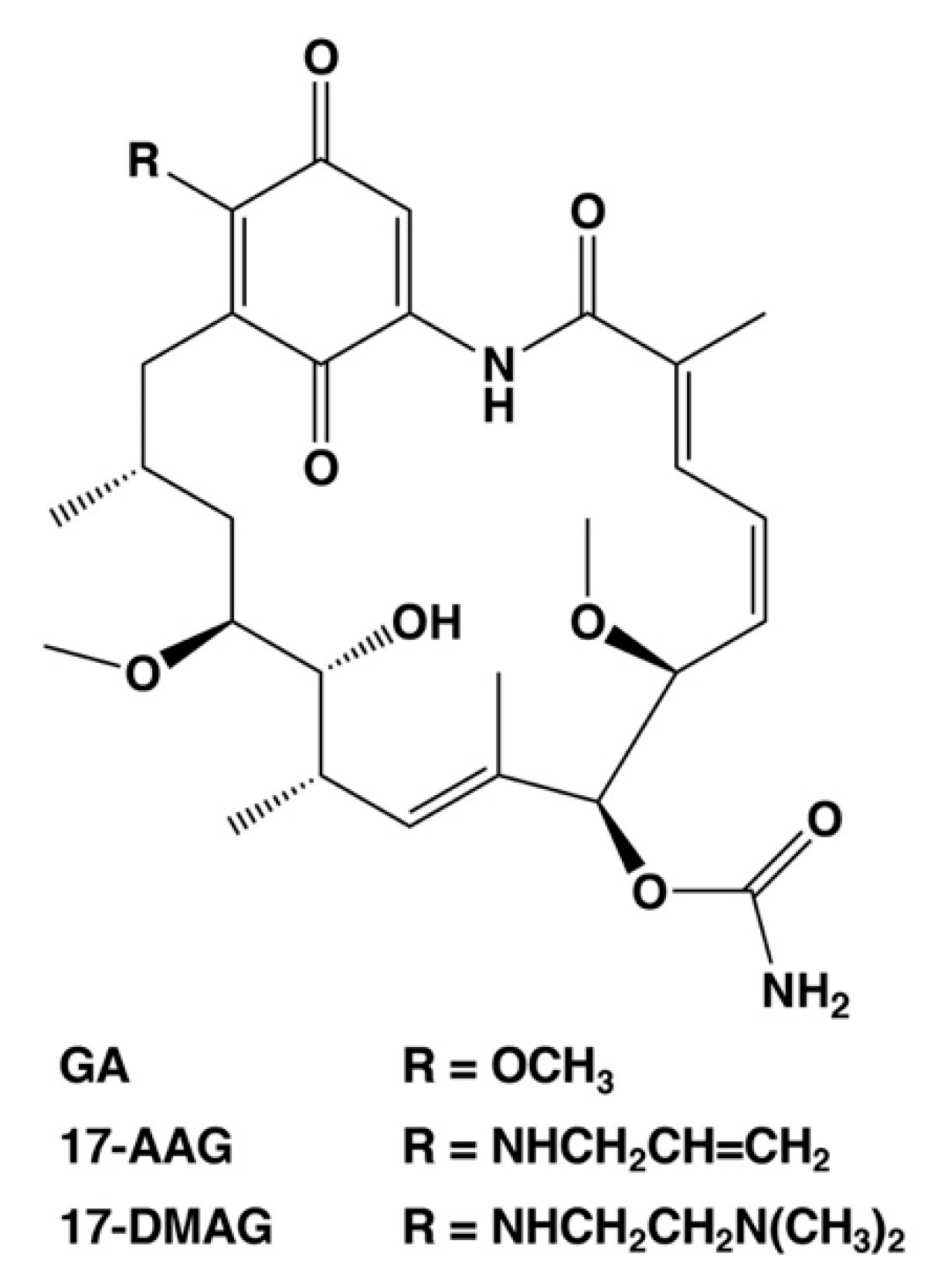