Linking Brassinosteroid and ABA Signaling in the Context of Stress Acclimation

Ozone is a strong oxidant, and its use in aquaculture has been shown to improve water quality and fish health. At present, it is predominantly used in freshwater systems due to the high risk of toxic residual oxidant exposure in brackish water and seawater. Here, we report the effects of ozone on Atlantic salmon (Salmo salar) post-smolts (~100 g), in a brackish water (12 ppt) flow-through system. Salmon were exposed to oxidation reduction potential concentrations of 250 mV (control), 280 mV (low), 350 mV (medium), 425 mV (high) and 500 mV (very high). The physiological impacts of ozone were characterized by blood biochemical profiling, histopathologic examination and gene expression analysis in skin and gills. Fish exposed to 425 mV and higher showed ≥33% cumulative mortality in less than 10 days. No significant mortalities were recorded in the remaining groups. The skin surface quality and the thickness of the dermal and epidermal layers were not significantly affected by the treatments. On the other hand, gill histopathology showed the adverse effects of increasing ozone doses and the changes were more pronounced in the group exposed to 350 mV and higher. Cases of gill damages such as necrosis, lamellar fusion and hypertrophy were prevalent in the high and very high groups. Expression profiling of key biomarkers for mucosal health supported the histology results, showing that gills were significantly more affected by higher ozone doses compared to the skin. Increasing ozone doses triggered anti-oxidative stress and inflammatory responses in the gills, where transcript levels of glutathione reductase, copper/zinc superoxide dismutase, interleukin 1β and interleukin were significantly elevated. Heat shock protein 70 was significantly upregulated in the skin of fish exposed to 350 mV and higher. Bcl-2 associated x protein was the only gene marker that was significantly upregulated by increasing ozone doses in both mucosal tissues. In conclusion, the study revealed that short-term exposure to ozone at concentrations higher than 350 mV in salmon in brackish water resulted in significant health and welfare consequences, including mortality and gill damages. The results of the study will be valuable in developing water treatment protocols for salmon farming. View Full-Text
Keywords: aquaculture; ozone; Atlantic salmon; brackish water; gill health aquaculture; ozone; Atlantic salmon; brackish water; gill health
►▼ Show Figures 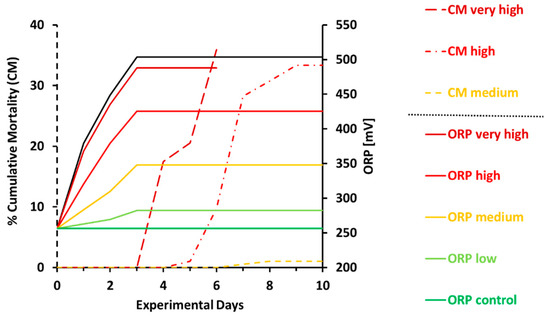