Although Stenotrophomonas maltophilia strains are efficient biocontrol agents, their field applications have raised concerns due to their possible threat to human health. The non-pathogenic Stenotrophomonas rhizophila species, which is closely related to S. maltophilia, has been proposed as an alternative. However, knowledge regarding the genetics of S. rhizophila is limited. Thus, the aim of the study was to define any genetic differences between the species and to characterise their ability to promote the growth of plant hosts as well as to enhance phytoremediation efficiency. We compared 37 strains that belong to both species using the tools of comparative genomics and identified 96 genetic features that are unique to S. maltophilia (e.g., chitin-binding protein, mechanosensitive channels of small conductance and KGG repeat-containing stress-induced protein) and 59 that are unique to S. rhizophila (e.g., glucosylglycerol-phosphate synthase, cold shock protein with the DUF1294 domain, and pteridine-dependent dioxygenase-like protein). The strains from both species have a high potential for biocontrol, which is mainly related to the production of keratinases (KerSMD and KerSMF), proteinases and chitinases. Plant growth promotion traits are attributed to the biosynthesis of siderophores, spermidine, osmoprotectants such as trehalose and glucosylglycerol, which is unique to S. rhizophila. In eight out of 37 analysed strains, the genes that are required to degrade protocatechuate were present. While our results show genetic differences between the two species, they had a similar growth promotion potential. Considering the information above, S. rhizophila constitutes a promising alternative for S. maltophilia for use in agricultural biotechnology. View Full-Text
Keywords: comparative genomics; degradation of xenobiotics; plant-associated bacteria; plant growth promotion; Stenotrophomonas maltophilia; Stenotrophomonas rhizophila comparative genomics; degradation of xenobiotics; plant-associated bacteria; plant growth promotion; Stenotrophomonas maltophilia; Stenotrophomonas rhizophila
►▼ Show Figures 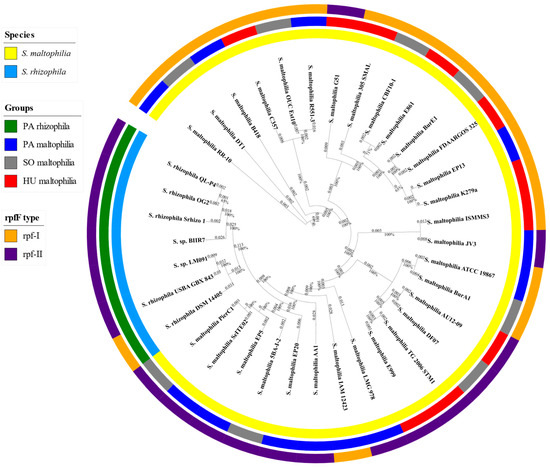