A Multi-Scale Study of Water Dynamics under Confinement, Exploiting Numerical Simulations in Relation to NMR Relaxometry, PGSE and NMR Micro-Imaging Experiments: An Application to the Clay/Water Interface
Previous Article in Special Issue

Role of ROS/RNS in Preeclampsia: Are Connexins the Missing Piece?

Preeclampsia is a pregnancy complication that appears after 20 weeks of gestation and is characterized by hypertension and proteinuria, affecting both mother and offspring. The cellular and molecular mechanisms that cause the development of preeclampsia are poorly understood. An important feature of preeclampsia is an increase in oxygen and nitrogen derived free radicals (reactive oxygen species/reactive nitrogen species (ROS/RNS), which seem to be central players setting the development and progression of preeclampsia. Cell-to-cell communication may be disrupted as well. Connexins (Cxs), a family of transmembrane proteins that form hemichannels and gap junction channels (GJCs), are essential in paracrine and autocrine cell communication, allowing the movement of signaling molecules between cells as well as between the cytoplasm and the extracellular media. GJCs and hemichannels are fundamental for communication between endothelial and smooth muscle cells and, therefore, in the control of vascular contraction and relaxation. In systemic vasculature, the activity of GJCs and hemichannels is modulated by ROS and RNS. Cxs participate in the development of the placenta and are expressed in placental vasculature. However, it is unknown whether Cxs are modulated by ROS/RNS in the placenta, or whether this potential modulation contributes to the pathogenesis of preeclampsia. Our review addresses the possible role of Cxs in preeclampsia, and the plausible modulation of Cxs-formed channels by ROS and RNS. We suggest these factors may contribute to the development of preeclampsia. View Full-Text
Keywords: free radicals; connexins; hemichannels; preeclampsia; gap junction channels; vasculature free radicals; connexins; hemichannels; preeclampsia; gap junction channels; vasculature
►▼ Show Figures 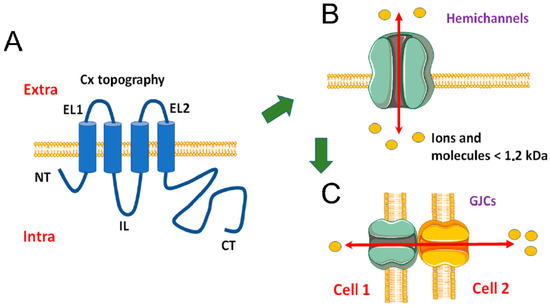