Energy Landscapes of Ligand Motion Inside the Tunnel-Like Cavity of Lipid Transfer Proteins: The Case of the Pru p 3 Allergen

Allergies are a widespread problem in western countries, affecting a large part of the population, with levels of prevalence increasingly rising due to reasons still not understood. Evidence accumulated in recent years points to an essential role played by ligands of allergen proteins in the sensitization phase of allergies. In this regard, we recently identified the natural ligand of Pru p 3, a lipid transfer protein, a major allergen from peach fruit and a model of food allergy. The ligand of Pru p 3 has been shown to play a key role in the sensitization to peach and to other plant food sources that provoke cross-reactivity in a large proportion of patients allergic to peach. However, the question of which is the binding pose of this ligand in its carrier protein, and how it can be transferred to receptors of the immune system where it develops its function as a coadjuvant was not elucidated. In this work, different molecular dynamics simulations have been considered as starting points to study the properties of the ligand–protein system in solution. Besides, an energy landscape based on collective variables that describe the process of ligand motion within the cavity of Pru p 3 was obtained by using well-tempered metadynamics. The simulations revealed the differences between distinct binding modes, and also revealed important aspects of the motion of the ligand throughout its carrier protein, relevant to its binding–unbinding process. Our findings are potentially interesting for studying protein–ligand systems beyond the specific case of the allergen protein dealt with here. View Full-Text
Keywords: allergy; lipid transfer proteins; molecular dynamics; enhanced sampling; metadynamics allergy; lipid transfer proteins; molecular dynamics; enhanced sampling; metadynamics
►▼ Show Figures 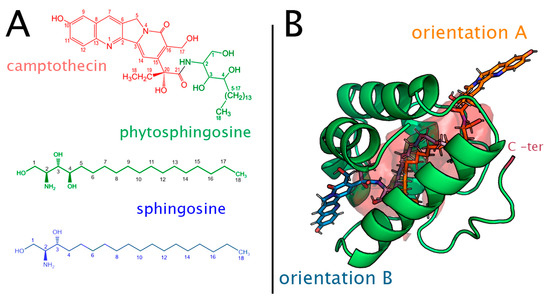 
Cuevas-Zuviría B, Garrido-Arandia M, Díaz-Perales A, Pacios LF. Energy Landscapes of Ligand Motion Inside the Tunnel-Like Cavity of Lipid Transfer Proteins: The Case of the Pru p 3 Allergen. International Journal of Molecular Sciences. 2019; 20(6):1432.