In the last decade, circulating nucleic acids such as microRNAs (miRNAs) and cell-free DNA (cfDNA) have become increasingly important in serving as potential novel biomarkers for a variety of human diseases. If cell-free nucleic acids are to become routinely used in diagnostics, the difference in plasma miRNA and cfDNA levels between healthy and diseased subjects must exceed pre-analytical and analytical variability. Until now, few studies have addressed the time limitations of pre-processing or explored the potential use of long-term blood storage tubes, which might need to be implemented in real-life diagnostics. In this study, we analyzed the stability of four breast cancer-associated miRNAs and two cancer-associated genes under various storage conditions, to test their limitations for potential application in clinical diagnostics. In two consecutive experiments, we tested the limits of conventional EDTA tubes, as well as long-term storage blood collection tubes (BCTs) from four different manufacturers. We found that circulating miRNAs are relatively stable when stored in EDTA monovettes for up to 12 h before processing. When stored in BCTs, circulating miRNAs and cfDNA are stable for up to 7 days, depending on the manufacturer. Norgen tubes were superior for cfDNA yield, while Streck tubes performed the worst in our study with hemolysis induction. In conclusion, plasma prepared from whole blood is suitable for the quantification of both cf-miRNAs and cfDNA simultaneously. View Full-Text
Keywords: circulating miRNA; cell-free DNA; blood storage; blood collection tubes circulating miRNA; cell-free DNA; blood storage; blood collection tubes
►▼ Show Figures 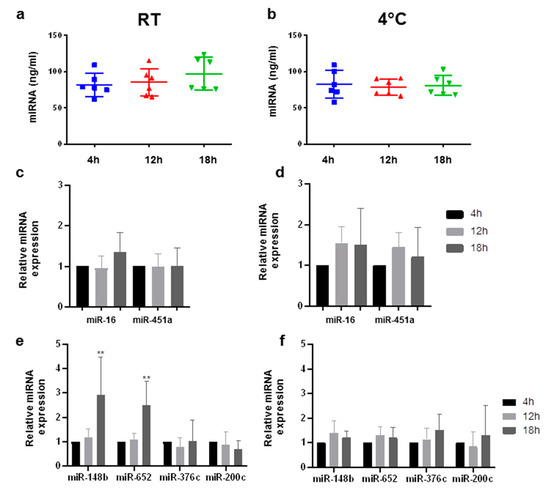