:
Glycans are involved in various metabolic processes via the functions of glycosyltransferases and glycoside hydrolases. Analysing the evolution of these enzymes is essential for improving the understanding of glycan metabolism and function. Based on our previous study of glycosyltransferases, we performed a genome-wide analysis of whole human glycoside hydrolases using the UniProt, BRENDA, CAZy and KEGG databases. Using cluster analysis, 319 human glycoside hydrolases were classified into four clusters based on their similarity to enzymes conserved in chordates or metazoans (Class 1), metazoans (Class 2), metazoans and plants (Class 3) and eukaryotes (Class 4). The eukaryote and metazoan clusters included N- and O-glycoside hydrolases, respectively. The significant abundance of disordered regions within the most conserved cluster indicated a role for disordered regions in the evolution of glycoside hydrolases. These results suggest that the biological diversity of multicellular organisms is related to the acquisition of N- and O-linked glycans.
Keywords:
glycoside hydrolase; glycan; phylogenetic profiling

Glycans are present in various biological molecules including glycoproteins, glycolipids and proteoglycans and in more than half of all human proteins. Glycans are widely distributed in eukaryotes, bacteria and archaea [1] and have similar structures in different organisms, including yeasts, plants, insects and chordates [2]. The high conservation of glycans in different species is biologically meaningful [3]. Human glycans can be classified into four major categories: O-linked (mucin-type) glycans, N-linked glycans, glycosphingolipids, and glycosaminoglycans. These glycans play important roles in vivo, including in cell membrane/extracellular matrix (ECM) construction, cell adhesion, protein stabilisation and transmission of information [4,5]. Abnormalities in glycan structures are closely related to certain diseases such as neurological disorders, cancer metastasis, Alzheimer’s disease and diabetes [6]. The diversity of glycan functions depends on the diversity of glycan structures, i.e., the combination of monosaccharides constituting a glycan, differences in binding sites and differences in branching modes. However, the mechanisms mediating the acquisition of various glycan categories, balance between biosynthesis and degradation, and essential biological significance of glycans are unclear.
The biosynthesis and degradation of various glycan structures are mainly catalysed by glycosyltransferases and glycoside hydrolases, respectively. Glycosyltransferases function to regulate the elongation of glycans, and variations in glycosyltransferases result in diverse substrate specificities such as the type of sugar to be transferred and specific binding position of the sugar. For genome-wide evolutionary analysis of glycosyltransferases, we previously performed lineage profile analysis of 173 human glycosyltransferases [3]. The results indicate that human glycosyltransferases can be roughly divided into four categories based on their similarity to enzymes conserved in deuterostomes (Class 1), metazoans (Class 2), eukaryotes (Class 3), and eukaryotes, bacteria and archaea (Class 4). Two glycosyltransferase groups, synthesise O- and N-linked glycans, are present in the Golgi apparatus in deuterostomes and metazoans and in the endoplasmic reticulum of eukaryotes. Thus, we found that the localisation and function of glycosyltransferases conserved among deuterostomes, metazoans and other eukaryotes were distinctly different. Furthermore, our findings suggested that N-linked glycan structures existed before O-linked glycans during the evolution of these molecules in humans [3].
Glycoside hydrolases have substrate specificities similar to those of glycosyltransferases; however, many of glycosyltransferases have a strict substrate specificity, whereas glycoside hydrolases show a looser substrate specificity. Glycoside hydrolases function to cleave glycosidic bonds in glycans, and many are in lysosomes [7]. In addition to glycan degradation in lysosomes, glycoside hydrolases are closely associated with in vivo functions, such as the quality control of proteins by the processing of high-mannose-type (N-linked-type) glycans and remodelling of ECM comprising O-linked glycans and glycosaminoglycans [8]. Notably, glycoside hydrolases have been shown to play roles in lysosomal storage diseases. The lysosome is an intracellular organelle that decomposes waste products via the functions of various hydrolytic enzymes. Lysosomal storage diseases are caused by the accumulation of undegraded substances because of genetic abnormalities affecting the expression of glycoside hydrolases in lysosomes [9]. Symptoms of lysosomal storage diseases are diverse and severe. Additionally, both the synthesis of glycans and decomposition of glycans are involved in biological functions; however, the detailed functions of sugar hydrolases in lysosomes have not been determined. Particularly, the roles of glycoside hydrolases for O-linked glycans are unclear in lysosomal storage diseases [8].
Protein evolution is driven by function, which critically depends on the structure. This is supported by comparison of evolutionary rates between ordered and disordered structured proteins. Disordered regions commonly evolve faster than ordered structures [10,11,12,13,14] because of differences in the relative constraints that maintain folding interactions [15]. However, there are exceptions to this rule. For instance, specific functional binding and modification regions of a disordered structure are constrained [13,14,16], thus introducing heterogeneity into evolutionary rates.
In this study, we evaluated glycan degradation by performing a genome-wide analysis of 319 human glycoside hydrolases. By comparing the results of analysis of glycosyltransferases [3] and their protein structures, we clarified the acquisition process of each glycan category during evolution.

2.4. Comparison of Decomposition Substrates Among Classes of Glycoside Hydrolases

2.5. Identification of Glycoside Hydrolases Important for the Evolution to Mammals

Molecular phylogenetic analysis was conducted to investigate how human glycoside hydrolases evolved in the process of evolution from chordates to mammals (Figure 4). Sialidase, which is involved in neuronal and muscle differentiation, and lysozyme, which plays an important role in mammalian embryos, were acquired before the emergence of cartilaginous fish and of the common ancestor of birds and mammals, respectively. Glucosylceramidase, a Class 2 glycolipid-metabolising enzyme, was conserved in most Chordata but was lost during evolution in some chordates including Gallus spp. and Xenopus laevis. Accordingly, we hypothesised that sialidase, lysozyme and glucosylceramidase were necessary for the evolution to mammals.

2.6. Evolution of Glycosyltransferases and Glycoside Hydrolases

Phylogenetic profiles were generated for 326 genome-wide eukaryotic sequences using KEGG OC default parameters in the KEGG database and extracted human glycoside hydrolase data as queries. Human glycoside hydrolase conservation in eukaryotes was examined using a BLAST search (E-value: 10−3; NIH). A bit score of 1 was assigned if orthologs of the protein of interest were present in the other genome; otherwise, a bit score of 0 was assigned. Proteins with similar bit patterns were expected to have similar interactions and functions. Further, using the bit pattern as an input, cluster analysis of the 319 human GHs and 326 eukaryotes from KEGG OC were performed using Ward’s method [39] based on the Manhattan distance. Computational and cluster analyses were performed using Ruby and R programming languages.

A phylogenetic tree of glycoside hydrolases was manually constructed, and a model for the time divergence of chordates to mammals during evolution was presented as described by Rowe [40].

Human glycoside hydrolases were classified based on structural order/disorder into three categories: structured proteins, proteins with structured domains and disordered regions and intrinsically disordered proteins (IDPs). Allocation into these categories was performed according to the proportion of short IDRs (functional regions) of 15 residues [41]. The structured proteins were defined as proteins without any IDRs; IDPs were defined as proteins with IDRs spanning throughout the entire sequence, and the last category included proteins made up of both IDRs and structured regions [33]. The structural order/disorder propensity of the dataset was predicted using IUPred2a with 0.5 as the cut-off between order and disorder [42]. A value of 0 indicated a strong propensity for being ordered, and that of 1 indicated a strong propensity for being disordered. Continuous stretches of IDRs were plotted at n ≥ 30, 40, …, 130, as a stretch of more than 30 residues was required for categorisation as a long disordered region, with potential functions in recognition or interactions [33,43].

The source codes used for our experiments are available at https://github.com/ritsumei-infobio/phylogenetic_profiling.

This study was supported by the MEXT-Supported Program for the Strategic Research Foundation at Private Universities (2015–2019) and Takeda Science Foundation.

We would like to thank Information Biology Laboratory members at Ritsumeikan University. 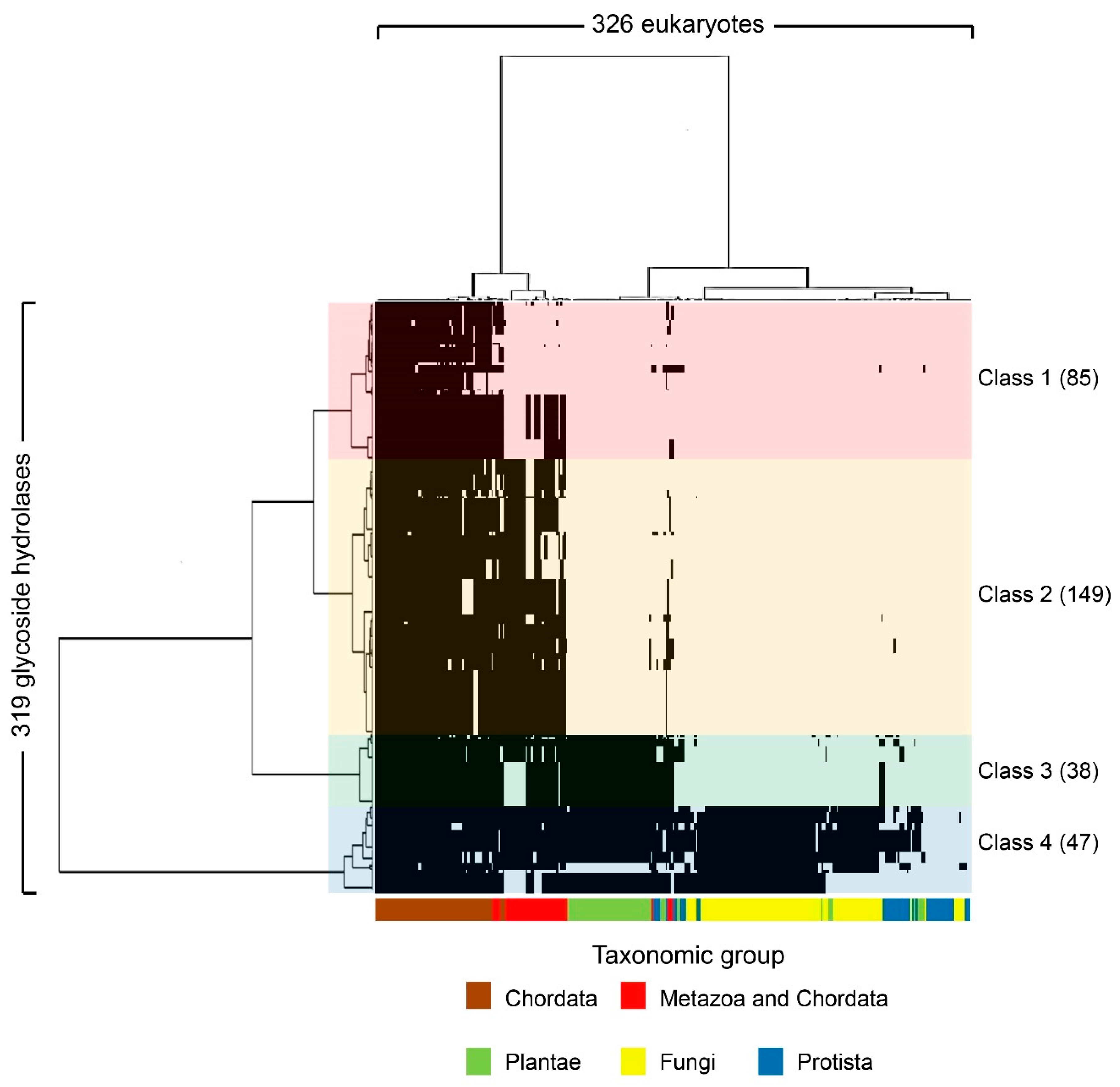 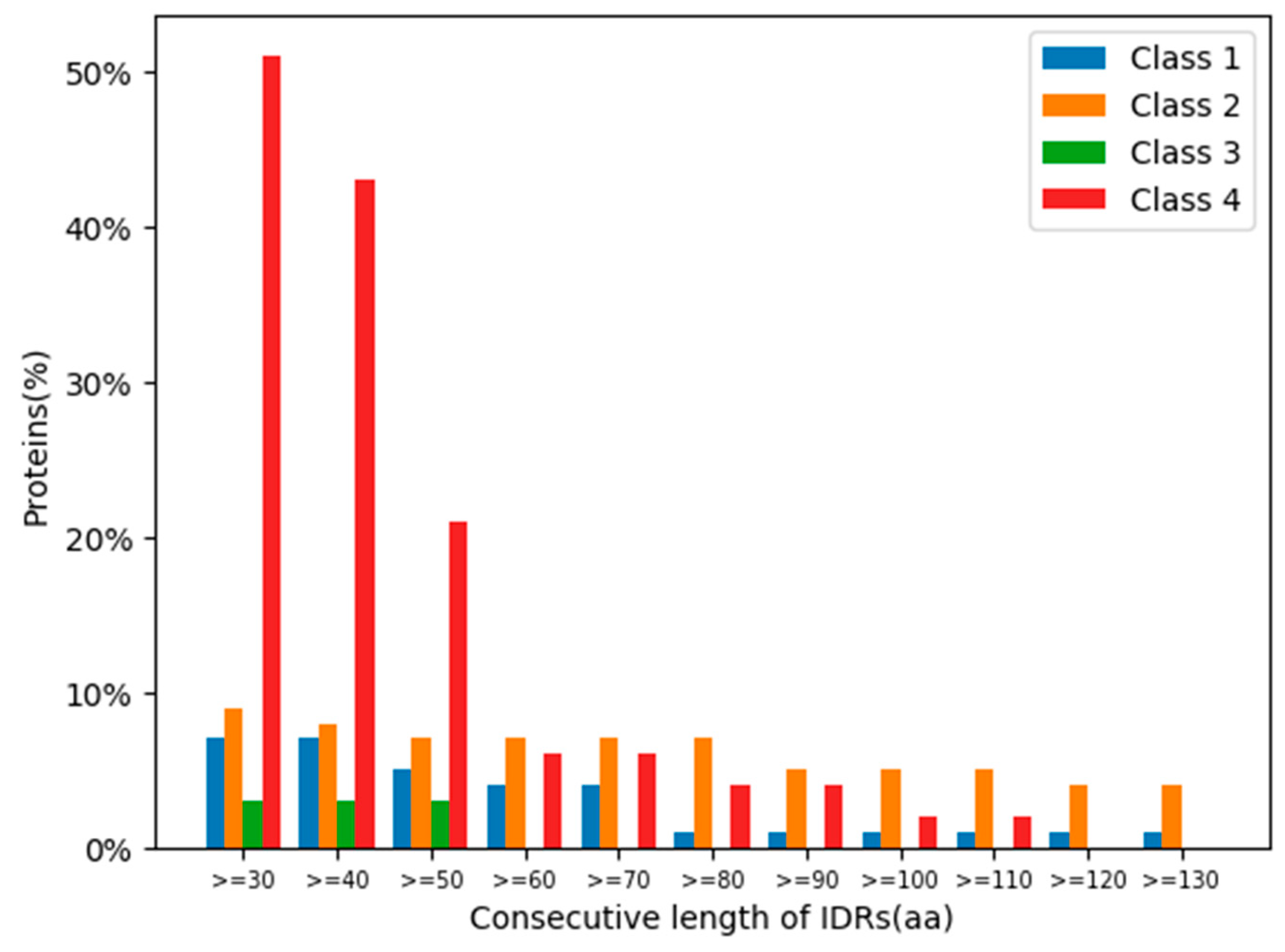