Routine identification of bark and ambrosia beetles is done using morphology. For people lacking the necessary taxonomic knowledge, proper identification of a novel specimen can be challenging and time consuming. This study compares the usefulness of four genetic markers (28S, EF-1a, ITS2, and COI) and five primer pairs (D2F1/D3R2, eflafor1/eflarev1, ets149/efa754, ITS2F/ITS2R, and LCO1490/HCO2198) to identify Scolytinae beetles, and outlines a molecular identification strategy, with results possible in two days. Markers COI and EF-1a were selected based on the ability of the respective primers to amplify DNA from multiple genera (Coptoborus, Xyleborus, Hypothenemus, Theoborus, and Araptus) and the ability of the resulting sequences to provide accurate and unambiguous matches in GenBank. BLASTn analysis of EF-1a sequences (both primer pairs) correctly identified four out of the five genera and COI sequences identified at least one sample of every genus tested and was the only primer pair to correctly identify Araptus specimens. Further, 28S sequences successfully identified Coptoborus, Xyleborus, and Theoborus but not Hypothenemus or Araptus. The low number of EF-1a (1), 28S (7), and ITS2 (0) sequences from Araptus individuals present in GenBank compared with COI (137) is likely the reason that only the latter marker was capable of identifying members of this genus. ITS2 sequences were insufficient to identify any of the samples tested. This study also determined the minimum quantity of DNA that could be used for molecular identification. Primers D2F1 and D3R2, which had the highest rate of amplification in all genera tested, could yield an informative sequence with as little as 0.00048 ng of DNA, however, at least 0.0024 ng was needed for reliable amplification. View Full-Text
Keywords: DNA barcoding; Coptoborus; Xyleborus; Theoborus; Hypothenemus; Araptus; molecular markers; ambrosia beetles; bark beetles; Scolytinae DNA barcoding; Coptoborus; Xyleborus; Theoborus; Hypothenemus; Araptus; molecular markers; ambrosia beetles; bark beetles; Scolytinae
►▼ Show Figures 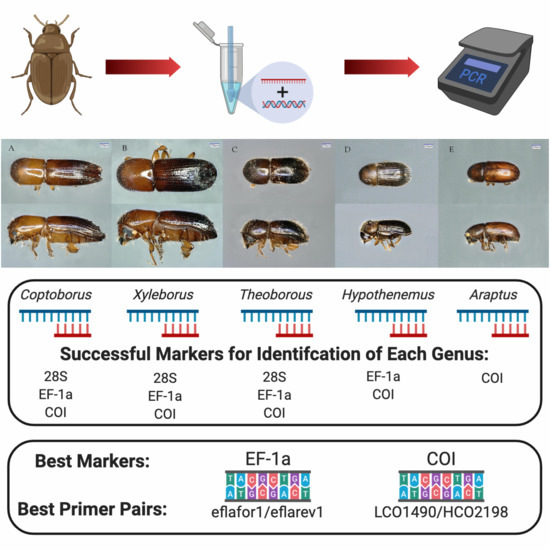