Synthesis, Bioapplications, and Toxicity Evaluation of Chitosan-Based Nanoparticles
Next Article in Special Issue

Citrus Genetic Engineering for Disease Resistance: Past, Present and Future

Phenolic compounds are implied in plant-microorganisms interaction and may be induced in response to plant growth-promoting rhizobacteria (PGPRs). Among PGPR, the beneficial bacterium Paraburkholderia phytofirmans PsJN was previously described to stimulate the growth of plants and to induce a better adaptation to both abiotic and biotic stresses. This study aimed to investigate the impact of PsJN on grapevine secondary metabolism. For this purpose, gene expression (qRT-PCR) and profiling of plant secondary metabolites (UHPLC-UV/DAD-MS QTOF) from both grapevine root and leaves were compared between non-bacterized and PsJN-bacterized grapevine plantlets. Our results showed that PsJN induced locally (roots) and systemically (leaves) an overexpression of PAL and STS and specifically in leaves the overexpression of all the genes implied in phenylpropanoid and flavonoid pathways. Moreover, the metabolomic approach revealed that relative amounts of 32 and 17 compounds in roots and leaves, respectively, were significantly modified by PsJN. Once identified to be accumulated in response to PsJN by the metabolomic approach, antifungal properties of purified molecules were validated in vitro for their antifungal effect on Botrytis cinerea spore germination. Taking together, our findings on the impact of PsJN on phenolic metabolism allowed us to identify a supplementary biocontrol mechanism developed by this PGPR to induce plant resistance against pathogens. View Full-Text
Keywords: Vitis vinifera; beneficial bacterium; phenolic compounds; qRT-PCR; UHPLC-UV/DAD-MS QTOF Vitis vinifera; beneficial bacterium; phenolic compounds; qRT-PCR; UHPLC-UV/DAD-MS QTOF
►▼ Show Figures 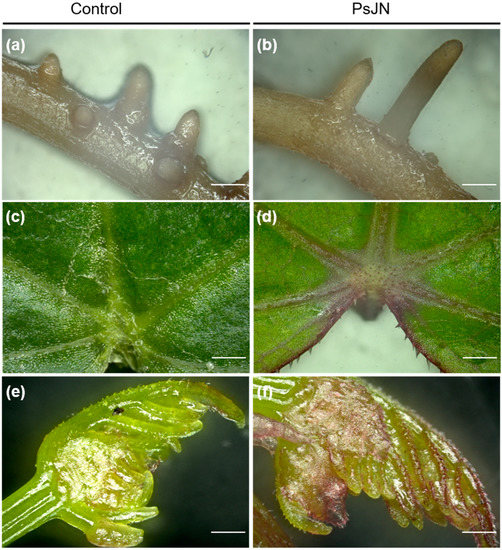