Predictive Value of Serum Antibodies and Point Mutations of AQP4, AQP1 and MOG in A Cohort of Spanish Patients with Neuromyelitis Optica Spectrum Disorders
Previous Article in Journal

Sodium/phosphate co-transporters are considered to be important mediators of phosphorus (P) homeostasis. The expression of specific sodium/phosphate co-transporters is routinely used as an immediate response to dietary interventions in different species. However, a general understanding of their tissue-specificity is required to elucidate their particular contribution to P homeostasis. In this study, the tissue-wide gene expression status of all currently annotated sodium/phosphate co-transporters were investigated in two pig trials focusing on a standard commercial diet (trial 1) or divergent P-containing diets (trial 2). A wide range of tissues including the gastrointestinal tract (stomach, duodenum, jejunum, ileum, caecum, and colon), kidney, liver, bone, muscle, lung, and aorta were analyzed. Both trials showed consistent patterns in the overall tissue-specific expression of P transporters. While SLC34A2 was considered as the most important intestinal P transporter in other species including humans, SLC34A3 appeared to be the most prominent intestinal P transporter in pigs. In addition, the P transporters of the SLC17 family showed basal expression in the pig intestine and might have a contribution to P homeostasis. The expression patterns observed in the distal colon provide evidence that the large intestine may also be relevant for intestinal P absorption. A low dietary P supply induced higher expressions of SLC20A1, SLC20A2, SLC34A1, and SLC34A3 in the kidney cortex. The results suggest that the expression of genes encoding transcellular P transporters is tissue-specific and responsive to dietary P supply, while underlying regulatory mechanisms require further analyses. View Full-Text
Keywords: phosphorus homeostasis; pig; tissue-specific transcript rate; transcellular Na+/Pi co-transporter phosphorus homeostasis; pig; tissue-specific transcript rate; transcellular Na+/Pi co-transporter
►▼ Show Figures 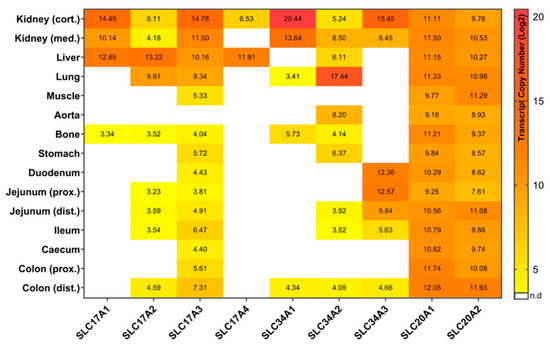