Effector proteins play an important role in the virulence of plant pathogens such as phytoplasma, which are the causative agents of hundreds of different plant diseases. The plant hosts comprise economically relevant crops such as apples (Malus × domestica), which can be infected by ‘Candidatus Phytoplasma mali’ (P. mali), a highly genetically dynamic plant pathogen. As the result of the genetic and functional analyses in this study, a new putative P. mali effector protein was revealed. The so-called “Protein in Malus Expressed 2” (PME2), which is expressed in apples during P. mali infection but not in the insect vector, shows regional genetic differences. In a heterologous expression assay using Nicotiana benthamiana and Nicotiana occidentalis mesophyll protoplasts, translocation of both PME2 variants in the cell nucleus was observed. Overexpression of the effector protein affected cell integrity in Nicotiana spp. protoplasts, indicating a potential role of this protein in pathogenic virulence. Interestingly, the two genetic variants of PME2 differ regarding their potential to manipulate cell integrity. However, the exact function of PME2 during disease manifestation and symptom development remains to be further elucidated. Aside from the first description of the function of a novel effector of P. mali, the results of this study underline the necessity for a more comprehensive description and understanding of the genetic diversity of P. mali as an indispensable basis for a functional understanding of apple proliferation disease. View Full-Text
Keywords: phytoplasma; effector protein; apple; pathogenicity; virulence; apple proliferation phytoplasma; effector protein; apple; pathogenicity; virulence; apple proliferation
►▼ Show Figures 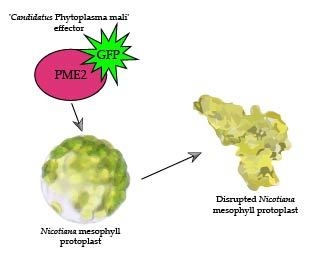