In various models of chronic kidney disease, the amount and localization of Cx43 in the nephron is known to increase, but the intracellular pathways that regulate these changes have not been identified. Therefore, we proposed that: “In the model of renal damage induced by infusion of angiotensin II (AngII), a RhoA/ROCK-dependent pathway, is activated and regulates the abundance of renal Cx43”. In rats, we evaluated: 1) the time-point where the renal damage induced by AngII is no longer reversible; and 2) the involvement of a RhoA/ROCK-dependent pathway and its relationship with the amount of Cx43 in this irreversible stage. Systolic blood pressure (SBP) and renal function (urinary protein/urinary creatinine: Uprot/UCrea) were evaluated as systemic and organ outcomes, respectively. In kidney tissue, we also evaluated: 1) oxidative stress (amount of thiobarbituric acid reactive species), 2) inflammation (immunoperoxidase detection of the inflammatory markers ED-1 and IL-1β), 3) fibrosis (immune detection of type III collagen; Col III) and 4) activity of RhoA/ROCK (amount of phosphorylated MYPT1; p-MYPT1). The ratio Uprot/UCrea, SBP, oxidative stress, inflammation, amount of Cx43 and p-MYPT1 remained high 2 weeks after suspending AngII treatment in rats treated for 4 weeks with AngII. These responses were not observed in rats treated with AngII for less than 4 weeks, in which all measurements returned spontaneously close to the control values after suspending AngII treatment. Rats treated with AngII for 6 weeks and co-treated for the last 4 weeks with Fasudil, an inhibitor of ROCK, showed high SBP but did not present renal damage or increased amount of renal Cx43. Therefore, renal damage induced by AngII correlates with the activation of RhoA/ROCK and the increase in Cx43 amounts and can be prevented by inhibitors of this pathway. View Full-Text
Keywords: Hypertensive nephropathy; oxidative stress; fibrosis; inflammation; Cx43; Fasudil Hypertensive nephropathy; oxidative stress; fibrosis; inflammation; Cx43; Fasudil
►▼ Show Figures 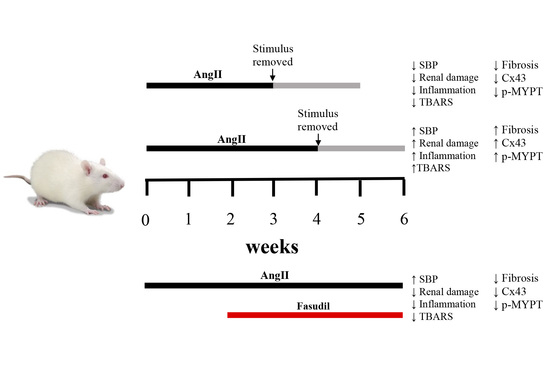