Neotropical cichlid fishes are one of the most diversified and evolutionarily successful species assemblages. Extremely similar forms and intraspecific polychromatism present challenges for the taxonomy of some of these groups. Several species complexes have a largely unknown origin and unresolved evolutionary processes. Dwarf cichlids of the genus Apistogramma, comprising more than a hundred species, exhibit intricate taxonomic and biogeographic patterns, with both allopatric and sympatric distributions. However, karyotype evolution and the role of chromosomal changes in Apistogramma are still unknown. In the present study, nine South American Apistogramma species were analyzed using conventional cytogenetic methods and the mapping of repetitive DNA sequences [18S rDNA, 5S rDNA, and (TTAGGG)n] by fluorescence in situ hybridization (FISH). Our results showed that Apistogramma has unique cytogenetic characteristics in relation to closely related groups, such as a reduced 2n and a large number of bi-armed chromosomes. Interspecific patterns revealed a scenario of remarkable karyotypic changes, including a reduction of 2n, the occurrence of B-chromosomes and evolutionary dynamic of rDNA tandem repeats. In addition to the well-known pre-zygotic reproductive isolation, the karyotype reorganization in the genus suggests that chromosomal changes could act as postzygotic barriers in areas where Apistogramma congeners overlap. View Full-Text
Keywords: Neotropical cichlids; dwarf species; repetitive DNAs; karyotype evolution; species flock; postzygotic isolation Neotropical cichlids; dwarf species; repetitive DNAs; karyotype evolution; species flock; postzygotic isolation
►▼ Show Figures 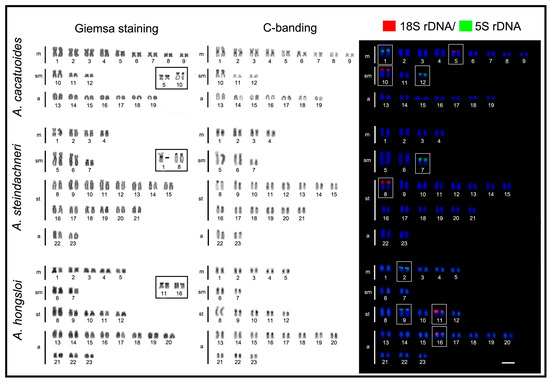