Chlorin, Phthalocyanine, and Porphyrin Types Derivatives in Phototreatment of Cutaneous Manifestations: A Review

by Nicholas A. S. Robichaud 1,

Although lung surfactant protein B (SP-B) is an essential protein that plays a crucial role in breathing, the details of its structure and mechanism are not well understood. SP-B forms covalent homodimers, and in this work we use all-atom molecular dynamics simulations to study dimeric SP-B’s structure and its behavior in promoting lipid structural transitions. Four initial system configurations were constructed based on current knowledge of SP-B’s structure and mechanism, and the protein maintained a helicity consistent with experiment in all systems. Several SP-B-induced lipid reorganization behaviors were observed, and regions of the protein particularly important for these activities included SP-B’s “central loop” and “hinge” regions. SP-B dimers with one subunit initially positioned in each of two adjacent bilayers appeared to promote close contact between two bilayers. When both subunits were initially positioned in the same bilayer, SP-B induced the formation of a defect in the bilayer, with water penetrating into the centre of the bilayer. Similarly, dimeric SP-B showed a propensity to interact with preformed interpores in the bilayer. SP-B dimers also promoted bilayer thinning and creasing. This work fleshes out the atomistic details of the dimeric SP-B structures and SP-B/lipid interactions that underlie SP-B’s essential functions. View Full-Text
Keywords: lung surfactant; surfactant protein B; SP-B; protein structure; lipid; membrane; molecular dynamics; simulation; all-atom lung surfactant; surfactant protein B; SP-B; protein structure; lipid; membrane; molecular dynamics; simulation; all-atom
►▼ Show Figures 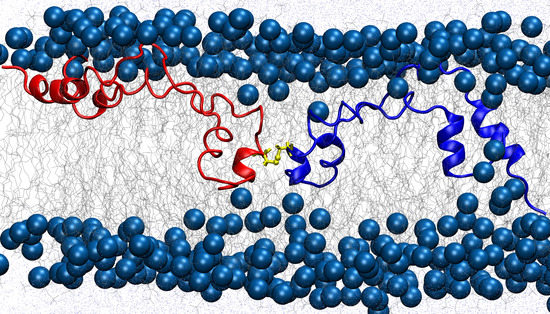