The purpose of the present study was to evaluate the effects of bakuchiol on the inflammatory response and to identify the molecular mechanism of the inflammatory effects in a lipopolysaccharide (LPS)-stimulated BV-2 mouse microglial cell line and mice model. The production of prostaglandin E2 (PGE2), tumor necrosis factor-α (TNF-α), and interleukin-6 (IL-6) was measured by enzyme-linked immunosorbent assay. The mRNA expression of inducible nitric oxide synthase (iNOS), cyclooxygenase-2 (COX-2), TNF-α, and IL-6 was measured using reverse transcription–polymerase chain reaction analysis. Mitogen-activated protein kinase (MAPK) phosphorylation was determined by western blot analysis. In vitro experiments, bakuchiol significantly suppressed the production of PGE2 and IL-6 in LPS-stimulated BV-2 cells, without causing cytotoxicity. In parallel, bakuchiol significantly inhibited the LPS-stimulated expression of iNOS, COX-2, and IL-6 in BV-2 cells. However, bakuchiol had no effect on the LPS-stimulated production and mRNA expression of TNF-α or on LPS-stimulated c-Jun NH2-terminal kinase phosphorylation. In contrast, p38 MAPK and extracellular signal-regulated kinase (ERK) phosphorylation were inhibited by bakuchiol. In vivo experiments, Bakuchiol reduced microglial activation in the hippocampus and cortex tissue of LPS-injected mice. Bakuchiol significantly suppressed LPS-injected production of TNF-α and IL-6 in serum. These results indicate that the anti-neuroinflammatory effects of bakuchiol in activated microglia are mainly regulated by the inhibition of the p38 MAPK and ERK pathways. We suggest that bakuchiol may be beneficial for various neuroinflammatory diseases. View Full-Text
Keywords: bakuchiol; inflammatory response; MAPK phosphorylation; microglia; neuroinflammation bakuchiol; inflammatory response; MAPK phosphorylation; microglia; neuroinflammation
►▼ Show Figures 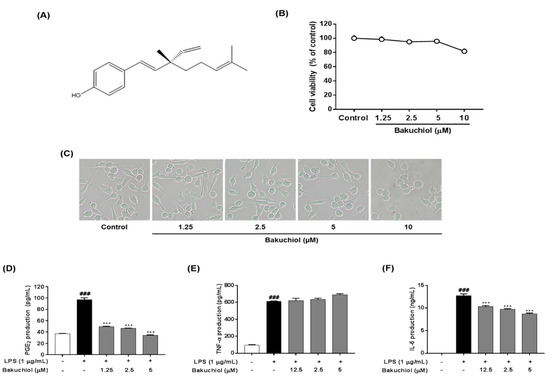