(1) Background: Vitamin D (VD) plays a vital role in anti-viral innate immunity. However, the role of VD in anti-rotavirus and its mechanism is still unclear. The present study was performed to investigate whether VD alleviates rotavirus (RV) infection through a microRNA-155-5p (miR-155-5p)-mediated regulation of TANK-binding kinase 1 (TBK1)/interferon regulatory factors 3 (IRF3) signaling pathway in vivo and in vitro. (2) Methods: The efficacy of VD treatment was evaluated in DLY pig and IPEC-J2. Dual-luciferase reporter activity assay was performed to verify the role of miR-155-5p in 1α,25-dihydroxy-VD3 (1,25D3) mediating the regulation of the TBK1/IRF3 signaling pathway. (3) Results: A 5000 IU·kg–1 dietary VD3 supplementation attenuated RV-induced the decrease of the villus height and crypt depth (p < 0.05), and up-regulated TBK1, IRF3, and IFN-β mRNA expressions in the jejunum (p < 0.05). Incubation with 1,25D3 significantly decreased the RV mRNA expression and the RV antigen concentration, and increased the TBK1 mRNA and protein levels, and the phosphoprotein IRF3 (p-IRF3) level (p < 0.05). The expression of miR-155-5p was up-regulated in response to an RV infection in vivo and in vitro (p < 0.05). 1,25D3 significantly repressed the up-regulation of miR-155-5p in vivo and in vitro (p < 0.05). Overexpression of miR-155-5p remarkably suppressed the mRNA and protein levels of TBK1 and p-IRF3 (p < 0.01), while the inhibition of miR-155-5p had an opposite effect. Luciferase activity assays confirmed that miR-155-5p regulated RV replication by directly targeting TBK1, and miR-155-5p suppressed the TBK1 protein level (p < 0.01). (4) Conclusions: These results indicate that miR-155-5p is involved in 1,25D3 mediating the regulation of the TBK1/IRF3 signaling pathway by directly targeting TBK1. View Full-Text
Keywords: VD; rotavirus; TBK1/IRF3; microRNA-155-5p; pigs; IPEC-J2 VD; rotavirus; TBK1/IRF3; microRNA-155-5p; pigs; IPEC-J2
►▼ Show Figures 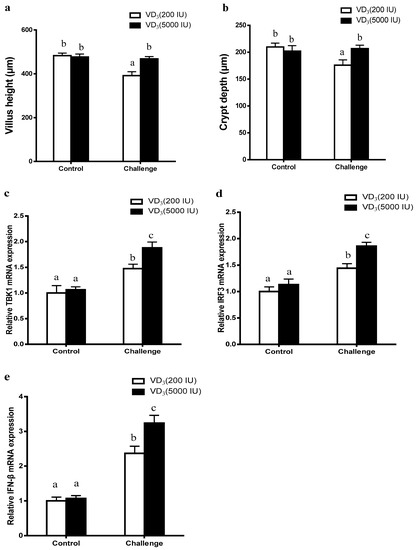