Cardiomyopathy Associated with Diabetes: The Central Role of the Cardiomyocyte
Previous Article in Journal

The ubiquitin proteasome 26S system (UPS), involving monomeric and multimeric E3 ligases is one of the most important signaling pathways in many organisms, including plants. The SCF (SKP1/Cullin/F-box) multimeric complex is particularly involved in response to development and stress signaling. The SKP1 protein (S-phase kinase-associated protein 1) is the core subunit of this complex. In this work, we firstly identified 92 and 87 non-redundant Triticum aestivum SKP1-like (TaSKP) genes that were retrieved from the latest release of the wheat genome database (International Wheat Genome Sequencing Consortium (IWGSC) RefSeq v1.0) and the genome annotation of the TGAC v1 respectively. We then investigated the structure, phylogeny, duplication events and expression patterns of the SKP1-like gene family in various tissues and environmental conditions using a wheat expression platform containing public data. TaSKP1-like genes were expressed differentially in response to stress conditions, displaying large genomic variations or short insertions/deletions which suggests functional specialization within TaSKP1-like genes. Finally, interactions between selected wheat FBX (F-box) proteins and putative ancestral TaSKP1-like proteins were tested using the yeast two-hybrid (Y2H) system to examine the molecular interactions. These observations suggested that six Ta-SKP1 genes are likely to be ancestral genes, having similar functions as ASK1 and ASK2 in Arabidopsis, OSK1 and OSK20 in rice and PpSKP1 and PpSKP2 in Physcomitrella patens. View Full-Text
Keywords: SKP1; Triticum aestivum; structural and evolution analysis; Y2H SKP1; Triticum aestivum; structural and evolution analysis; Y2H
►▼ Show Figures 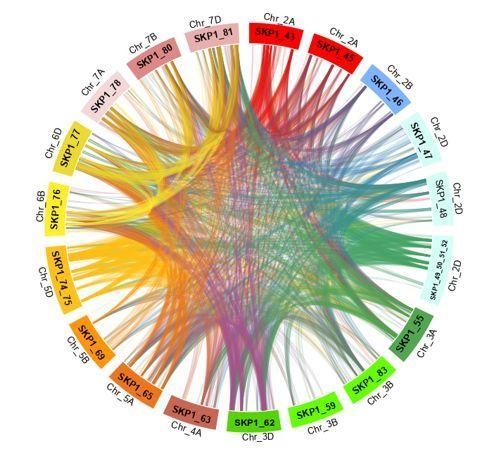