Effect of Indoxyl Sulfate on the Repair and Intactness of Intestinal Epithelial Cells: Role of Reactive Oxygen Species’ Release

Mitochondria as a Source and a Target for Uremic Toxins

Elucidation of molecular and cellular mechanisms of the uremic syndrome is a very challenging task. More than 130 substances are now considered to be “uremic toxins” and represent a very diverse group of molecules. The toxicity of these molecules affects many cellular processes, and expectably, some of them are able to disrupt mitochondrial functioning. However, mitochondria can be the source of uremic toxins as well, as the mitochondrion can be the site of complete synthesis of the toxin, whereas in some scenarios only some enzymes of the pathway of toxin synthesis are localized here. In this review, we discuss the role of mitochondria as both the target and source of pathological processes and toxic compounds during uremia. Our analysis revealed about 30 toxins closely related to mitochondria. Moreover, since mitochondria are key regulators of cellular redox homeostasis, their functioning might directly affect the production of uremic toxins, especially those that are products of oxidation or peroxidation of cellular components, such as aldehydes, advanced glycation end-products, advanced lipoxidation end-products, and reactive carbonyl species. Additionally, as a number of metabolic products can be degraded in the mitochondria, mitochondrial dysfunction would therefore be expected to cause accumulation of such toxins in the organism. Alternatively, many uremic toxins (both made with the participation of mitochondria, and originated from other sources including exogenous) are damaging to mitochondrial components, especially respiratory complexes. As a result, a positive feedback loop emerges, leading to the amplification of the accumulation of uremic solutes. Therefore, uremia leads to the appearance of mitochondria-damaging compounds, and consecutive mitochondrial damage causes a further rise of uremic toxins, whose synthesis is associated with mitochondria. All this makes mitochondrion an important player in the pathogenesis of uremia and draws attention to the possibility of reducing the pathological consequences of uremia by protecting mitochondria and reducing their role in the production of uremic toxins. View Full-Text
Keywords: uremia; oxidative stress; mitochondria; kidney injury; toxins uremia; oxidative stress; mitochondria; kidney injury; toxins
►▼ Show Figures 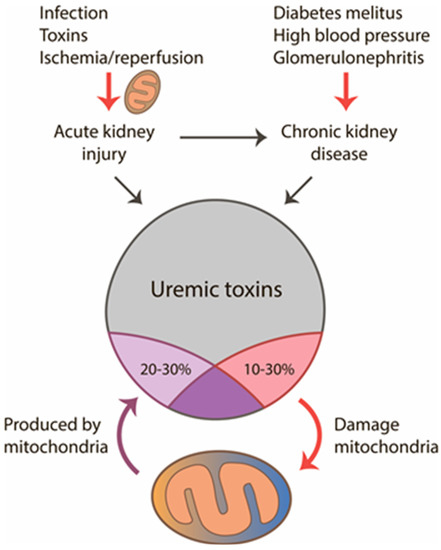