The importance of telomerase, the enzyme that maintains telomere length, has been reported in many malignancies in general and in multiple myeloma (MM) in particular. Proteasome inhibitors are clinically used to combat effectively MM. Since the mechanism of action of proteasome inhibitors has not been fully described we sought to clarify its potential effect on telomerase activity (TA) in MM cells. Previously we showed that the first generation proteasome inhibitor bortezomib (Brt) inhibits TA in MM cells by both transcriptional and post-translational mechanisms and has a potential clinical significance. In the current study we focused around the anti- telomerase activity of the new generation of proteasome inhibitors, epoxomicin (EP) and MG-132 in order to clarify whether telomerase inhibition represents a class effect. We have exposed MM cell lines, ARP-1, CAG, RPMI 8226 and U266 to EP or MG and the following parameters were assessed: viability; TA, hTERT expression, the binding of hTERT (human telomerase reverse transcriptase) transcription factors and post-translational modifications. Epoxomicin and MG-132 differentially downregulated the proliferation and TA in all MM cell lines. The downregulation of TA and the expression of hTERT were faster in CAG than in ARP-1 cells. Epoxomicin was more potent than MG-132 and therefore further mechanistic studies were performed using this compound. The inhibition of TA was mainly transcriptionally regulated. The binding of three positive regulator transcription factors: SP1, c-Myc and NF-κB to the hTERT promoter was decreased by EP in CAG cells as well as their total cellular expression. In ARP-1 cells the SP1 and c-MYC binding and protein levels were similarly affected by EP while NF-κB was not affected. Interestingly, the transcription factor WT-1 (Wilms’ tumor-1) exhibited an increased binding to the hTERT promoter while its total cellular amount remained unchanged. Our results combined with our previous study of bortezomib define telomerase as a general target for proteasome inhibitors. The inhibitory effect of TA is exerted by several regulatory levels, transcriptional and post translational. SP1, C-Myc and NF-κB were involved in mediating these effects. A novel finding of this study is the role of WT-1 in the regulation of telomerase which appears as a negative regulator of hTERT expression. The results of this study may contribute to future development of telomerase inhibition as a therapeutic modality in MM. View Full-Text
Keywords: proteasome inhibitors; telomerase; multiple myeloma cells proteasome inhibitors; telomerase; multiple myeloma cells
►▼ Show Figures 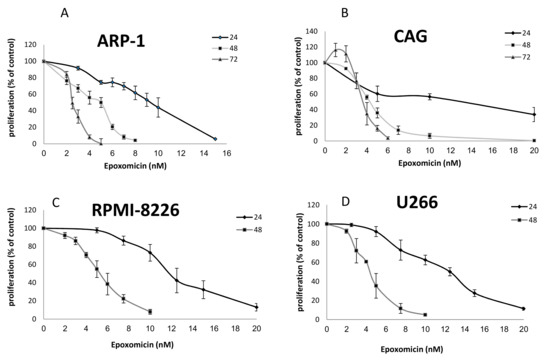