Hydrogen Peroxide: Its Role in Plant Biology and Crosstalk with Signalling Networks
Previous Article in Journal

α-thalassemia X-linked mental retardation (ATR-X, OMIM Entry #301040) syndrome is caused by ATRX mutations [1,2]. ATR-X syndrome is characterized by various clinical manifestations, including severe intellectual disability, facial dysmorphism, genital abnormalities, and epileptic seizures [3]. ATR-X syndrome is very rare, probably with an incidence of less than 1/100,000 live-born males [4]. ATRX encodes a protein containing two signature domains. The helicase domain has chromatin remodeling activity and DNA translocaze ability. The ATRX-DNMT3-DNMT3L (ADD) domain binds histone H3 tails at H3K4me0K9me2/3 [5,6,7,8,9]. However, the functions of ATRX protein remain unclear.
Several ATRX mutations or low ATRX gene expression have been identified in patients with ATR-X syndrome [8,9,10,11]. ATR-X patients with an Arg37Stop (R37X) mutation in exon 2 exhibit mild intellectual disability, which is accompanied by reduced expression of ATRX protein in lymphoblastic cells [12,13]. We previously reported that Atrx mutant mice lacking exon 2 (AtrxΔE2 mice) express a mutant protein that corresponds to a variant of an R37X mutation seen in human ATR-X syndrome [14]. AtrxΔE2 mice exhibited an 80% reduction in ATRX protein levels [14,15,16], similar to outcomes observed in 27 individuals with ATR-X syndrome [9]. The mice also show cognitive defects and abnormal dendritic spine formation in the medial prefrontal cortex (mPFC) [15] and, consistent with features of intellectual disability [17,18], show longer and thinner dendritic spines compared with wild-type (WT) mice [15].
The morphology of dendritic spines relates closely to the function and plasticity of the synapses. For example, the volume of the spine head is directly proportional to the area of postsynaptic density and the number of postsynaptic receptors, and, hence, the size of synaptic currents and synaptic strength [19,20,21,22]. Such spine anomalies have been reported in several neurological disorders associated with cognitive dysfunction, including Alzheimer’s diseases, schizophrenia, and intellectual disability [17,18,23,24].
Activation of the sigma-1 receptor (Sig-1R) can induce potent neuroprotective and neuroregenerative effects by promoting the activity of neurotrophic factors, including brain-derived neurotrophic factor (BDNF) [25,26]. BDNF is an important neurotrophic factor linked with neuronal development, synaptic maturation and neural plasticity [27,28,29]. The activation of BDNF pathways improved learning and memory in intellectual disability model mice, such as Rett syndrome and Fragile-X syndrome [30,31]. Here, we show that Sig-1R activation with SA4503, a potent activator of Sig-1R [32], features potential as a therapeutic intervention for diminished cognitive function in ATR-X syndrome.

We investigated changes in synaptic morphology using cultured cortical neurons from AtrxΔE2 mice. To analyze axon development and dendritic filopodia, we labeled cultured neurons by transfection with EGFP at DIV0 and investigated these morphologies at DIV5. We first examined the effect of the Atrx gene mutation on the outgrowth of axons (Figure 1A3). Quantification revealed that the lengths of the axons were significantly reduced in AtrxΔE2 compared to those of WT neurons. The decreases of axon length in AtrxΔE2 neurons were significantly restored at 48 h after SA4503 treatment (Figure 1B) (The axon length; WT + vehicle, 453.5 ± 13.3 µm; WT + SA4503, 445.5 ± 15.1 µm; AtrxΔE2 + vehicle, 300.1 ± 14.5 µm; AtrxΔE2 + SA4503, 419.6 ± 22.3 µm). As dendritic spines originate from dendritic filopodia, we hypothesized that AtrxΔE2 neurons change the development of these structures. The number of filopodia was significantly increased in cultured neurons of AtrxΔE2 mice relative to the number measured in WT mice (Figure 1C), and cultured neurons from AtrxΔE2 mice treated with SA4503 showed a significant decrease in the number of filopodia (Figure 1A4,C) (The number of filopodia per 20 µm dendritic length; WT + vehicle, 2.1 ± 0.3; WT + SA4503, 2.1 ± 0.4; AtrxΔE2 + vehicle, 7.7 ± 0.4; AtrxΔE2 + SA4503, 3.8 ± 0.4).

Next, we explored whether the expression of the BDNF protein was altered in AtrxΔE2 mice. We observed significant decreases in the levels of the BDNF protein in the mPFC of AtrxΔE2 relative to WT mice without changes in the mRNA level; treatment with SA4503 reversed the decrease (Figure 4A,B). However, there was no significant change in NR1, a down stream target of BDNF, or in the Sig-1R protein expression between groups. Sig-1Rs act on restoring Ca2+ transferring into mitochondria and ATP productions in Chinese hamster ovary (CHO) cells [33] and neuroblastoma Neuro-2a cells [34], as well as changes in mitochondrial morphology in SA4503-treated cardiomyocytes [35]. We investigated mitochondrial morphology in axons of cultured cortical neurons at DIV5 with the mitochondrial-specific marker, MitoTracker Red. There were no significant changes in mitochondrial length or the roundness index between the groups (Figure 4D), suggesting that Sig-1Rs have no effect on either mitochondrial degradation or enhanced mitochondrial fusion in Atrx depletion or cultured cortical neurons.

Mice (C57BL/6J) were housed under climate-controlled conditions with a 12-h light/dark cycle and were provided with standard food and water ad libitum. Animal studies were conducted in accordance with the Tohoku University institutional guidelines. Ethical approval (9 November 2015) was obtained from the Institutional Animal Care and Use Committee of the Tohoku University Environmental and Safety Committee. The generation of homozygous AtrxΔE2 mice is described in a previous study [14]. In brief, to construct an Atrx targeting vector, a 2-kb EcoRV-SpeI genomic fragment of the Atrx gene and a 5.5-kb XhoI-BamHI fragment were used as short and long homologous regions, respectively. The IRES-beta-geo cassette with a splicing acceptor site was used to replace the SpeI-XhoI fragment, which contains exon 2. The targeting vector was transfected into J1 ES cells, and G418-resistant clones were selected. Homologous recombinants were identified by Southern blot analysis. AtrxΔE2 mice were backcrossed six generations onto C57BL/6J. For RT-qPCR, immunoblotting and behavioral analyses, male mice at 10–12 weeks of age were used.

Primary cultures of neurons were obtained using previously described methods [16]. Briefly, cortical tissue was dissected from Embryonic-Day-18 mice and dissociated by trypsin treatment and trituration through a Pasteur pipette. Neurons were plated on coverslips coated with poly-l-lysine in MEM (Invitrogen, Carlsbad, CA, USA). After cell attachment, coverslips were transferred to dishes containing a glial cell monolayer and maintained in Neurobasal Medium (Invitrogen) containing 2% B27 supplement (Invitrogen) and 1% GlutaMax (Invitrogen). Cytosine β-d-arabinofuranoside (5 µM; Sigma-Aldrich, St. Louis, MO, USA) was added to cultures at 3 days in vitro (DIV3) after plating to inhibit glial proliferation. Primary neurons were transfected with GFP (green fluorescent protein) expression vector using electroporation at DIV0. For electroporation, mixture of the single cell suspension with plasmid DNA made its final concentration reach 3 × 105 cells and 5 µg plasmid DNA (1 µg/µL) in 100 µL Opti-MEM® medium. Two pulses of 275 V, 0.5 ms each at 50 ms intervals, were delivered through electroporation cuvettes (2 mm gap) with an electroporator (NEPA21; NEPAGENE, Chiba, Japan). Cortical neurons were harvested at DIV5 and DIV24. These time points correspond to neuronal developmental stages of axon formation and dendrite outgrowth (stage 4) and synaptogenesis and maturation (stage 5), respectively [58,59]. Differential distributions of axons and dendrites could be detectable from DIV3, because axons elongate 5–10 times faster than dendrites; longer neurites could thus be identified as axons [60].

SA4503 was synthesized in the Laboratory of Medicinal Chemistry, Zhejiang University according to previously described methods [61]. SA4503 (1 µM, dissolved in distilled water) was treated for 48 h in cultured cortical neurons in both DIV5 and DIV24. Mice were randomized into four groups corresponding to differential drug administration as follows: We administered SA4503 over the course of 2 weeks (1 mg/kg, intraperitoneally (i.p.) daily from postnatal day (P) 70 to P84) to AtrxΔE2 mice and subsequently assessed memory-related behaviors. In studies on learning and memory, effective doses of SA4503 are commonly 1.0 mg/kg or less for rodents [62,63]. A diagram of the experimental schedule is given as Figure 5.

Immunoblotting analysis was performed as previously described [16]. Briefly, tissues were homogenized in a buffer containing 50 mM Tris-HCl (pH 7.5), 0.5% Triton X-100, 0.15 M NaCl, 4 mM EDTA, 4 mM EGTA, 1 mM Na3VO4, 50 mM NaF, 1 mM dithiothreitol and protease inhibitors (2 µg/mL pepstatin A, 1 µg/mL leupeptin, and 2 µg/mL trypsin inhibitor), and then treated with Laemmli’s sample solution and boiled for 3 min. Bradford protein assay was used to measure the concentration of total protein in a sample. Equivalent amounts of protein (5 µg) were electrophoresed on SDS-PAGE and proteins were then transferred to an Immobilon polyvinylidene difluoride membrane. The procedure of immunoblotting analyses were carried out as previously described [16]. For housekeeping protein, β-tubulin was used as loading control.

Spine-head diameters were measured along an axis perpendicular to the spine neck, approximately in the middle of the spine head. Spine length was calculated as the radial distance from the tip of the spine head to the dendritic shaft. The spine diameter corresponded to the maximum dimension of the spine head. In cases where the spine head showed irregular morphology, or if the spine-head maximum diameter was not perpendicular to the neck, we measured the maximum head diameter. Spines were categorized according to a previously described method [64] along an immature- to mature-appearing spine continuum. Measurements were obtained using ImageJ (National Institutes of Health freeware).

Mice were subjected to behavioral tests including the Y-maze, novel object recognition and Barnes maze tasks. The videotapes for all behavioral analyses were scored by a trained observer blind to the genotype and treatment. In the Y-maze task using apparatus consisted of three identical arms (50 × 16 × 32 cm3) of black Plexiglas, spontaneous alternation behavior in a Y-maze was assessed as a task of spatial reference memory. An alternation was defined as consecutive entries into all three arms. The maximum number of alternations was defined as the total number of arms entered minus two, and the percentage of alternations was calculated as actual alternations/maximum alternations × 100. The total number of arms entered during the session was also determined. The novel object recognition task used an open-field box (35 × 25 × 35 cm3). During the acquisition phase, two objects of the same material were placed symmetrically in the center of the chamber for 10 min. After 24 h, one object was replaced by a novel object, and exploratory behavior was analyzed again for 5 min. Exploration of an object was defined as rearing on the object or sniffing it at a distance of <1 cm, touching it with the nose or both. Discrimination of spatial novelty was assessed by comparing the difference between exploratory contacts of novel and familiar objects and the total number of contacts with both, making it possible to adjust for differences in total exploration contacts. The Barnes maze consists of a circular platform (92 cm in diameter) with 20 holes (hole diameter: 5 cm) along its perimeter. At the beginning of each trial, the mouse was placed in the middle of the maze in a cylindrical start chamber (7.5 cm). After 10 s, the chamber was lifted and the mouse was free to explore the maze. The test ended when the mouse entered the goal tunnel or after 3 min elapsed. Immediately after the mouse entered the tunnel, the mouse was allowed to stay in the tunnel for 1 min. Mice were trained for two trials per day for 4 days. Errors and search time required to escape into the tunnel were recorded as the test parameters; errors were defined as nose pokes and head deflections over any hole that did not lead to a tunnel.

We thank Isao Kitajima for kindly providing AtrxΔE2 mice, deposited in the RIKEN BioResource Center (RBRC04937). This research was partially supported by the Practical Research Project for Rare/Intractable Diseases from the Japan Agency for Medical Research and Development (AMED) (N.S. and K.F.). This work was also supported by MEXT/JSPS KAKENHI (25110705) to N.S and KAKENHI (24659024) to K.F. 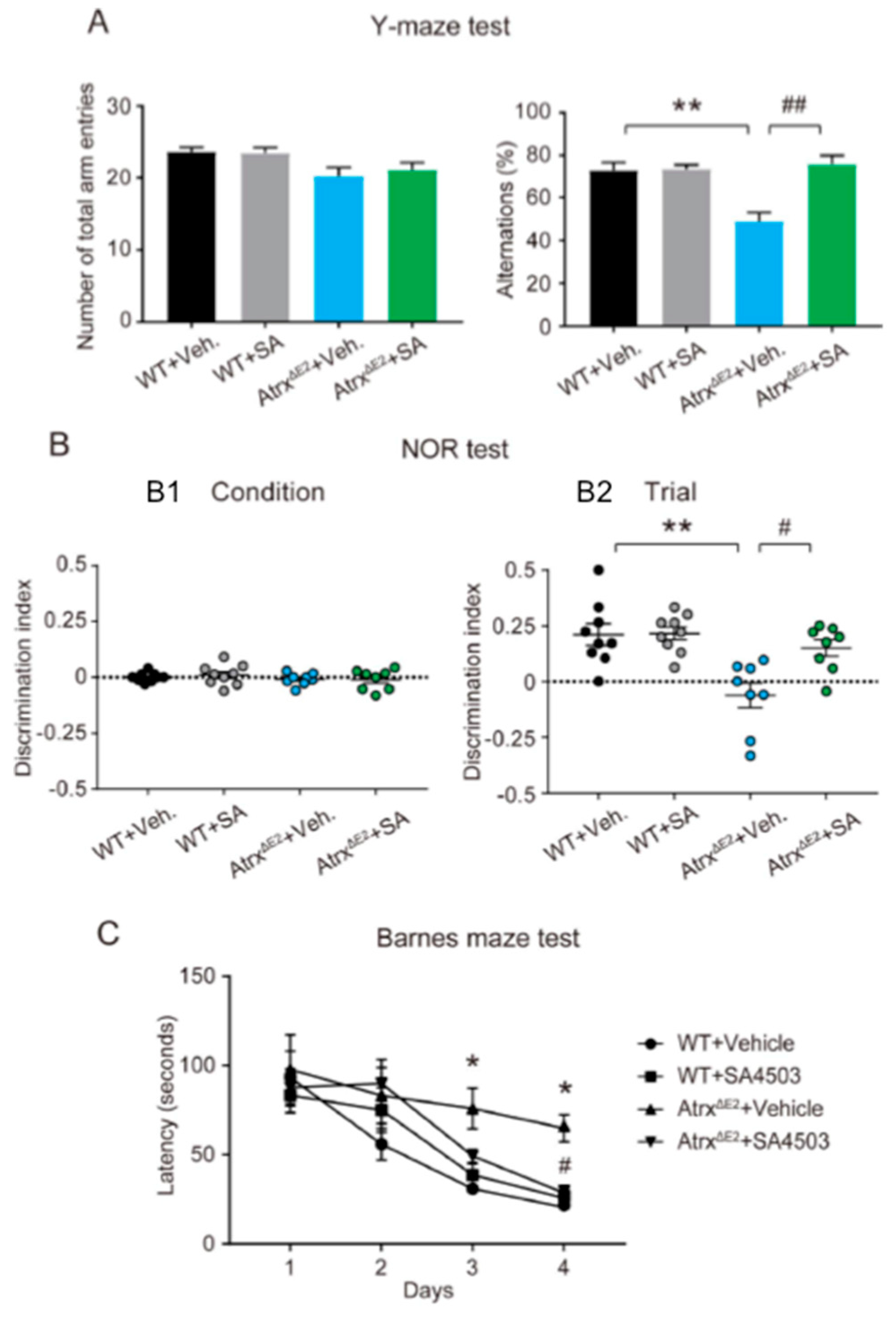 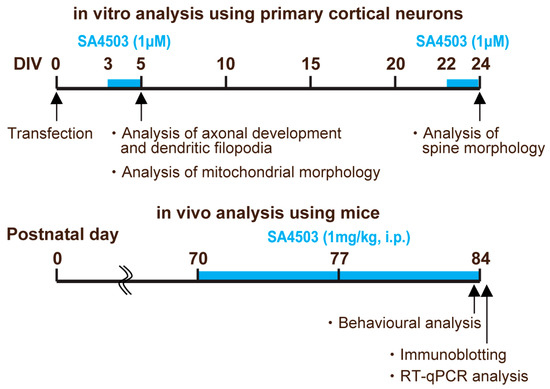 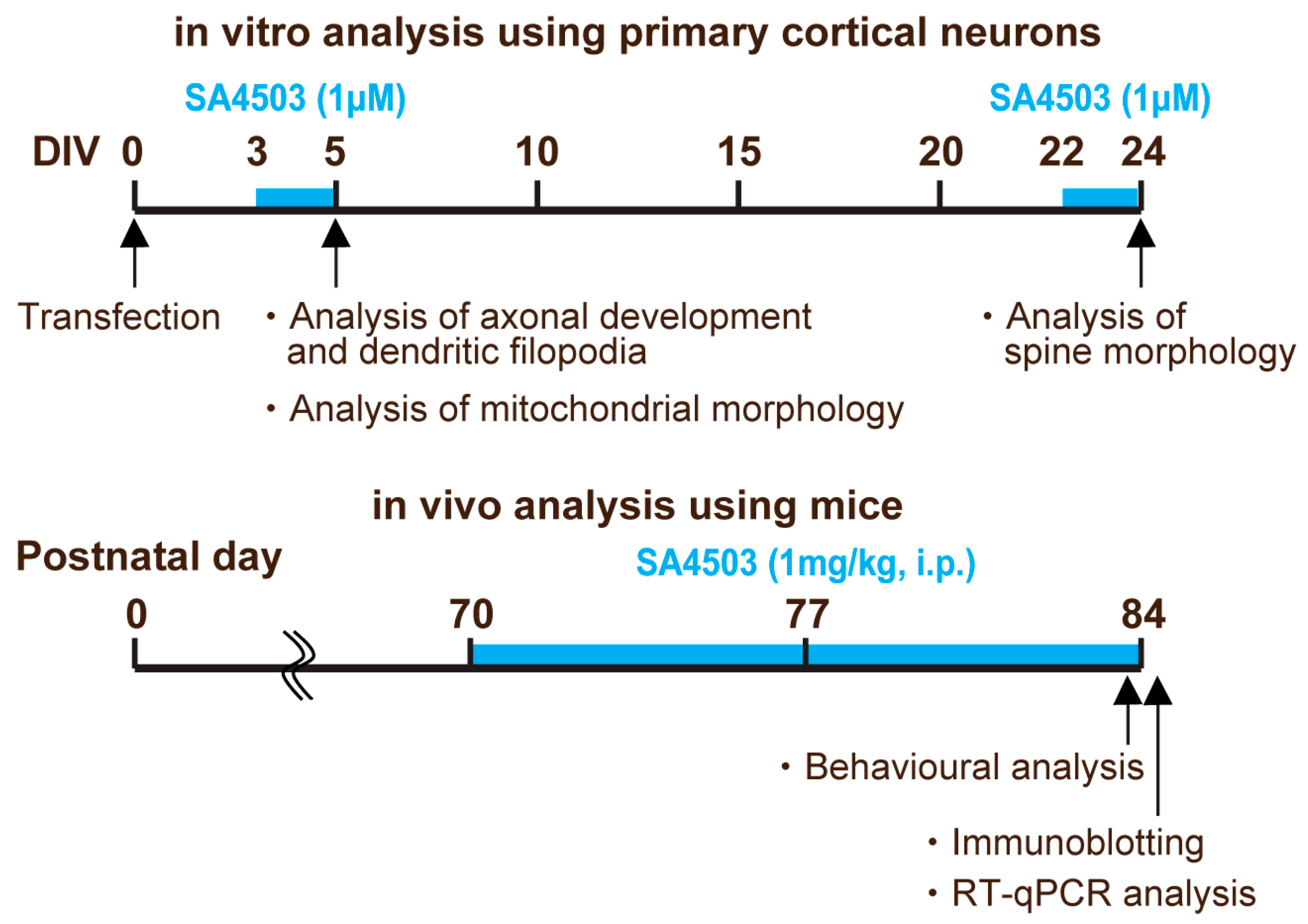