Pulmonary hypertension (PH) corresponds to an abnormal increase of the mean resting pulmonary arterial pressure to over 25 mmHg, which is associated with increased pulmonary vascular resistance, right ventricle (RV) hypertrophy and ultimately RV failure and death in those patients [1]. In chronic obstructive pulmonary disease (COPD), hypoxic PH (group 3 PH) occurrence is much more frequent compared with the healthy population, starting from 5% at the beginning (mild-to-moderate COPD) to more than 35% as the disease progresses over time (very severe COPD) [2]. PH is associated with a remodeling of small pulmonary arteries, which increases the hemodynamic resistances, leading to RV hypertrophy [1]. This could result in death as a consequence of right ventricle failure, making cardiovascular disorders the most frequent comorbidity in COPD [3]. This vascular remodeling of the pulmonary arteries is thought to result from chronic hypoxia (CH) exposure [2]. Indeed, CH induces cell proliferation by inhibiting anti-mitogenic factors, such as nitric oxide or prostacyclin, and by enhancing mitogenic stimuli, such as endothelin-1, platelet-derived growth factor or vascular endothelial-derived growth factor [4]. Moreover, CH could increase PH by the growth of extracellular matrix components [5]. In addition to CH, the chronic inflammation of COPD patients [6], enhanced by the oxidative stress and shear stress due to the friction of the red cells on the vessel walls, could contribute to the aberrant proliferation of vessel cells and to the development of cardiopulmonary pathologies [7].
Recent studies suggest that histone deacetylases (HDAC) could be involved in an epigenetic control of pulmonary arterial smooth muscle cells development and function, as shown in a newborn sheep model [8]. Targeting these epigenetic mechanisms with HDAC inhibitors successfully restored normal pulmonary arterial tension in models of pulmonary arterial hypertension (PAH) [9] and PH [10,11]. Besides PH related to group 3, PAH pathogenesis implicates several proteins whose expression is dependent on bromodomain (Brd)-containing proteins involved in the reading of acetylations [12,13]. Meloche et al. reported that treatment with JQ1, an inhibitor of Brd and extra-terminal domain (BET) proteins, could restore pulmonary arterial tension, as well as oncogene and cell cycle protein regulators, involved in the PAH control levels [13]. Indeed, in the hypoxia/Sugen 5416 (VEGF receptor antagonist) model [14], animals treated with such an inhibitor showed transcription levels of survival markers, NFATc2 and Bcl-2, similar to those of the control groups. JQ1 also strongly reduced the proliferation of pulmonary arterial smooth muscle cells, in parallel with an increase in apoptosis, which restored the cell cycle activity to that of control animals [13].
These results suggest that the effects of hypoxia on acetylation pathways [15] could have a specific role in these vascular alterations in COPD. However, inflammation is also known to affect acetylation signaling pathways [16] and could contribute, as another significant factor, to PH development. The specific role of these 2 stimuli on epigenetic factors has not been investigated in PH development COPD yet, although several tissues show modifications of acetylation signaling pathways in these patients [17,18].
We hypothesize that the use of inhibitors of BET proteins could be of potential interest for the control of the PH, which develops with the severity of the COPD, through epigenetic regulation over time. Our aim was to use I-BET151, an inhibitor of the BET domain, to determine if BET proteins are involved in the development of right ventricle hypertrophy and PH, induced on a model of CH combined with pulmonary inflammation (PI), two main stimuli encountered in COPD.

2.1. Lipopolysaccharides (LPS) Instillations Are Associated with Signs of Lung Alterations

Repeated LPS instillations had significant effects on lung structure, as depicted in Figure 1, including smaller alveolar size in the chronic hypoxia plus inflammation (CHPI) groups, whether there was I-BET151 administration (CHPI-iB, Figure 1D) or not (CHPI-v, Figure 1C), compared to the groups without LPS instillations (N-v and N-iB, Figure 1A,B, respectively). Image analysis showed that the alveolus number was similar in all groups (Figure 1E), but that total alveolar area was significantly smaller in groups with LPS instillations compared to non LPS groups (Figure 1F) as well as the alveolar area (Figure 1G). Moreover, the alveolar wall was significantly thicker in LPS-treated (CHPI-v and CHPI-iB) groups compared with non-LPS (N-v and n-iB) groups (Figure 1H). Additionally, the I-BET151 treatment did not have a significant effect on these LPS-induced alterations.

2.2. Inhibition of BET Proteins Reverses Hypertension of the Right Ventricle

2.3. Inhibition of BET Proteins Has No Effect on Left Ventricle

In our model, the LV + IVS weight, expressed as a function of the body weight, was not altered by CH or PI (Figure 3A). Likewise, analysis of the LV systolic pressure, presented in Figure 3B, did not show any significant differences in N-iB, CHPI-v or CHPI-iB when compared to the N-v group (respectively −12%, +5%, −11%, ns). Contraction and relaxation speed parameters (Figure 3C,D) were neither modified by CH and PI, nor by I-BET151 administration, when compared to N-v animals.

Male adult Wistar rats (4 month-old, 392 ± 7 g) were used in this study. Procedures were carried out in accordance with European Directives 86/609/EEC, 2010/63/UE and the GSK policy on the care, wellbeing and treatment of animals. All the procedures were approved by the local ethics committee, affiliated with the animal facility of the university (D3842110001), on 21/01/2013, and agreed to by the French Ministry of Research (345_LBFA-U1055). Animals were assigned to one of the four following groups (Figure 5): Normoxia + vehicle (N-v), normoxia + I-BET151 (N-iB), chronic hypoxia + pulmonary inflammation + vehicle (CHPI-v), chronic hypoxia + pulmonary inflammation + I-BET151 (CHPI-iB).
At sacrifice, hematocrit measurements were performed using glass capillaries and centrifuged at 17 000 g for 3 min (Haemofuge A, Heraus, Grésy-sur-Aix, France). The RV and the left ventricle + Interventricular Septum (LV + IVS) were dissected, separated and weighted. RV hypertrophy was assessed, post mortem, as the weight ratio of the right ventricle free wall to the LV + IVS, known as the Fulton index. Lung portions were collected and frozen in liquid nitrogen for subsequent morphological analysis.

PI was induced by the bi-weekly intratracheal administration of lipopolysaccharides (LPS) 0.4 mg/mL, diluted in NaCl 0.9% for 4 weeks (1 mL/kg of body weight; E. coli, serotype O55:B5; Sigma-Aldrich Chemical Co.™, St Louis, MO, USA). This model is reported to induce airway remodeling, with similarities to those observed in COPD patients [25,26].
During the last 14 days of the PI protocol, animals were exposed to a either chronic normoxia (N groups) or normobaric hypoxia (CH groups, FiO2: 10%). The hypoxia chamber was opened for 45–60 min per day to weigh animals and perform LPS administration and nursing, as previously described [27].

The I-BET151, also referenced as GSK1210151 (GlaxoSmithKline™, London, UK), was administered daily by oral gavage (10 mg/mL/kg of body weight in methyl cellulose 400 cp, 1% in H2O) during the last week before sacrifice. Untreated animals received the same volume of vehicle.

Sections of frozen lung were cut on glass slides, air dried, and then stained using hematoxylin and eosin. The slides were immersed in Mayer’s hematoxylin (DAKO, Glostrup, Denmark) for 30 s, rinsed with tap water until clear, dipped in eosin (Sigma-Aldrich Chemical Co.™, St Louis, MO, USA) for 10 s, and again rinsed with tap water. The slides were air-dried at room temperature and then dipped twice in 95% ethanol, twice in 100% ethanol, twice in 50% ethanol, 50% xylene solution, and twice in 100% xylene. Finally, coverslips were mounted using a Permount® medium (Fisher Scientific, Waltham, MA, USA). Slides were then observed under a standard light microscope, and images were analyzed for structural indices, including alveolar density and size, and epithelial wall thickness using ImageJ software.

Heart rate, systolic pressure in the Right Ventricle (RV) and Left Ventricle (LV) were measured, in situ at sacrifice (Figure 5), using a Millar microprobe (SPR-249A, Millar Inc., Gulf Fwy, Houston, TX, USA), associated with a transducer (TC-100, Millar Inc.) and an electromanometer (Gould 2200 recorder, Millar Inc.). Animals were anesthetized with sodium pentobarbital (50 mg/kg of body weight). The pressure catheter was introduced in the jugular vein up to the RV or in the carotid artery up to the LV, as described previously [13,33]. Relaxation and contraction times were obtained by deriving the curve of the ventricle pressures (respectively dP/dtmin and dP/dtmax).

All the data are presented as mean ± SEM and were analyzed using a one-way Analysis of Variance (ANOVA) as they were normally distributed. If an effect was detected, a Holm-Sidak post-hoc analysis was performed. Correlation coefficients were calculated as a Pearson product moment. Statistical significance was accepted at p < 0.05.

Our study describes novel beneficial effects of I-BET151 under conditions of pulmonary hypertension, induced by chronic hypoxia and pulmonary inflammation. This novel insight argues for a translation of I-BET drugs from animal models to patients, in order to reverse group 3 PH in COPD, for which no registered treatments exist [1,34]. Indeed, I-BET151 treatment could be an asset to the restoration of hemodynamic parameters, but further experiments are mandatory to evaluate the net balance of benefits to risks before translation to patients with PH secondary to COPD.

R.F. N.S. and R.K.P. are employees and shareholders at GlaxoSmithKline, which is progressing BET protein inhibitors through clinical development. C.C., S.K., S.R., S.V., U.S., C.P. and H.D. do not have anything to disclose regarding funding or conflicts of interest with respect to this manuscript. 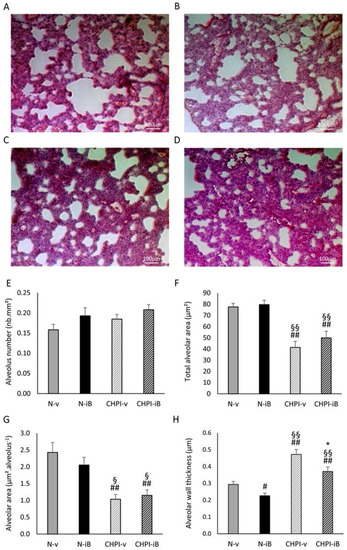 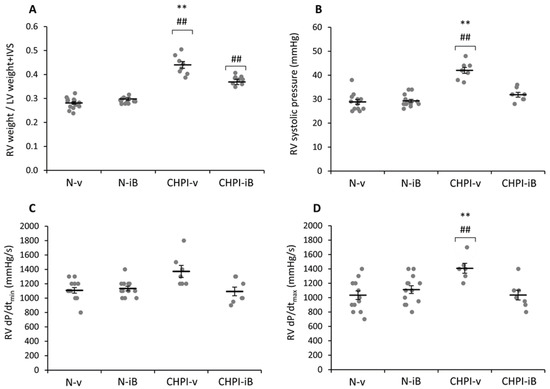 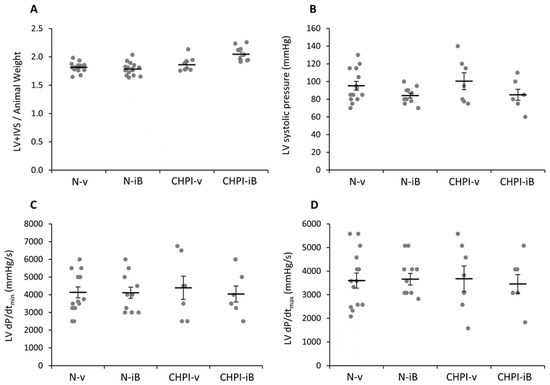 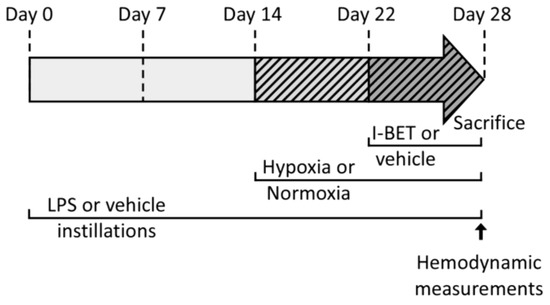