Comparative Proteomic Profiling between Each of Two Consecutive Developmental Stages of the Solanum Fruit Fly, Bactrocera latifrons (Hendel)
Next Article in Special Issue

Facial wrinkles are known as one of the most prominent features for skin aging [1]. Skin aging is usually classified as either intrinsic (chronological) and extrinsic (photoaging) aging. Extrinsic aging shows photoaged skin with rough wrinkles mainly due to exposure to sunlight including ultraviolet B, while intrinsic aging is induced by aging genetic factors with a pale and smooth wrinkle formation [2]. It is well documented that the loss of skin elasticity and degradation of elastic fibers and collagen are usually shown in aged or wrinkled skin [3,4]. Previous evidence reveals that reactive oxygen species (ROS) in dermal fibroblast and epidermal keratinocyte produce matrix metalloproteinases (MMPs) to induce collagen degradation leading to skin aging, since MMPs degrade the extracellular matrix, including collagen fibers and thus contributes to wrinkle formation [5]. Marked loss of fibrillin-positive structures such as collagen type IV, VII and XVII in dermal and epidermal junctions contribute to wrinkles by weakening the bond between the dermis and epidermis [6,7]. In particular, UVB exposure upregulates the expression of MMP-1, -3 and -9 as well as sonic hedgehog (SHH) and GLI1 [8,9] in the human epidermis to induce wrinkle formation. Thus, recently many phytochemicals such as magnolo l [10], abietic acid [11], Galla Chinensis extract [12] and green tea polyphenols [13] were reported to block skin damage due to chronic UVB irradiation. Additionally, melatonin was reported to protect human keratinocytes from UVB-induced oxidative stress and DNA damage. Nevertheless, the anti-wrinkle mechanism of melatonin still remains unclear to date. Thus, in the present study, the anti-wrinkle molecular mechanism of melatonin was investigated in t-BOOH or UVB treated human keratinocytes and UVB irradiated SKH-1 hairless mice.

To determine whether melatonin inhibits UVB-induced MMP-1(photoaging marker) related proteins, Western blotting was performed. After the exposure to UVB 30 mJ/cm2 for 10 min or 20 min, MMP-1 related proteins (p-ERK, pp-38, COX-2 and MMP-1) were significantly affected at UVB 30 mJ/cm2 for 10 min (Figure 4a). To determine the molecular mechanism of melatonin, we examined the effects of melatonin on the hedgehog signaling pathway, since hedgehog signaling (SHH/GLI1) plays a key role in inducing MMP-1 [18]. Consistently, melatonin reduced the expression of UVB-induced SHH and GLI1 at 1 and 2 mM (Figure 4b). Additionally, melatonin reduced the expression of p-NF-κB, p-ERK and COX-2 in the UVB-treated HaCaT keratinocytes, while the phosphorylation of NF-κB, ERK and COX-2 was increased by UVB irradiation (Figure 4b). Furthermore, melatonin suppressed the expression of MMP-1 in t-BOOH or UVB treated HaCaT keratinocytes (Figure 4c).

2.4. Melatonin Prevented Against Loss of Water on the Dorsal skin of SKH1 Hairless Mice Exposed to UVB

It is well known that UVB can induce skin damages such as melanogenesis, erythema and epidermal thickness in the epidermis, leading to wrinkle formation in the dermis [19]. As shown in Figure 5a, melatonin significantly reduced the loss of water on the dorsal skin of SKH-1 hairless mice 8 weeks after UVB treatments, while the loss of water was accentuated in the UVB alone treated control compared to untreated normal control.

2.5. Melatonin Suppressed the Degree of Wrinkles and Epidermal Thickness Induced by UVB Irradiation on the Dorsal skin of SKH1 Hairless Mice

Melatonin (N-acetyl-5-methoxytryptamine) is known to have multi-biological activities to regulate circadian rhythms [20] and to work as a hormone or neurotransmitter [21], and as an anti-inflammatory [22,23] and antioxidant [24] agent. Especially, melatonin suppressed the ROS production in rat lens [25] and IL-3 stimulated leukocytes [24] and also enhanced the survival of UVB treated keratinocytes by suppressing apoptosis [26].
Herein, the anti-wrinkle mechanism of melatonin was elucidated in t-BOOH or UVB treated HaCaT keratinocytes and UVB treated hairless mice.
Melatonin suppressed the ROS production and cytotoxicity in free radical initiator t-BOOH treated HaCaT keratinocytes, implying that melatonin protects HaCaT keratinocytes from t-BOOH induced cytotoxicity, since ROS play a pivotal role in skin damage by UVB-irradiation.
UVB-induced photoaging is initiated by the production of ROS [27,28], which activate several receptors for IL-1, keratinocyte growth factor and tumor necrosis factor (TNF)-α [29,30]. Activation of these receptors induces downstream signaling pathways of mitogen-activated protein kinases (MAPKs) such as p38, JNK and ERK, which lead to an increase of the nuclear transcription such as NF-κB and AP-1 [29,31,32]. Additionally, the activation of the transcription factor NF-κB induces the expression of inflammatory cytokines such as COX-2, IL-6 and MMPs [33,34]. Continuous UVB exposure induces expression of MMPs, which degrades collagen by collagen breakdown as well as by the inhibition of procollagen synthesis [35,36]. Interestingly, melatonin suppressed the expression of COX-2, p-ERK, p-NF-κB and MMP-1 and increased the expression of procollagen and collagen XVII in UVB induced HaCaT cells, indicating that melatonin inhibits inflammatory cytokines and photoaging markers, leading to an anti-wrinkle effect in the skin.
The accumulating evidence reveals that the Hedgehog (Hh) signaling pathway regulates normal growth but its abnormal activation can promote cancer progression and epidermal development [8,9,37,38]. Therefore, to identify the molecular mechanism associated with UVB-induced photoaging, the role of Hh signaling was evaluated in UVB treated HaCaT cells. Here, melatonin reduced the expression of UVB-induced SHH as a Hh ligand and GLI1 as a transcriptional effector of Hh pathway, demonstrating that melatonin exerts an anti-photoaging effect via the inhibited Hh signaling pathway.
It is well documented that UVB induces skin damages leading to wrinkle formation due to collagen degradation in the dermis [39,40]. Here, melatonin protected skin from wrinkle formation, transdermal water loss in UVB treated hairless mice comparable to positive control retinoic acid, indicating that melatonin works against wrinkle formation in the dermis possibly via inhibition of collagen degradation. Consistently, Masson’s trichrome staining revealed that melatonin treatment maintained the blue color staining for collagen and reduced the epidermal thickness compared to the UVB- alone-treated group in the dermis of the skin of UVB irradiated SKH-1 hairless mice, implying a protective effect of melatonin on wrinkle formation by collagen degradation.
Collectively, melatonin suppressed ROS production and the expression of MMP-1 in t-BOOH-induced HaCaT keratinocytes. Additionally, melatonin suppressed the expression of UVB-induced MMP-1 and MMP-1 related proteins (inflammatory proteins), increased procollagen in HaCaT keratinocytes and reduced the expression of hedgehog signaling proteins and protected against epidermal thickness, transdermal water loss, collagen degradation and wrinkle formation on the dorsal skin of UVB treated hairless mice. Overall, these findings demonstrate that melatonin protects against UVB induced oxidative skin damage including wrinkle formation via the inhibition of ROS, MMP-1 and the hedgehog signaling pathway.

HaCaT cells were treated with melatonin (0, 1 or 2 mM) for 24 h. After washing with phosphate-buffered saline (PBS), the cells were irradiated with 30 mJ/cm2 of UVB (312 nm) for 10 min using the CL-1000 Ultraviolet Crosslinker (Ultra-violet products Ltd, Cambridge, UK).

The cytotoxic effect of melatonin was assessed by using a 3-(4,5-dimethylthiazol-2-yl)-2,5-diphenyltetrazolium bromide (MTT) assay. In brief, HaCaT cells (1 × 104 cells/well) were seeded onto 96-well culture plates and treated to various concentrations of melatonin for 24 h. The cells were incubated with MTT (1 mg/mL) (Sigma Chemical, St. Louis, MO, USA) for 2 h and the formazan crystals were dissolved in DMSO. The Optical density (OD) was measured by using a microplate reader (Molecular Devices Co., CA, USA) at 570 nm wavelength. Cell viability was calculated as a percentage of viable cells in melatonin-treated group versus untreated control.

HaCaT cells were pretreated with melatonin for 24 h and then exposed to UVB irradiation (30 mJ/cm2). Then nuclear fraction of the cells was prepared using NE-PER nuclear and cytoplasmic extraction reagents (Thermo, Rockford, IL, USA) based on the manufacturer’s protocol for Western blotting with the GLI1 antibody.

The compound 2,7-Dichlorofluorescein diacetate (DCFH-DA) was used to measure the level of ROS production. HaCaT cells were pretreated with melatonin for 24 h, with t-BOOH (0.6 mM) for 6 h and then exposed to 5 μM DCFH-DA for 30 min at 37 °C. Fluorescence intensity was measured by FACSCalibur (Becton Dickinson, Franklin Lakes, NJ, USA).

Mice were kept in the room in conditions of 21.5 ± 2 °C and relative humidity of 40 ± 5% for 30 min. Skin moisture was measured in melatonin-treated mice using Corneometer CM 820 (Courage-Khazake, Koln, Germany).

The dorsal skin was obtained from the melatonin or retinoic acid treated group and control group mice by biopsy, fixed in 4% paraformaldehyde, dehydrated in ethanol and then embedded in paraffin. Approximately 10 μm-thick sections were deparaffinized and stained with hematoxylin-eosin (H&E) and Masson’s trichrome staining. Stained slides were then photographed using a light microscope (ZEISS ObserverAD2, Gottingen, Germany).

For statistical analysis of the data, the Sigmaplot version 12 software (Systat Software Inc., San Jose, CA, USA) was used. All data were expressed as means ± standard deviation (SD). A students t-test was used for the comparison of the two groups. The statistically significant differences were set at p values of <0.05 between the control and melatonin/retinoic acid treated groups.

This work is supported by the National Research Foundation of Korea (NRF) Grant funded by the Korea Government (MEST) (No. 2017R1A2A1A17069297). 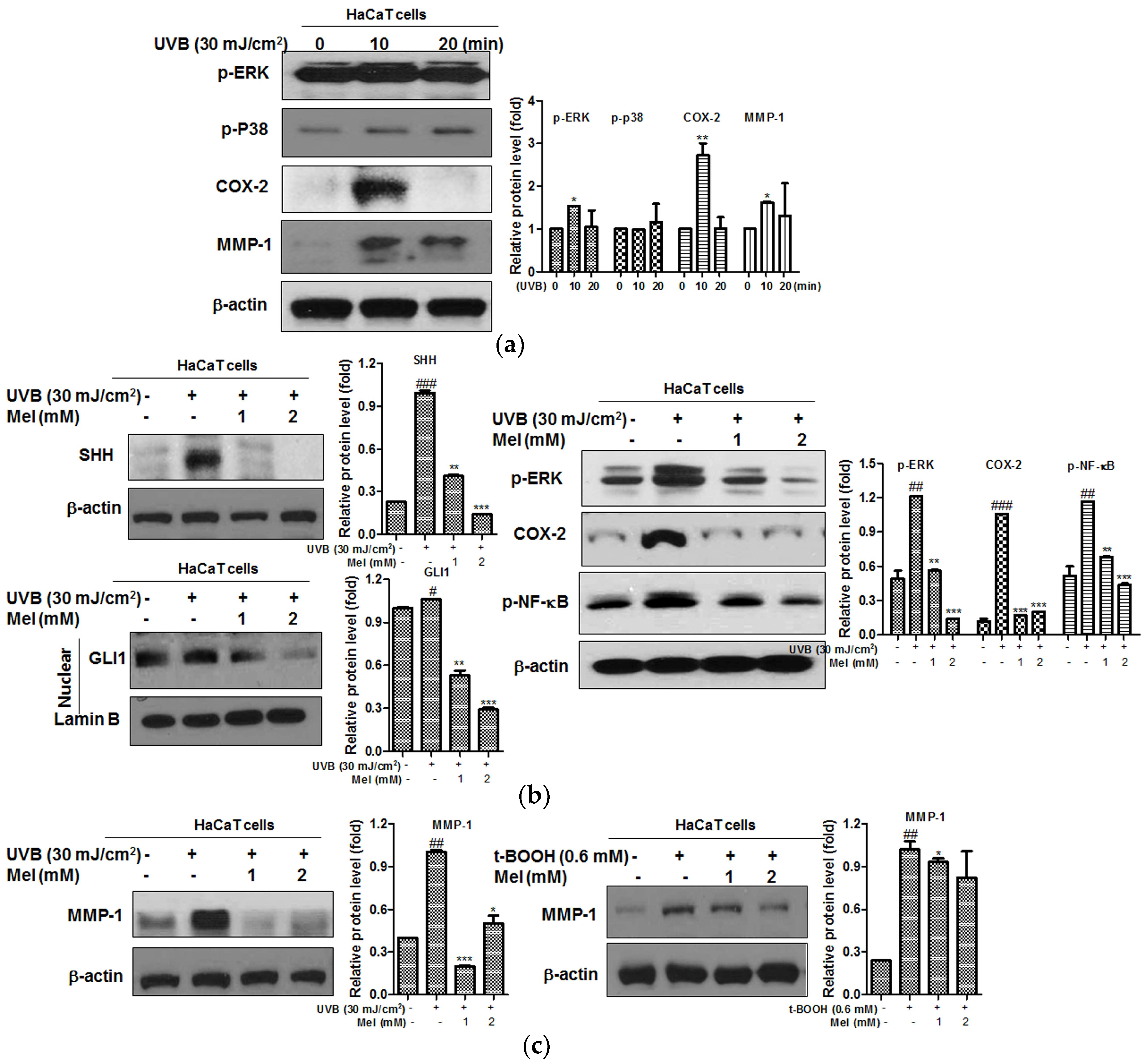