Thermoresponsive cell-culture polystyrene (PS) surfaces that are grafted with poly(N-isopropylacrylamide) (PIPAAm) facilitate the cultivation of cells at 37 °C and the detachment of cultured cells as a sheet with an underlying extracellular matrix (ECM) by reducing the temperature. However, the ECM and cell detachment mechanisms are still unclear because the detachment of cells from thermoresponsive surfaces is governed by complex interactions among the cells/ECM/surface. To explore the dynamic behavior of serum protein adsorption/desorption, thermoresponsive surfaces that correspond to thermoresponsive tissue-culture PS dishes were formed on sensor chips for quartz crystal microbalance with dissipation (QCM-D) measurements. X-ray photoelectron spectroscopy (XPS) measurements and temperature-dependent frequency and dissipation shifts, Δf and ΔD, using QCM-D revealed that the thermoresponsive polymers were successfully grafted onto oxidized, thin PS films on the surfaces of the sensor chips. Increased amounts of adsorbed bovine serum albumin (BSA) and fibronectin (FN) were observed on the thermoresponsive polymer-grafted surfaces at 37 °C when compared with those at 20 °C because of enhanced hydrophobic interactions with the hydrophobic, thermoresponsive surface. While the calculated masses of adsorbed BSA and FN using QCM-D were 3–5 times more than those that were obtained from radiolabeling, the values were utilized for relative comparisons among the same substrate. More importantly, the thermoresponsive, dynamic behavior of serum protein adsorption/desorption was monitored using the QCM-D technique. Observations of this dynamic behavior revealed that the BSA and FN that were adsorbed at 37 °C remained on both surfaces after decreasing the temperature to 20 °C. View Full-Text
Keywords: thermoresponsive polymer; poly(N-isopropylacrylamide); quartz crystal microbalance; thermoresponsive cell culture surface; cell sheet thermoresponsive polymer; poly(N-isopropylacrylamide); quartz crystal microbalance; thermoresponsive cell culture surface; cell sheet
►▼ Show Figures 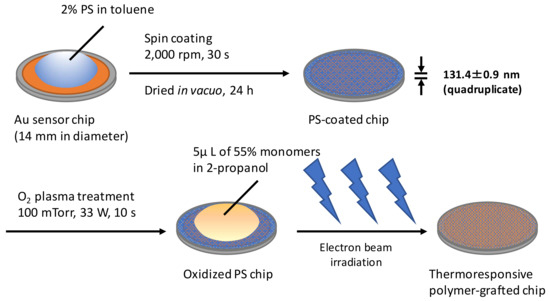